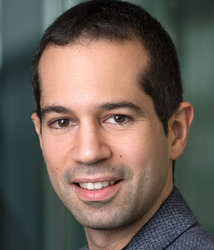 Davide Scaramuzza (born in 1980, Italian) is Professor of Robotics and Perception at both departments of Informatics (University of Zurich) and Neuroinformatics (University of Zurich and ETH Zurich), where he does research at the intersection of robotics, computer vision, and neuroscience. Specifically he investigates the use of standard and neuromorphic cameras to enable autonomous, agile, navigation of micro drones in search-and-rescue scenarios.

He did his PhD in robotics and computer vision at ETH Zurich (with Roland Siegwart) and a postdoc at the University of Pennsylvania (with Vijay Kumar and Kostas Daniilidis). From 2009 to 2012, he led the European project sFly, which introduced the PX4 autopilot and pioneered visual-SLAM-based autonomous navigation of micro drones.
For his research contributions in vision-based navigation with standard and neuromorphic cameras, he was awarded the IEEE Robotics and Automation Society Early Career Award, the SNSF-ERC Starting Grant, a Google Research Award, KUKA, Qualcomm, and Intel awards, the European Young Research Award, the Misha Mahowald Neuromorphic Engineering Award, and several conference paper awards.
He coauthored the book "Introduction to Autonomous Mobile Robots" (published by MIT Press; 10,000 copies sold) and more than 100 papers on robotics and perception published in top-ranked journals (TRO, PAMI, IJCV, IJRR) and conferences (RSS, ICRA, CVPR, ICCV).
In 2015, he cofounded a venture, called Zurich-Eye, dedicated to the commercialization of visual-inertial navigation solutions for mobile robots, which later became Facebook-Oculus Switzerland and Oculus' European research hub. He was also the strategic advisor of Dacuda, an ETH spinoff dedicated to inside-out VR solutions, which later became Magic Leap Zurich.
Many aspects of his research have been prominently featured in the popular press, such as The New York Times, Discovery Channel, BBC, IEEE Spectrum, MIT Technology Review Magazine.

Due to their resilience to motion blur and high robustness in low-light ...
Florian Mahlknecht, et al. ∙

We tackle the problem of minimum-time flight for a quadrotor through a s...
Robert Penicka, et al. ∙

In this paper, we tackle the problem of flying a quadrotor using time-op...
Angel Romero, et al. ∙

Perception-Aware Perching on Powerlines with Multirotors

We tackle the problem of planning a minimum-time trajectory for a quadro...
Robert Penicka, et al. ∙

Learning High-Speed Flight in the Wild

Quadrotors are agile. Unlike most other machines, they can traverse extr...
Antonio Loquercio, et al. ∙

Multicopters are among the most versatile mobile robots. Their applicati...
Leonard Bauersfeld, et al. ∙

Bridging the Gap between Events and Frames through Unsupervised Domain Adaptation

Quadrotors are among the most agile flying robots. However, planning tim...
Philipp Foehn, et al. ∙

Event-driven Vision and Control for UAVs on a Neuromorphic Chip

Quadrotors are extremely agile, so much in fact, that classic first-prin...
Leonard Bauersfeld, et al. ∙

How to Calibrate Your Event Camera

In many robotic tasks, such as drone racing, the goal is to travel throu...
Yunlong Song, et al. ∙

Autonomous Quadrotor Flight despite Rotor Failure with Onboard Vision Sensors: Frames vs. Events