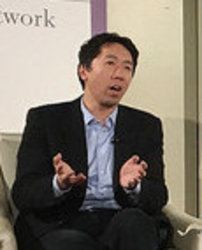 Andrew Yan-Tak Ng is a Chinese English computer scientist, manager, investor and businessman. Ng co-founded and led Google Brain and was a former VP & Chief Scientist in Baidu, building a group of several thousand people to form an artificial intelligence company. He is a deputy professor at the University of Stanford. Ng is also an early online pioneer, which led to Coursera’s co-foundation and deeplearning.ai. He has launched and manages AI Fund, an investment fund of $175 million to support artificial intelligence start-ups.

Ng was born in the United Kingdom in London in 1976. His parents were both Hong Kong parents. He spent time in Hong Kong and Singapore and graduated from the Singapore Raffles Institution in 1992. He graduated from Carnegie Mellon University in Pittsburgh, Pennsylvania in 1997 with a triple bachelor’s degree in computer science, statistics and economics.

Ng graduated in 1998 from the Massachusetts Institute of Technology in Cambridge, Massachusetts and in 2002 received a PhD degree from the University of California, Berkeley.

In 2002, he began working at Stanford University.

I live in Los Altos Hills, California at the moment. In 2014 he married Carol E. Reiley and in February 2019 they had their first child, Nova. AI power couple was named to them by MIT Tech Review.

Ng is professor at the Department of Computer Science and Electrical Engineering of Stanford University. He was appointed director of the Artificial Intelligence Lab in Stanford, where he taught students and researched data and machine learning. His deep study course at Stanford is one of the most popular on campus with over 1,000 students enrolled. From 2011 to 2012 he worked on Google, where he founded Google Brain Deep Learning Project Director. After more than 100,000 students registered for Ng’s popular class, he was founded and CEO of Coursera in 2012. Several million people took the online course today. In 2014, he joined Baidu as chief scientist and conducted Big Data and A.I research. He announced his resignation from Baidu in March 2017. Soon thereafter, he launched Deeplearning.ai, an online classes curriculum. Ng then started Landing.ai, which brought AI to production factories. The first public partnership with FoxConn is Landing.ai. Ng spoke at the AI Frontiers Conference in November 2017.

Ng unveiled the AI Fund in January 2018 and raised $175 million to invest in new startups. He is also the President of Woebot and on the drive.ai board. He also wrote the book “Machine Learning Years,” which he distributed free of charge for people interested in machine learning. It was followed in December 2018 by an AI Transformation Playbook.

Ng is mainly engineering and profound learning and is one of the world’s most renowned informational scientists. He was involved in his early work in the Stanford Autonomous Helicopter project that developed one of the world’s most capable self-sufficient helicopters and in the STAIR project leading to ROS, an open-source robotic software platform.

In 2011, Ng founded Google’s Google Brain project, which developed artificial neural networks across large-scale Google computer infrastructure. Among its significant results was the use of a neural network with deep learning algorithms on 16,000 CPU cores which, after viewing only YouTube videos, learned to recognize cats without being told what a ‘cat’ is. The technology is currently used in the speech-recognition system of the Android Operating System. He co-authored the influential paper which introduced Latent Dirichlet allocation with David M. Blei and Michael I. Jordan.

Ng launched the Stanford Engineering Everywhere program in which several Stanford courses were placed online free of charge in 2008. In addition to student materials in Stanford CS229 class, Ng taught one of these courses, Machine Learning, which consisted of video lectures by him.

The “Applied” version of the Stanford class was hosted at ml-class.org and began with over 100,000 students in October 2011, including quizes and programming tasks, and became one of Stanford professors’ premier and successful MOOCs. His work later led to Coursera’s foundation in 2012. His courses are held on the top two most popular courses on the platform: Machine Learning, Neural Networks and Deep Learning. Ng have announced a new ‘AI for Everyone’ course to be offered in Coursera in early 2019 in order to help people understand the impact of AI on society. This is a non-technical course by examining the advantages and limits of AI for your company and its social impacts.

At least a quarter of the warming that the Earth is experiencing today i...
Hao Sheng, et al. ∙

The use of smartphones to take photographs of chest x-rays represents an...
Pranav Rajpurkar, et al. ∙

Evaluating the Disentanglement of Deep Generative Models through Manifold Topology

Although there have been several recent advances in the application of d...
Pranav Rajpurkar, et al. ∙

Climate change is one of the greatest challenges facing humanity, and we...
David Rolnick, et al. ∙

We develop an algorithm that can detect pneumonia from chest X-rays at a...
Pranav Rajpurkar, et al. ∙

We develop an algorithm which exceeds the performance of board certified...
Pranav Rajpurkar, et al. ∙

An Empirical Evaluation of Deep Learning on Highway Driving

Assignment methods are at the heart of many algorithms for unsupervised ...
Michael Kearns, et al. ∙

PEGASUS: A Policy Search Method for Large MDPs and POMDPs

We propose a new approach to the problem of searching a space of policie...
Andrew Y. Ng, et al. ∙

This work introduces a model that can recognize objects in images even i...
Richard Socher, et al. ∙