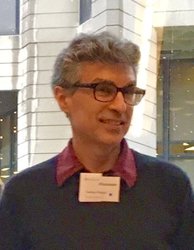 The Canadian computer scientist Yoshua Bengio is renowned for his work in deep neural networks and profound learning. He received the 2018 ACM A.M. Turing Award for his deep learning work. He is a professor at the University of Montreal’s Department of Computer and Operational Research and scientific director of the Montreal Institute for Algorithm Learning.

Bengio was awarded his Bachelor of Engineering from McGill University, Master of Science and PhD. He worked for MIT and AT&T Bell Labs as a post-doctoral fellow. Since 1993 Bengio has been a faculty member at the University of Montreal; he leads the MILA project, and is co-head of the Canadian Institute for Advanced Research’s Learning for the Machines & Brains project. Along with Geoffrey Hinton and Yann LeCun, Cade Metz is one of the three people responsible for the promotion of profound education in the 1990s and 2000s. While the other two went respectively to work for Google and Facebook, Bengio remained in the academy. According to MILA, Bengio is one of the computer scientists with an h-index of at least 100 with the most recent quotes daily. Bengio co-founded Element AI in October 2016, a Montreal based artificial intelligence incubator that turns AI research into real-world business applications. Bengio announced in May 2017 that he joins Botler AI, a Montreal-based legal tech company, as a strategic consultant. Bengio currently works for Recursion Pharmaceuticals as scientific and technical advisor.

Bengio was appointed an Officer of the Order of Canada in 2017. He was nominated for the Royal Society of Canada Fellow in the same year and was awarded the Quebec Marie-Victorin Prize.

Bengio won the 2018 Turing Award together with Geoffrey Hinton and Yann LeCun.

Lookback for Learning to Branch

On the Generalization and Adaption Performance of Causal Models

Is a Modular Architecture Enough?

Coordinating Policies Among Multiple Agents via an Intelligent Communication Channel

Temporal Abstractions-Augmented Temporally Contrastive Learning: An Alternative to the Laplacian in RL

In reinforcement learning, the graph Laplacian has proved to be a valuab...
Akram Erraqabi, et al. ∙

In Bayesian structure learning, we are interested in inferring a distrib...
Tristan Deleu, et al. ∙

We present a learning mechanism for reinforcement learning of closely re...
Ramnath Kumar, et al. ∙

The Effect of Diversity in Meta-Learning

Generative Flow Networks (GFlowNets) have been introduced as a method to...
Yoshua Bengio, et al. ∙

Properties from Mechanisms: An Equivariance Perspective on Identifiable Representation Learning

From Machine Learning to Robotics: Challenges and Opportunities for Embodied Intelligence

Unifying Likelihood-free Inference with Black-box Sequence Design and Beyond

One of the central elements of any causal inference is an object called ...
Kevin Xia, et al. ∙

The invariance principle from causality is at the heart of notable appro...
Kartik Ahuja, et al. ∙

SpeechBrain is an open-source and all-in-one speech toolkit. It is desig...
Mirco Ravanelli, et al. ∙

This paper is about the problem of learning a stochastic policy for gene...
Emmanuel Bengio, et al. ∙

Subtle and overt racism is still present both in physical and online com...
Olawale Onabola, et al. ∙

Coordination Among Neural Modules Through a Shared Global Workspace

Deep learning has seen a movement away from representing examples with a...
Anirudh Goyal, et al. ∙