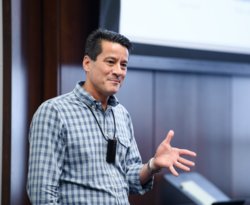 He has been the founding Director of the Penn’s Singh Network & Social Systems Engineering Program, the founding director of the Warren Center for Networking and Data Science, and also has secondary appointments to the Penn’s Wharton School and the Development Department. He is a leading researcher in theory of computer learning and the theory of algorithms and is interested in machine learning, artificial intelligence, computer finance, algorithmic commerce, computer science and social networks. He leads the consultation and research role in the team of the Artificial Intelligence Center of Excellence in Morgan Stanley.

Kearns is a native of the academic family, where David R Kearns is an Emeritus Professor at the California University, San Diego in chemistry, winner of the Guggenheim Fellowship in 1969, and his uncle Thomas R. Kearns is an Emeritus Professor at Amherst College of Philosophy and Law. His father’s grandfather Clyde W. Kearns pioneered insecticide toxicology, was a professor at the University of Illinois in the Entomology Campuses in Urbana and his mother’s grandparent Chen Shou-Yi was a Professor of history and literature at Pomona College. Claremont Colleges and Professor Chen are a leader in the development of Asian studies on the West Coast. Kearns got his B.S. Graduate in mathematics and computer science at the University of California, Berkeley, and Ph.D. in computer science from Harvard University in 1989. His PhD thesis was The Computational Complexity of Machine Learning, later published in 1990 by the MIT press in the ACM PhD Awards. Before joining AT&T Bell Labs in 1991, he continued his postdoctoral studies with Ronald Rivest at the MIT Computer Science Laboratory and Richard M. Karp at the International Computer Science Institute in UC Berkeley, both Turing Prize winners.

Kearns is a full-time professor and chairman at the University of Pennsylvania, where he is appointed to the Department of Computer and Information Sciences and the Wharton School of Statistics, Operations and Information Management. He has been with AT&T Labs and Bell Labs a decade before joining Penn Faculty in 2002, including Michael L. Littman, David A. McAllester and Sutton, Head of the AI Departments and Machine Learning, Secure Systems Research and Michael Collins and Fernando Pereira. Other algorithms and theoretical computer science collaborators at AT&T Labs included Yoav Freund, Ronald Graham, Mehryar Mohri, Robert Schapire, and Peter Shor, along with Sebastian Seung, Yann LeCun, Corinna Cortes, and Vladimir Vapnik.

Kearns was nominated Fellow of the Computer Machinery Association for machine-learning contributions and a fellow of the American Academy of Arts and Sciences.

Ryan W. Porter and John Langford were his former graduates and postdoctoral visitors.

Media such as the MIT Technology Review Can a Web site help you decide to have a child have reported Kearns’ work?, Bloomberg News Schneiderman High-Speed Trading pressures and NPR audio online education is growing up, for now it is free. It’s free.

Kearns and Umesh Vazirani published a text on computational learning theory since it was published in 1994, as a standard text.

Kearns and Valiant asked the question ‘is weak learning equivalent to strong learning?’ This is why machine learning algorithms, which were answered positively by Robert Schapire and Yoav Freund and then develop the practical AdaBoost, a adaptive boost that won the prestigious Gödel Prize.

Beyond the Frontier: Fairness Without Accuracy Loss

We study the problem of training a model that must obey demographic fair...
Emily Diana, et al. ∙

We consider a recently introduced framework in which fairness is measure...
Emily Diana, et al. ∙

We study a game between two firms in which each provide a service based ...
Jinshuo Dong, et al. ∙

Settings such as lending and policing can be modeled by a centralized ag...
Hadi Elzayn, et al. ∙

An Empirical Study of Rich Subgroup Fairness for Machine Learning

The most prevalent notions of fairness in machine learning are statistic...
Michael Kearns, et al. ∙

A Convex Framework for Fair Regression

We introduce a flexible family of fairness regularizers for (linear and ...
Richard Berk, et al. ∙

Fairness in Criminal Justice Risk Assessments: The State of the Art

Assignment methods are at the heart of many algorithms for unsupervised ...
Michael Kearns, et al. ∙

In the literature on graphical models, there has been increased attentio...
Michael Kearns, et al. ∙

We introduce a general representation of large-population games in which...
Michael Kearns, et al. ∙