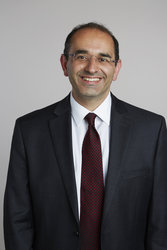 Zoubin Ghahramani FRS is a British-Iranian researcher at Cambridge University and Professor of Information Engineering. He is jointly appointed to University College London as well as to the Alan Turing Institute. And since 2009, he has been a fellow of St John’s College, Cambridge. From 2003 to 2012, he was Associate Professor of Research at the Carnegie Mellon School of Computing Science. He is also the Chief Scientist of Uber and the Vice Director of the Leverhulme Centre.

Ghahramani received a degree in cognitive science and computer science from the American school of Madrid in Spain and the University of Pennsylvania in 1990. He obtained his PhD from Michael I. Jordan and Tomaso Poggio’s Department of Brain and Cognitive Science at the Massachusetts Institute of Technology.

After his PhD, Ghahramani moved to the University of Toronto in 1995, working with Geoffrey Hinton, where he was an ITRC Postdoctoral Fellow at the Artificial Intelligence Lab. He was a faculty member at the Gatsby Computational Neuroscience Unit at University College London from 1998 to 2005.

In the field of Bayesian machine learning, Ghahramani made significant contributions as well as in graphical models and computer science. His current research focuses on Bayesian non-parametric modeling and statistical machine learning. He has also been working on artificial intelligence, information collection, bioinformatics and statistics, which are the basis for the management of uncertainty, decision-making and the design of learning systems. He has publicated more than 200 documents, receiving over 30,000 quotes. In 2014, he and Gary Marcus, Doug Bemis and Ken Stanley co-founded the Geometric Intelligence Company. In 2016, he moved to Uber’s A.I. Labs after Uber had acquired the startup. He became Chief Scientist just after four months, replacing Gary Marcus.

Zoubin Ghahramani is a world leader in machine learning, which makes significant progress in algorithms that can learn from data. In particular, it is known for its fundamental contributions in probabilistic modeling and bayesian nonparametric approaches to machine learning systems and the development of approximate algorithms for scalable learning. He is a pioneer of SML methods, active learning algorithms and sparse Gaussian processes. His development of novel non-parametric dimensional models, such as the infinite latent model, was highly influential.

The performance of deep neural networks can be highly sensitive to the c...
Zi Wang, et al. ∙

Making sense of a dataset in an automatic and unsupervised fashion is a ...
Antonio Vergari, et al. ∙

In the modern age, rankings data is ubiquitous and it is useful for a va...
María Lomelí, et al. ∙

The Mirage of Action-Dependent Baselines in Reinforcement Learning

Variational Gaussian Dropout is not Bayesian

We consider the task of one-shot learning of visual categories. In this ...
Jordan Burgess, et al. ∙

Lost Relatives of the Gumbel Trick

The Gumbel trick is a method to sample from a discrete probability distr...
Matej Balog, et al. ∙

A study of the effect of JPG compression on adversarial images

A Theoretically Grounded Application of Dropout in Recurrent Neural Networks

Tree structures are ubiquitous in data across many domains, and many dat...
Hong Ge, et al. ∙

Drawing a sample from a discrete distribution is one of the building com...
Yutian Chen, et al. ∙

Dropout as a Bayesian Approximation: Appendix

We show that a neural network with arbitrary depth and non-linearities, ...
Yarin Gal, et al. ∙

We consider training a deep neural network to generate samples from an u...
Gintare Karolina Dziugaite, et al. ∙