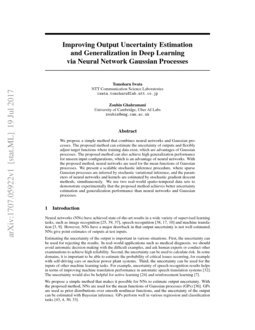 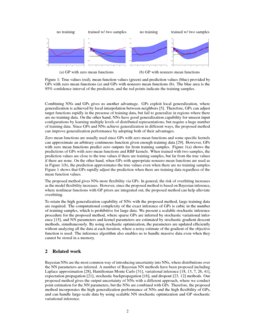 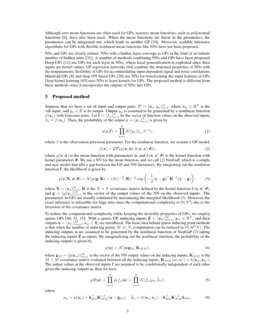 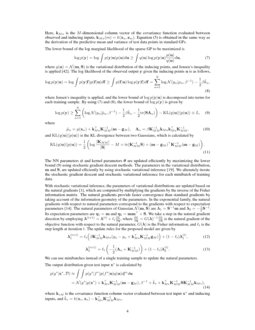 Neural networks (NNs) have achieved state-of-the-art results in a wide variety of supervised learning tasks, such as image recognition

. The uncertainty would also be helpful for active learning

We propose a simple method that makes it possible for NNs to estimate output uncertainty. With the proposed method, NNs are used for the mean functions of Gaussian processes (GPs) (Rasmussen and Williams, 2006)

. GPs are used as prior distributions over smooth nonlinear functions, and the uncertainty of the output can be estimated with Bayesian inference. GPs perform well in various regression and classification tasks

Combining NNs and GPs gives us another advantage. GPs exploit local generalization, where generalization is achieved by local interpolation between neighbors

To retain the high generalization capability of NNs with the proposed method, large training data are required. The computational complexity of the exact inference of GPs is cubic in the number of training samples, which is prohibitive for large data. We present a scalable stochastic inference procedure for the proposed method, where sparse GPs are inferred by stochastic variational inference (Hensman et al., 2013), and NN parameters and kernel parameters are estimated by stochastic gradient descent methods, simultaneously. By using stochastic optimization, the parameters are updated efficiently without analyzing all the data at each iteration, where a noisy estimate of the gradient of the objective function is used. The inference algorithm also enables us to handle massive data even when they cannot be stored in a memory.

The remainder of this paper is organized as follows. In Section 2, we outline related work. In Section 3, we propose a simple approach for combining NNs and GPs, and describe its scalable inference procedure. In Section 4, we demonstrate the effectiveness of the proposed method by using two real-world spatio-temporal data sets in terms of uncertainty estimate and point estimate performance. Finally, we present concluding remarks and a discussion of future work in Section 5.

(Hernández-Lobato and Adams, 2015), and dropout (Kingma et al., 2015; Gal and Ghahramani, 2016) methods. Our proposed method gives the output uncertainty of NNs with a different approach, where we conduct point estimation for the NN parameters, but the NNs are combined with GPs. Therefore, the proposed method incorporates the high generalization performance of NNs and the high flexibility of GPs, and can handle large-scale data by using scalable NN stochastic optimization and GP stochastic variational inference.

NNs and GPs are closely related. NNs with a hidden layer converge to GPs in the limit of an infinite number of hidden units (Neal, 1995). A number of methods combining NNs and GPs have been proposed. Deep GPs (Damianou and Lawrence, 2013) use GPs for each layer in NNs, where local generalization is exploited since their inputs are kernel values. GP regression networks (Wilson et al., 2012) combine the structural properties of NNs with the nonparametric flexibility of GPs for accommodating input dependent signal and noise correlations. Manifold GPs (Calandra et al., 2016) and deep NN based GPs (Huang et al., 2015) use NNs for transforming the input features of GPs. Deep kernel learning (Wilson et al., 2016) uses NNs to learn kernels for GPs. The proposed method is different from these methods since it incorporates the outputs of NNs into GPs.

Suppose that we have a set of input and output pairs, D=(xn,yn)Nn=1, where xn∈RD is the nth input, and yn∈R is its output. Output yn is assumed to be generated by a nonlinear function f(xn) with Gaussian noise. Let f=(fn)Nn=1

be the vector of function values on the observed inputs,

fn=f(xn). Then, the probability of the output y=(yn)Nn=1 is given by

where β is the observation precision parameter. For the nonlinear function, we assume a GP model,

where X=(xn)Nn=1, K is the N×N covariance matrix defined by the kernel function k(x,x′;θ), and g=(g(xn))Nn=1 is the vector of the output values of the NN on the observed inputs. The parameters in GPs are usually estimated by maximizing the marginal likelihood (3). However, the exact inference is infeasible for large data since the computational complexity is O(N3) due to the inversion of the covariance matrix.

To reduce the computational complexity while keeping the desirable properties of GPs, we employ sparse GPs (Snelson and Ghahramani, 2006; Quiñonero-Candela and Rasmussen, 2005; Hensman et al., 2013). With a sparse GP, inducing inputs Z=(zm)Mm=1, zm∈RD, and their outputs u=(um)Mm=1, um∈R, are introduced. The basic idea behind sparse inducing point methods is that when the number of inducing points M≪N, computation can be reduced in O(M2N). The inducing outputs u are assumed to be generated by the nonlinear function of NeuGaP (2) taking the inducing inputs Z as inputs. By marginalizing out the nonlinear function, the probability of the inducing outputs is given by

Here, kMn is the M-dimensional column vector of the covariance function evaluated between observed and inducing inputs, kMn(m)=k(xn,zm). Equation (5

) is obtained in the same way as the derivation of the predictive mean and variance of test data points in standard GPs.

and KL(q(u)||p(u)) is the KL divergence between two Gaussians, which is calculated by

We can use minibatches instead of a single training sample to update the natural parameters.

The output distribution given test input x∗ is calculated by

where k∗M is the covariance function column vector evaluated between test input x∗ and inducing inputs, and ~k∗=k(x∗,x∗)−k⊤M∗K−1MMkM∗.

, and 100 inducing points. We set the step size at epoch

t as ℓt=(t+1)−0.9 for the stochastic variational inference. With the NNs, we used three-layer feed-forward NNs with five hidden units, and we optimized the NN parameters ϕ and precision parameter β by maximizing the following likelihood, ∑Nn=1logN(yn|g(xn;ϕ),β−1), by using Adam (Kingma and Ba, 2014). The proposed method used NNs with the same structure for the mean function, where the NN parameters were first optimized by maximizing the likelihood, and then variational, kernel and NN parameters were estimated by maximizing the variational lower bound (9) using the stochastic variational inference and Adam. The locations of the inducing inputs were initialized by k-means results. For all the methods, we set the minibatch size at 64, and used early stoping based on the likelihood on a validation set.

Tables 1 and 2 show the test log likelihoods with different missing value rates with CC and USHCN data, respectively. The proposed method achieved the highest average likelihoods with both data sets. The NN performed poorly when many values were missing (Table 1, 80% missing). On the other hand, since a GP is a nonparametric Bayesian method, where the effective model complexity is automatically adjusted depending on the number of training samples, the GPs performed better than the NNs with the many missing value data. When the number of missing values was small (Table 1, 20% missing), the NN performed better than the GP. The proposed method achieved the best performance with different missing value rates by combining the advantages of NNs and GPs. Tables 3 and 4 show the test mean squared errors with different missing value rates. The proposed method achieved the lowest average errors with both data sets. This result indicates that combining NNs and GPs also helps to improve the generalization performance. Table 5 shows the computational time in seconds.