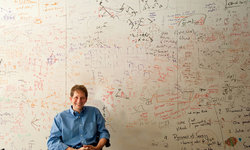 Joshua Brett Tenenbaum is a cognitive science and computing professor at the Institute of Technology in Massachusetts. He is famous for his contributions to mathematical psychology and cognitive bayesian science. Tenenbaum previously taught at Stanford University and from October 2010 to January 2011 he was a Wasow visiting fellow.

In California, Tenenbaum grew up. His mother is a teacher and his father is the internet pioneer Jay Martin Tenenbaum. His research guidelines were influenced strongly by his parents’ interest in teaching and learning and, later, by interaction with cognitive psychologist Roger Shepard, during his years at Yale. His work focuses on the analysis of probabilistic inferences as the engine of human knowledge and the development of machine learning.

The book Architects of Intelligence: The Truth About AI from the People Building it by American futurist Martin Ford, Tenenbaum contributed a chapter in 2018.

To facilitate the development of new models to bridge the gap between ma...
Tan Zhi-Xuan, et al. ∙

The ability to reason about changes in the environment is crucial for ro...
Jiahui Fu, et al. ∙

Drawing out of Distribution with Neuro-Symbolic Generative Models

Differentiable physics has recently been shown as a powerful tool for so...
Sizhe Li, et al. ∙

ComPhy: Compositional Physical Reasoning of Objects and Events from Videos

PTR: A Benchmark for Part-based Conceptual, Relational, and Physical Reasoning

The visual world around us can be described as a structured set of objec...
Nan Liu, et al. ∙

Much of what we do as humans is engage socially with other agents, a ski...
Ravi Tejwani, et al. ∙

OPEn: An Open-ended Physics Environment for Learning Without a Task

When inferring the goals that others are trying to achieve, people intui...
Arwa Alanqary, et al. ∙

Physion: Evaluating Physical Prediction from Vision in Humans and Machines

The Abstraction and Reasoning Corpus (ARC) is a set of tasks that tests ...
Samuel Acquaviva, et al. ∙

We study the problem of dynamic visual reasoning on raw videos. This is ...
Zhenfang Chen, et al. ∙