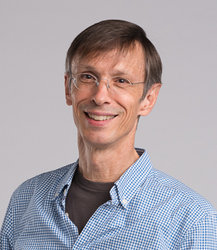 My research focuses on understanding humans and their behavior in video. I work at the boundary of computer vision, machine learning, and computer graphics.  I'm particularly interested in how people move and how this movement relates to their goals.

Michael Black received his B.Sc. from the University of British Columbia (1985), his M.S. from Stanford (1989), and his Ph.D. from Yale University (1992). He has held positions at the University of Toronto, Xerox PARC, and Brown Unviversity. He is one of the founding directors at the Max Planck Institute for Intelligent Systems in Tübingen, Germany, where he leads the Perceiving Systems department. He is a Distinguished Amazon Scholar, an Honorarprofessor at the University of Tuebingen, and Adjunct Professor at Brown University. His work has won several awards including the IEEE Computer Society Outstanding Paper Award (1991), Honorable Mention for the Marr Prize (1999 and 2005), the 2010 Koenderink Prize, and the 2013 Helmholtz Prize. He is a foreign member of the Royal Swedish Academy of Sciences. In 2013 he co-founded Body Labs Inc., which was acquired by Amazon in 2017.

We use our hands to interact with and to manipulate objects. Articulated...
Zicong Fan, et al. ∙

OSSO: Obtaining Skeletal Shape from Outside

We address the problem of inferring the anatomic skeleton of a person, i...
Marilyn Keller, et al. ∙

Our goal is to recover the 3D shape and pose of dogs from a single image...
Nadine Rueegg, et al. ∙

LocATe: End-to-end Localization of Actions in 3D with Transformers

Understanding a person's behavior from their 3D motion is a fundamental ...
Jiankai Sun, et al. ∙

Humans are in constant contact with the world as they move through it an...
Hongwei Yi, et al. ∙

To make 3D human avatars widely available, we must be able to generate a...
Xu Chen, et al. ∙

Embodied Hands: Modeling and Capturing Hands and Bodies Together

Putting People in their Place: Monocular Regression of 3D People in Depth

Given an image with multiple people, our goal is to directly regress the...
Yu Sun, et al. ∙

Synthesizing images of a person in novel poses from a single image is a ...
Soubhik Sanyal, et al. ∙

SPEC: Seeing People in the Wild with an Estimated Camera

Due to the lack of camera parameter information for in-the-wild images, ...
Muhammed Kocabas, et al. ∙

The Power of Points for Modeling Humans in Clothing

In natural conversation and interaction, our hands often overlap or are ...
Zicong Fan, et al. ∙

In this paper we present our preliminary work on model-based behavioral ...
Ci Li, et al. ∙

Understanding the semantics of human movement – the what, how and why of...
Abhinanda R. Punnakkal, et al. ∙

Learning to model and reconstruct humans in clothing is challenging due ...
Qianli Ma, et al. ∙

We tackle the problem of action-conditioned generation of realistic and ...
Mathis Petrovich, et al. ∙

On Self-Contact and Human Pose

Simulation and Control of Deformable Autonomous Airships in Turbulent Wind

Humans live within a 3D space and constantly interact with it to perform...
Mohamed Hassan, et al. ∙

We are More than Our Joints: Predicting how 3D Bodies Move

GRAB: A Dataset of Whole-Body Human Grasping of Objects

The SMPL body model is widely used for the estimation, synthesis, and an...
Ahmed A. A. Osman, et al. ∙

The goal of many computer vision systems is to transform image pixels in...
Nadine Rueegg, et al. ∙