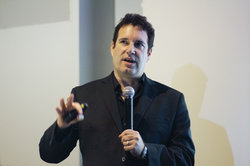 Hod Lipson is an American engineer for robotics. He is the director of the Creative Machines Lab at Columbia University. The work of Lipson focuses on the evolutionary robotics, design automation, rapid prototyping, man-made life and machinery that can demonstrate certain aspects of human creativity. His publications were cited almost 10,000 times, and by 8 November 2015, he had an h-index of 50. Do you trust this computer in Lipson’s 2018 documentary on artificial intelligence?

Lipson was involved in machine learning and presented his robot “self-aware” at the 2007 TED conference. In 2009, he and his graduate student Michael Schmidt of Cornell University developed software called “Eureqa,” which derived equations, mathematical relations and laws in nature from data sets: for example, Newton’s second law of motion was taken from a set of data. In 2011, it has been reported that Eureqa has achieved a much more complex task: to rederive seven equations that describe the fluctuations in the level of different chemical compounds in oxygen-reducing yeast cells.

Self replicating robots — simple structures that can reproduce with the right parts.

A Massively-Parallel 3D Simulator for Soft and Hybrid Robots

A trend has emerged over the past decades pointing to the harnessing of ...
Zechen Xiong, et al. ∙

In this work we aim to mimic the human ability to acquire the intuition ...
Philippe M. Wyder, et al. ∙

While most robotics simulation libraries are built for low-dimensional a...
Jacob Austin, et al. ∙

We train embodied agents to play Visual Hide and Seek where a prey must ...
Boyuan Chen, et al. ∙

In this work we present a method for leveraging data from one source to ...
Robert Kwiatkowski, et al. ∙

In this paper, we demonstrate the ability to discriminate between cultiv...
Delia Bullock, et al. ∙

In this paper, we demonstrate the ability to discriminate between cultiv...
Delia Bullock, et al. ∙

We show that it is possible to reduce a high-dimensional object like a n...
Oscar Chang, et al. ∙

Self-replication is a key aspect of biological life that has been largel...
Oscar Chang, et al. ∙

The Surprising Creativity of Digital Evolution: A Collection of Anecdotes from the Evolutionary Computation and Artificial Life Research Communities

Scalable Co-Optimization of Morphology and Control in Embodied Machines

How transferable are features in deep neural networks?

The evolutionary origins of modularity

A central biological question is how natural organisms are so evolvable ...
Jeff Clune, et al. ∙

We propose a new approach for constructing a 3D representation from a 2D...
Kyle Johnson, et al. ∙