Training modern deep learning models requires large amounts of computation, often provided by GPUs. Scaling computation from one GPU to many can enable much faster training and research progress but entails two complications. First, the training library must support inter-GPU communication. Depending on the particular methods employed, this communication may entail anywhere from negligible to significant overhead. Second, the user must modify his or her training code to take advantage of inter-GPU communication. Depending on the training library's API, the modification required may be either significant or minimal. Existing methods for enabling multi-GPU training under the TensorFlow library entail non-negligible communication overhead and require users to heavily modify their model-building code, leading many researchers to avoid the whole mess and stick with slower single-GPU training. In this paper we introduce Horovod, an open source library that improves on both obstructions to scaling: it employs efficient inter-GPU communication via ring reduction and requires only a few lines of modification to user code, enabling faster, easier distributed training in TensorFlow. Horovod is available under the Apache 2.0 license at https://github.com/uber/horovod. 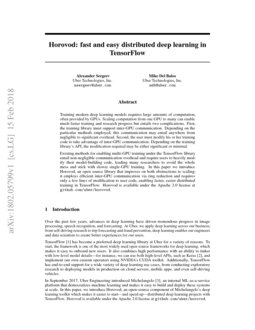 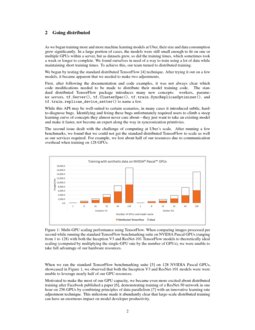 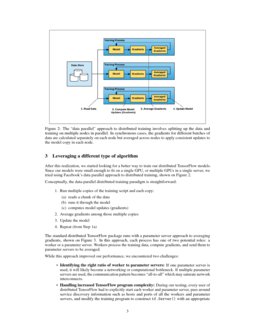 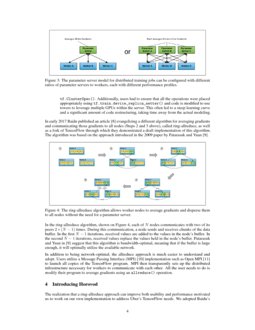 AdaNet: A Scalable and Flexible Framework for Automatically Learning Ensembles

Bringing UMAP Closer to the Speed of Light with GPU Acceleration

Over the past few years, advances in deep learning have driven tremendous progress in image processing, speech recognition, and forecasting. At Uber, we apply deep learning across our business; from self-driving research to trip forecasting and fraud prevention, deep learning enables our engineers and data scientists to create better experiences for our users.

has become a preferred deep learning library at Uber for a variety of reasons. To start, the framework is one of the most widely used open source frameworks for deep learning, which makes it easy to onboard new users. It also combines high performance with an ability to tinker with low-level model details—for instance, we can use both high-level APIs, such as Keras

Chollet et al. (2015), and implement our own custom operators using NVIDIA’s CUDA toolkit. Additionally, TensorFlow has end-to-end support for a wide variety of deep learning use cases, from conducting exploratory research to deploying models in production on cloud servers, mobile apps, and even self-driving vehicles.

, an internal ML-as-a-service platform that democratizes machine learning and makes it easy to build and deploy these systems at scale. In this paper, we introduce Horovod, an open-source component of Michelangelo’s deep learning toolkit which makes it easier to start—and speed up—distributed deep learning projects with TensorFlow. Horovod is available under the Apache 2.0 license at

As we began training more and more machine learning models at Uber, their size and data consumption grew significantly. In a large portion of cases, the models were still small enough to fit on one or multiple GPUs within a server, but as datasets grew, so did the training times, which sometimes took a week or longer to complete. We found ourselves in need of a way to train using a lot of data while maintaining short training times. To achieve this, our team turned to distributed training.

We began by testing the standard distributed TensorFlow Abadi et al. (2016b) technique. After trying it out on a few models, it became apparent that we needed to make two adjustments.

First, after following the documentation and code examples, it was not always clear which code modifications needed to be made to distribute their model training code. The standard distributed TensorFlow package introduces many new concepts: workers, parameter servers, tf.Server(), tf.ClusterSpec(), tf.train.SyncReplicasOptimizer(), and tf.train.replicas_device_setter() to name a few.

While this API may be well-suited to certain scenarios, in many cases it introduced subtle, hard-to-diagnose bugs. Identifying and fixing these bugs unfortunately required users to climb a steep learning curve of concepts they almost never care about—they just want to take an existing model and make it faster, not become an expert along the way in syncronization primtivies.

The second issue dealt with the challenge of computing at Uber’s scale. After running a few benchmarks, we found that we could not get the standard distributed TensorFlow to scale as well as our services required. For example, we lost about half of our resources due to communication overhead when training on 128 GPUs.

When we ran the standard TensorFlow benchmarking suite Authors (2017a) on 128 NVIDIA Pascal GPUs, showcased in Figure 1, we observed that both the Inception V3 and ResNet-101 models were were unable to leverage nearly half of our GPU resources.

Motivated to make the most of our GPU capacity, we became even more excited about distributed training after Facebook published a paper Goyal et al. (2017), demonstrating training of a ResNet-50 network in one hour on 256 GPUs by combining principles of data parallelism Wikipedia (2017a) with an innovative learning rate adjustment technique. This milestone made it abundantly clear that large-scale distributed training can have an enormous impact on model developer productivity.

3 Leveraging a different type of algorithm

After this realization, we started looking for a better way to train our distributed TensorFlow models. Since our models were small enough to fit on a single GPU, or multiple GPUs in a single server, we tried using Facebook’s data parallel approach to distributed training, shown on Figure 2.

While this approach improved our performance, we encountered two challenges:

In early 2017 Baidu published an article Gibiansky (2017) evangelizing a different algorithm for averaging gradients and communicating those gradients to all nodes (Steps 2 and 3 above), called ring-allreduce, as well as a fork of TensorFlow through which they demonstrated a draft implementation of this algorithm. The algorithm was based on the approach introduced in the 2009 paper by Patarasuk and Yuan Patarasuk and Yuan (2009).

In the ring-allreduce algorithm, shown on Figure 4, each of N nodes communicates with two of its peers 2∗(N−1) times. During this communication, a node sends and receives chunks of the data buffer. In the first N−1 iterations, received values are added to the values in the node’s buffer. In the second N−1 iterations, received values replace the values held in the node’s buffer. Patarasuk and Yuan in Patarasuk and Yuan (2009) suggest that this algorithm is bandwidth-optimal, meaning that if the buffer is large enough, it will optimally utilize the available network.

In addition to being network-optimal, the allreduce approach is much easier to understand and adopt. Users utilize a Message Passing Interface (MPI) Forum (2017) implementation such as Open MPI Gabriel et al. (2004) to launch all copies of the TensorFlow program. MPI then transparently sets up the distributed infrastructure necessary for workers to communicate with each other. All the user needs to do is modify their program to average gradients using an allreduce() operation.

Next, we discuss how you can use Horovod for your team’s machine learning use cases, too!

5 Distributing your training job with Horovod

# Add hook to broadcast variables from rank 0 to all other processes # during initialization. hooks = [hvd.BroadcastGlobalVariablesHook(0)]

# The MonitoredTrainingSession takes care of session initialization, # restoring from a checkpoint, saving to a checkpoint, and closing # when done or an error occurs. with tf.train.MonitoredTrainingSession(checkpoint_dir="/tmp/train_logs", config=config, hooks=hooks) as mon_sess: while not mon_sess.should_stop(): # Perform synchronous training. mon_sess.run(train_op) Example TensorFlow program distributed using Horovod.

As this example shows, there are only a few changes necessary to make single-GPU programs distributed:

User can then run several copies of the program across multiple servers using the mpirun command:

The mpirun command distributes train.py to four nodes and runs it on four GPUs per node.

Horovod can also distribute Keras programs by following the same steps. (You can find examples of scripts for both TensorFlow and Keras on the Horovod GitHub page Sergeev et al. (2017).)

Horovod’s ease of use, debugging efficiency, and speed makes it a highly effective sidekick for engineers and data scientists interested in distributing a single-GPU or single-server program. Next, we introduce Horovod Timeline, a means of providing a high level of understanding of the states of worker nodes during a distributed training job.

As we onboarded users to Horovod, we realized that we needed a way for them to easily identify bugs in their code, an issue commonly faced when dealing with complex distributed systems. In particular, it was difficult to use native TensorFlow timelines or the CUDA Profiler because users are required to collect and cross-reference profiles from the various servers.

With Horovod, we wanted to created a way to provide a high-level understanding of operation timelines across nodes. To do so, we built Horovod Timeline, a Horovod-focused profiling tool compatible with Chrome’s about:tracing Authors (2017c) trace event profiling viewer. Users can use Horovod Timelines to view exactly what each node was doing at each time step throughout a training job. This helps identify bugs and debug performance issues. Users can enable timelines by setting a single environment variable and can view the profiling results in the browser through chrome://tracing. Figure 5 shows an example of Horovod Timeline.

After we analyzed the timelines of a few models, we noticed that those with a large amount of tensors, such as ResNet-101, tended to have many tiny

allreduce operations. As noted earlier, ring-allreduce utilizes the network in an optimal way if the tensors are large enough, but does not work as efficiently or quickly if they are very small. We asked ourselves: what if multiple tiny tensors could be fused together before performing ring-allreduce on them?

Our answer: Tensor Fusion, an algorithm that fuses tensors together before we call Horovod’s ring-allreduce. As we experimented with this approach, we observed up to 65 percent improvement in performance on models with a large number of layers running on an unoptimized transmission control protocol (TCP) network. We outline how to use Tensor Fusion, below:

With Horovod, Tensor Fusion, and other features built on top of Michelangelo, we can increase the efficiency, speed, and ease-of-use across our machine learning systems. In our next section, we share real world benchmarks that showcase Horovod’s performance.

We re-ran the official TensorFlow benchmarks modified to use Horovod Sergeev (2017) and compared the performance with regular distributed TensorFlow. As depicted in Figure 6, we observed large improvements in our ability to scale; we were no longer wasting half of the GPU resources—in fact, scaling using both Inception V3 and ResNet-101 models achieved an 88 percent efficiency mark. In other words, the training was about twice as fast as standard distributed TensorFlow.

For the Inception V3 and ResNet-101 models, we found that RDMA did not significantly improve our performance and only achieved a three to four percent increase over TCP networking. RDMA, however, did help Horovod exceed 90 percent scaling efficiency on both models.

Meanwhile, the VGG-16 model experienced a significant 30 percent speedup when we leveraged RDMA networking. This can be explained by VGG-16’s high number of model parameters, caused by the use of fully connected layers combined with its small number of layers. These characteristics shifted the critical path from GPU computation to communication and created a networking bottleneck.

These benchmarks demonstrate that Horovod scales well on both plain TCP and RDMA-capable networks, although users with RDMA networking will be able to squeeze out optimal performance and experience a significant efficiency gain when using models with a high number of model parameters, such as the VGG-16.

With Horovod, we have only scratched the surface when it comes to exploring performance optimizations in deep learning; in the future, we intend to continue leveraging the open source community to extract additional performance gains with our machine learning systems and frameworks.

There are a few areas that we are actively working on to improve Horovod, including:

We hope the simplicity of Horovod enables others to adopt distributed training and better leverage their compute resources for deep learning. We welcome feedback and contributions: please report any issues you encounter, share speed-ups, and send pull requests.

The authors would like to thank Molly Vorwerck and Jason Yosinski for the help in preparing this paper.