We describe Honk, an open-source PyTorch reimplementation of convolutional neural networks for keyword spotting that are included as examples in TensorFlow. These models are useful for recognizing "command triggers" in speech-based interfaces (e.g., "Hey Siri"), which serve as explicit cues for audio recordings of utterances that are sent to the cloud for full speech recognition. Evaluation on Google's recently released Speech Commands Dataset shows that our reimplementation is comparable in accuracy and provides a starting point for future work on the keyword spotting task. 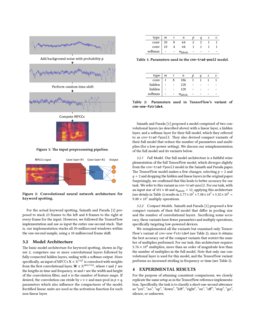 Conversational agents that offer speech-based interfaces are increasingly part of our daily lives, both embodied in mobile phones as well as standalone consumer devices for the home. Prominent examples include Google’s Assistant, Apple’s Siri, Amazon’s Alexa, and Microsoft’s Cortana. Due to model complexity and computational requirements, full speech recognition is typically performed in the cloud: recorded audio is transferred to a datacenter for processing. For both practical and privacy concerns, devices do not continuously stream user speech into the cloud, but rely on a command trigger, e.g., “Hey Siri”, that provides an explicit cue signaling input directed at the device. These verbal triggers also serve as an acknowledgment that subsequent audio recordings of user utterances will be sent to backend servers and thus may be logged and analyzed. A recent incident where user privacy expectations have not been met involves the Google Home Mini smart speaker, when a reviewer discovered that the device was surreptitiously recording his conversations without his knowledge or consent (Weinberger, 2017). This incident demonstrates the importance of on-device command triggering, which requires accurate, low-powered keyword spotting capabilities.

Sainath and Parada (Sainath and Parada, 2015) proposed simple convolutional neural network models for keyword spotting and reference implementations are provided in TensorFlow. These models, coupled with the release of Google’s Speech Commands Dataset (Warden, 2017), provide a public benchmark for the keyword spotting task. This paper describes Honk, a PyTorch reimplementation of these models. We are able to achieve recognition accuracy comparable to the TensorFlow reference implementations.

announced the release of the Speech Commands Dataset, along with training and inference code for convolutional neural networks for keyword spotting. The dataset, released under a Creative Commons license, contains 65,000 one-second long utterances of 30 short words by thousands of different people. Additionally, the dataset contains such background noise samples as pink noise, white noise, and human-made sounds. Quite explicitly, the blog writes:

The dataset is designed to let you build basic but useful voice interfaces for applications, with common words like “Yes”, “No”, digits, and directions included.

As such, this resource provides a nice benchmark for the keyword spotting task that we are interested in.

Following Google’s demo, our task is to discriminate among 10 of the 30 short words, treating the rest of the 20 unused classes as a single “unknown” group of words. There is also one silence class comprised of soft background noise to avoid misclassifying silence. Therefore, in total, there are 12 output labels: ten keywords, one unknown class, and one silence class.

Honk, named after local fauna, is an open-source PyTorch reimplementation of public TensorFlow keyword spotting models,111https://github.com/tensorflow/tensorflow/tree/master/tensorflow/examples/speech_commands which are in turn based on the work of Sainath and Parada (Sainath and Parada, 2015). In some cases, as we note below, details differ between the two. We embarked on a PyTorch reimplementation primarily to maintain consistency with the rest of our research group’s projects. However, we feel that PyTorch has an advantage over TensorFlow in terms of readability of the model specifications.

Following the TensorFlow reference, our implementation consists of two distinct components: an input preprocessor and the convolutional neural network models themselves. All our code is available on GitHub222https://github.com/castorini/honk for others to build upon.

). To augment the dataset and to increase robustness, background noise consisting of white noise, pink noise, and human-made noise are mixed in with some of the input audio, and the sample is randomly time-shifted. For feature extraction, a band-pass filter of 20Hz/4kHz is first applied to reduce the effect of unimportant sounds. Forty-dimensional Mel-Frequency Cepstrum Coefficient (MFCC) frames are then constructed and stacked using a 30-millisecond window size and a 10-millisecond frame shift.

For the actual keyword spotting, Sainath and Parada (Sainath and Parada, 2015) proposed to stack 23 frames to the left and 8 frames to the right at every frame for the input. However, we followed the TensorFlow implementation and use as input the entire one-second stack. That is, our implementation stacks all 30-millisecond windows within the one-second sample, using a 10-millisecond frame shift.

The basic model architecture for keyword spotting, shown in Figure 2, comprises one or more convolutional layers followed by fully-connected hidden layers, ending with a softmax output. More specifically, an input of MFCCs X∈Rt×f is convolved with weights from the first convolutional layer, W∈Rm×r×n, where t and f are the lengths in time and frequency, m and r are the width and height of the convolution filter, and n

is the number of feature maps. If desired, the convolution can stride by

, parameters which also influence the compactness of the model. Rectified linear units are used as the activation function for each non-linear layer.

proposed a model comprised of two convolutional layers (as described above) with a linear layer, a hidden layer, and a softmax layer for their full model, which they referred to as

cnn-trad-fpool3. They also devised compact variants of their full model that reduce the number of parameters and multiplies (for a low-power setting). We discuss our reimplementation of the full model and its variants below.

Our full model architecture is a faithful reimplementation of the full TensorFlow model, which diverges slightly from the cnn-trad-fpool3 model in the Sainath and Parada paper. The TensorFlow model makes a few changes, selecting p=2 and q=2 and dropping the hidden and linear layers in the original paper. Surprisingly, we confirmed that this leads to better accuracy for our task. We refer to this variant as cnn-trad-pool2. For our task, with an input size of 101×40 and nlabels=12, applying this architecture (see details in Table 1) results in 2.77×107+7.08×107+3.32×105=9.88×107 multiply operations.

Sainath and Parada (Sainath and Parada, 2015) proposed a few compact variants of their full model that differ in pooling size and the number of convolutional layers. Sacrificing some accuracy, these variants have fewer parameters and multiply operations, specifically targeting low-powered devices.

We reimplemented all the variants but examined only TensorFlow’s variant of cnn-one-fstride4 (see Table 2), since it obtains the best accuracy out of the compact variants that restrict the number of multiplies performed. For our task, this architecture requires 5.76×106 multiplies, more than an order of magnitude less than the number of multiplies in the full model. Note that only one convolutional layer is used for this model, and the TensorFlow variant performs no increased striding in frequency or time (see Table 2).

For the purpose of attaining consistent comparisons, we closely replicate the same setup as in the TensorFlow reference implementation. Specifically, the task is to classify a short one-second utterance as “yes”, “no”, “up”, “down”, “left”, “right”, “on”, “off”, “stop”, “go”, silence, or unknown.

Following the TensorFlow implementation, we initialized all biases to zero and all weights to samples from a truncated normal distribution with

. We used stochastic gradient descent with a mini-batch size of 100, learning rates of 0.001 and 0.01 for the full and compact models, respectively. We also ran our entire training/validation/test process using five different random seeds, obtaining a distribution of the model accuracy. For the full model, approximately 30 epochs were required for convergence, while roughly 55 epochs were needed for the compact model.

Deviating from the TensorFlow implementation, we also tried training our models using stochastic gradient descent with a momentum of 0.9. The compact model had failed to converge with a learning rate of 0.01, so the rate was decreased to 0.001. As shown in Table 3, we find that training with momentum yields improved results, especially for the full model.

The Speech Commands Dataset was split into training, validation, and test sets, with 80% in training, 10% in validation, and 10% in test. This results in roughly 22,000 examples for training and 2,700 each for validation and testing. Mirroring the TensorFlow implementation, for consistency across runs, the hashed name of the audio file from the dataset determines which split the sample belongs to. Specifically, the integer value of the SHA1 hash of the filename is used to place each example into either the training, validation, or test sets.

To generate training data via the process described in Section 3.1

, Honk adds background noise to each sample with a probability of

0.8 at every epoch, where the noise is chosen randomly from the background noises provided in the Speech Commands Dataset. Our implementation also performs a random time-shift of Y milliseconds before transforming the audio into MFCCs, where Y∼\textscUniform[−100,100]. In order to accelerate the training process, all preprocessed inputs are cached for reuse across different training epochs. At each epoch, 30% of the cache is evicted.

We trained all our models using a workstation built from commodity hardware: dual GeForce GTX 1080 graphics cards, an i7-6800K CPU, and 64 GB of RAM. This machine was more than sufficient to train the models in this paper, all of which required less than 2 GB of GPU memory.

Our evaluation metric is accuracy, simply computed as the percentage of correct forced choice predictions out of the examples in the test set. Results are shown in Table

3, where we compare the PyTorch and TensorFlow implementations of the full and compact models. The reported accuracy is the mean across all individual runs, accompanied by the 95% confidence interval. We find that the accuracies of the different implementations are comparable, and the confidence intervals overlap. This suggests that we have faithfully reproduced the TensorFlow models.

Beyond the implementation of the convolutional neural network models themselves in our GitHub repository,333https://github.com/castorini/honk our codebase includes a number of additional features:

These features allow anyone to replicate the experiments described in this paper, and provide a platform that others can build on for the keyword spotting task.

In this paper, we describe how two convolutional neural network models from Sainath and Parada (Sainath and Parada, 2015) are implemented in practice with TensorFlow, and we demonstrate that Honk is a faithful PyTorch reimplementation of these models. As evaluated with the Google Speech Commands Dataset, we find that the accuracies of the implementations are comparable.

We would like to thank Zhucheng Tu for diligently reviewing Honk’s source code.