The recent progress on capsule networks by Hinton et al. has generated considerable excitement in the machine learning community. The idea behind a capsule is inspired by a cortical minicolumn in the brain, whereby a vertically organised group of around 100 neurons receive common inputs, have common outputs, are interconnected, and may well constitute a fundamental computation unit of the cerebral cortex. However, Hinton's paper on "Matrix Capsule with EM Routing'" was unfortunately not accompanied by a release of source code, which left interested researchers attempting to implement the architecture and reproduce the benchmarks on their own. This has certainly slowed the progress of research building on this work. While writing our own implementation, we noticed several common mistakes in other open source implementations that we came across. In this paper we share some of these learnings, specifically focusing on three implementation pitfalls and how to avoid them: (1) parent capsules with only one child; (2) normalising the amount of data assigned to parent capsules; (3) parent capsules at different positions compete for child capsules. While our implementation is a considerable improvement over currently available implementations, it still falls slightly short of the performance reported by Hinton et al. (2018). The source code for this implementation is available on GitHub at the following URL: https://github.com/IBM/matrix-capsules-with-em-routing. 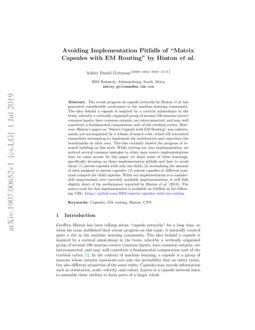 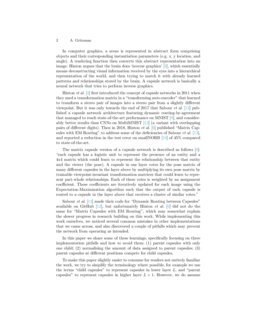 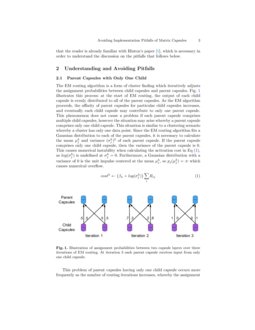 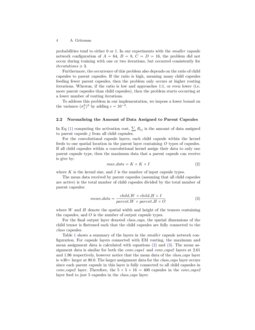 Geoffrey Hinton has been talking about “capsule networks” for a long time, so when his team published their recent progress on this topic, it naturally created quite a stir in the machine learning community. The idea behind a capsule is inspired by a cortical minicolumn in the brain, whereby a vertically organised group of around 100 neurons receive common inputs, have common outputs, are interconnected, and may well constitute a fundamental computation unit of the cerebral cortex [2]

. In the context of machine learning, a capsule is a group of neurons whose outputs represents not only the probability that an entity exists, but also different properties of the same entity. Capsules may encode information such as orientation, scale, velocity, and colour. Layers in a capsule network learn to assemble these entities to form parts of a larger whole.

In computer graphics, a scene is represented in abstract form comprising objects and their corresponding instantiation parameters (e.g. x, y location, and angle). A rendering function then converts this abstract representation into an image. Hinton argues that the brain does ‘inverse graphics’ [3]

, which essentially means deconstructing visual information received by the eyes into a hierarchical representation of the world, and then trying to match it with already learned patterns and relationships stored by the brain. A capsule network is basically a neural network that tries to perform inverse graphics.

Hinton et al. [4] first introduced the concept of capsule networks in 2011 when they used a transformation matrix in a “transforming auto-encoder” that learned to transform a stereo pair of images into a stereo pair from a slightly different viewpoint. But it was only towards the end of 2017 that Sabour et al. [13] published a capsule network architecture featuring dynamic routing-by-agreement that managed to reach state-of-the-art performance on MNIST [9], and considerably better results than CNNs on MultiMNIST [13] (a variant with overlapping pairs of different digits). Then in 2018, Hinton et al. [6] published “Matrix Capsules with EM Routing” to address some of the deficiencies of Sabour et al. [13], and reported a reduction in the test error on smallNORB [10] of 45% compared to state-of-the-art.

: “each capsule has a logistic unit to represent the presence of an entity and a 4x4 matrix which could learn to represent the relationship between that entity and the viewer (the pose). A capsule in one layer votes for the pose matrix of many different capsules in the layer above by multiplying its own pose matrix by trainable viewpoint-invariant transformation matrices that could learn to represent part-whole relationships. Each of these votes is weighted by an assignment coefficient. These coefficients are iteratively updated for each image using the Expectation-Maximization algorithm such that the output of each capsule is routed to a capsule in the layer above that receives a cluster of similar votes.”

Sabour et al. [13] made their code for “Dynamic Routing between Capsules” available on GitHub [12], but unfortunately Hinton et al. [6] did not do the same for “Matrix Capsules with EM Routing”, which may somewhat explain the slower progress in research building on this work. While implementing this work ourselves, we noticed several common mistakes in other implementations that we came across, and also discovered a couple of pitfalls which may prevent the network from operating as intended.

In this paper we share some of these learnings, specifically focusing on three implementation pitfalls and how to avoid them: (1) parent capsules with only one child; (2) normalising the amount of data assigned to parent capsules; (3) parent capsules at different positions compete for child capsules.

To make this paper slightly easier to consume for readers not entirely familiar the work, we try to simplify the terminology where possible, for example we use the terms “child capsules” to represent capsules in lower layer L, and “parent capsules” to represent capsules in higher layer L+1. However, we do assume that the reader is already familiar with Hinton’s paper [6], which is necessary in order to understand the discussion on the pitfalls that follows below.

2.1 Parent Capsules with Only One Child

The EM routing algorithm is a form of cluster finding which iteratively adjusts the assignment probabilities between child capsules and parent capsules. Fig. 1

This problem of parent capsules having only one child capsule occurs more frequently as the number of routing iterations increases, whereby the assignment probabilities tend to either 0 or 1. In our experiments with the smaller capsule network configuration of A=64, B=8, C=D=16, the problem did not occur during training with one or two iterations, but occurred consistently for iteratations≥3.

To address this problem in our implementation, we impose a lower bound on the variance (σhj)2 by adding ϵ=10−4.

2.2 Normalising the Amount of Data Assigned to Parent Capsules

In Eq (1) computing the activation cost, ∑iRij is the amount of data assigned to parent capsule j from all child capsules.

where K is the kernel size, and I is the number of input capsule types.

where W and H

denote the spatial width and height of the tensors containing the capsules, and

O is the number of output capsule types.

For the final output layer denoted class_caps, the spatial dimensions of the child tensor is flattened such that the child capsules are fully connected to the class capsules.

We now consider the effects of the large discrepancy in assignment data between the class_caps layer and the other layers. While the mean data was calculated under the assumption that all child capsules are active (which is unlikely), nevertheless the actual data assigned to a parent capsule ∑iRij will be proportional to the mean value of the layer.

Consider the computation of the parent activations from the M-step of Procedure 1 in [6]:

Since βu is per capsule type and does not depend on h:

Consider the second term in Eq 4, notice that the cost of activating a parent capsule is scaled by the total amount of data received by that capsule ∑iRij. In Eq (5) the first term λβa sets the operating point on the logistic curve, and the second term determines the perturbations about this point. If the ∑iRij scaling is too small, then all the output activations will not deviate from the operating point. But if the ∑iRij scaling is too large, then all the parent capsules will either be fully active or inactive. The most desirable situation occurs when the input to the logistic function is nicely distributed over a useful range (e.g. [−5,5]), so the output of the logistic function is nicely distributed over the range [0,1].

The impact of the ≈30× difference in assignment data is that the range of the input to the logistic function will not be distributed over a useful range for all capsule layers. The values βa and βv are learned discriminatively for each layer, and can to some extent compensate for this effect. However, since βa and βv are initialised randomly, the problem will be more pronounced at the start of training and may prevent the network from learning.

This problem can be addressed to an extent by carefully initialising βa and βv, which will need to be different for the class_caps layer and the preceding conv_caps1 and conv_caps2 layers. It will also be necessary to ensure that the λ scaling value ensures a useful range for the input to the logistic function at every layer. In our implementation we adopt a different approach, and instead scale the amount of data assigned to a parent capsule (∑iRij) relative to the mean data in a particular layer (see Table 1 for scaling values). We find this approach to be more robust to the initial values of βa and βv.

We found this important detail somewhat tricky to implement, so we describe our implementation below.

With reference to Fig. 3, the first step in computing the votes is tiling the child capsules according to the convolution kernel. The subsequent mapping between child capsules and parent capsules is stored a 2D binary matrix called the spatial routing map. The tiled representation is then multiplied by a tensor containing K transformation matrices (3

in our example), which are learned discriminatively with backpropagation during training. The tiled child capsules at each spatial location are multiplied by the same transformation matrices. The votes are then scaled by the corresponding assignment probabilities

σj, and activation aj of each parent capsule.

Extending from 1D to 2D Convolution

in TensorFlow, and test the

where i is the routing iteration number (e.g. 0–2). The schedule for the increasing the margin in the spread loss is set as follows [5]:

where step is the training step. The batch size is set to 64.

In this paper we discuss three common pitfalls when implementing “Matrix Capsules with EM Routing” by Hinton et al., and how to avoid them. While our implementation performs considerably better than other open source implementations, nevertheless it still falls slightly short of the performance reported by Hinton et al. (2018). The source code for this implementation is available on GitHub at the following URL: https://github.com/IBM/matrix-capsules-with-em-routing.