What is a neuron?

A neuron is the basic building block of perceptrons and neural networks.  They are inspired by biological neurons. In programming, a neuron is a datum and a collection of weights between that neuron and connected neurons.  All of the connections have associated weights to simulate how a neuron’s activation affects corresponding connected neurons.

In biology, if the stimulus is enough for the chemicals involved to pass a certain threshold, then the neuron fires and stimulates all neurons it connects to.  We do not threshold programmed neurons in practice unless they are in the output layer. Instead the datum produced by the summation and the weights are used by connected neurons to determine their level of stimulation.  An output neuron’s data may be pushed through an indicator function which thresholds and activates. Thus, only output neurons can “fire”. 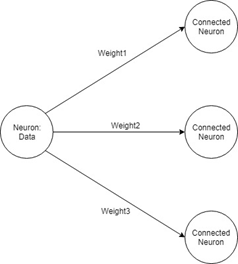