In this paper, we introduce a new three-parameter distribution based on the combination of re-parametrization of the so-called EGNB2 and transmuted exponential distributions. This combination aims to modify the transmuted exponential distribution via the incorporation of an additional parameter, mainly adding a high degree of flexibility on the mode and impacting the skewness and kurtosis of the tail. We explore some mathematical properties of this distribution including the hazard rate function, moments, the moment generating function, the quantile function, various entropy measures and (reversed) residual life functions. A statistical study investigates estimation of the parameters using the method of maximum likelihood. The distribution along with other existing distributions are fitted to two environmental data sets and its superior performance is assessed by using some goodness-of-fit tests. As a result, some environmental measures associated with these data are obtained such as the return level and mean deviation about this level. 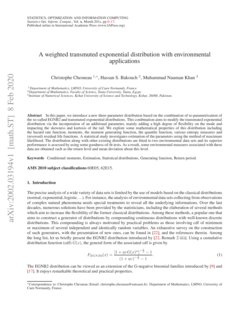 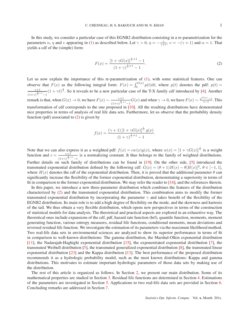 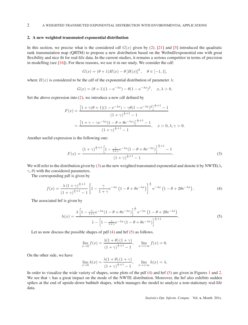 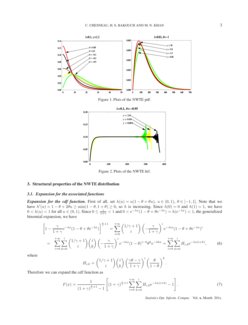 The precise analysis of a wide variety of data sets is limited by the use of models based on the classical distributions (normal, exponential, logistic…). For instance, the analysis of environmental data sets collecting from observations of complex natural phenomena needs special treatments to reveal all the underlying informations. Over the last decades, numerous solutions have been provided by the statisticians, including the elaboration of several methods which aim to increase the flexibility of the former classical distributions. Among these methods, a popular one that aims to construct a generator of distributions by compounding continuous distributions with well-known discrete distributions. This compounding is always motivated by practical problems as those involving cdf of minimum or maximum of several independent and identically random variables. An exhaustive survey on the construction of such generators, with the presentation of new ones, can be found in

[22], and the references therein. Among the long list, let us briefly present the EGNB2 distribution introduced by [22, Remark 2 (ii)]

G(x), the general form of the associated cdf is given by

The EGNB2 distribution can be viewed as an extension of the G-negative binomial families introduced by [9] and [17]. It enjoys remarkable theoretical and practical properties.

In this study, we consider a particular case of this EGNB2 distribution consisting in a re-parametrization for the parameters α, η and υ appearing in (1) as described below. Let γ>0, η=−γγ+1, υ=−(γ+1) and α=1. That yields a cdf of the (simple) form:

. All the resulting distributions have demonstrated nice properties in terms of analysis of real life data sets. Furthermore, let us observe that the probability density function (pdf) associated to (

and takes benefit of the flexibility of the EGNB2 distribution. Its main role is to add a high degree of flexibility on the mode, and the skewness and kurtosis of the tail. We thus obtain a very flexible distribution, which opens new perspectives in terms of the construction of statistical models for data analysis. The theoretical and practical aspects are explored in an exhaustive way. The theoretical ones include expansions of the cdf, pdf, hazard rate function (hrf), quantile function, moments, moment generating function, various entropy measures, residual life functions, conditional moments, mean deviations and reversed residual life function. We investigate the estimation of its parameters via the maximum likelihood method. Two real-life data sets in environmental sciences are analyzed to show its superior performance in terms of fit in comparison to well-known distributions: The gamma distribution, the Marshal-Olkin exponential distribution

The rest of this article is organized as follows. In Section 2, we present our main distribution. Some of its mathematical properties are studied in Section 3. Residual life functions are determined in Section 4. Estimations of the parameters are investigated in Section 5. Applications to two real-life data sets are provided in Section 6. Concluding remarks are addressed in Section 7.

In this section, we precise what is the considered cdf G(x) given by (2). [21] and [5] introduced the quadratic rank transmutation map (QRTM) to propose a new distribution based on the Weibull/exponential one with great flexibility and nice fit for real-life data. In the current studies, it remains a serious competitor in terms of precision in modelling (see [16]). For these reasons, we use it in our study. We consider the cdf:

where H(x) is considered to be the cdf of the exponential distribution of parameter λ:

Set the above expression into (2), we introduce a new cdf defined by

Another useful expression is the following one:

We will refer to the distribution given by (3) as the new weighted transmuted exponential and denote it by NWTE(λ, γ, θ) with the considered parameters.

The corresponding pdf is given by

The associated hrf is given by

Let us now discuss the possible shapes of pdf (4) and hrf (5) as follows.

On the other side, we have

In order to visualize the wide variety of shapes, some plots of the pdf (4) and hrf (5) are given in Figures 1 and 2. We see that γ has a great impact on the mode of the NWTE distribution. Moreover, the hrf also exhibits sudden spikes at the end of upside-down bathtub shapes, which manages the model to analyze a non-stationary real-life data.

3 Structural properties of the NWTE distribution

3.1 Expansion for the associated functions

Therefore we can expand the cdf function as

Expansion for the pdf function. Similar mathematical arguments used for (6) give

On the survival function. Note that

Using (7), we have the following expansion

Another expansion comes from the geometric series decomposition:

By (5) and similar mathematical arguments used for (6) give:

The quantile functions are in widespread use in general statistics to obtain mathematical properties of a distribution and often find representations in terms of lookup tables for key percentiles. For generating data from the NWTE model, let u∼U(0,1). Then, by inverting the cdf (3) and after some algebra, we get the quantile function

The analysis of the variability of the skewness and kurtosis of X can be investigated based on quantile measures. The Bowley skewness is given by

and the Moors’ kurtosis by

These measures are less sensitive to outliers and they exist even for distributions without moments. Figure

3 displays plots of S and K as functions of θ and γ, which show their variability in terms of the shape parameters.

Moments. Using equation (8) and the gamma function γ(ν)=∫+∞0xν−1e−xdx, the r-th moments about the origin is given by

An entropy can be considered as a measure of uncertainty of probability distribution of a random variable. Therefore, we obtain three entropies for the NWTE distribution with investigating a numerical study among them.

On the other side, observing that |θ(1−2e−λx)|<1, similar mathematical arguments used for (6) give :

Hence [f(x)]β can be expanded as

Some numerical values for the three entropies are given in Table 1. It can be observed that these entropies decrease with increasing the parameter values. Moreover, one can see that JMH(δ) has the smallest values comparing with the other entropies considered here.

Here, we introduce an important lemma which will be used in the next sections.

Let Jr(t)=∫t0xrf(x)dx and γ(t,ν)=∫t0xν−1e−xdx be the lower incomplete gamma function. Then we have

Using the equation (8), we have

It can be expressed using (5), (3.3) and Lemma 1. The same remark holds for the r-th reversed moments of the NWTE distribution given by

The residual life is described by the conditional random variable R(t)=X−t∣X>t, t≥0. Using (10), the survival function of the residual lifetime R(t) for the NWTE distribution is given by

The associated cdf is given by

The corresponding pdf is given by

The associated hrf is given by

The mean residual life is defined as

Further, the variance residual life is given by

The reverse residual life is described by the conditional random variable ¯¯¯¯R(t)=t−X∣X≤t, t≥0. Using (3), the survival function of the reversed residual lifetime ¯¯¯¯R(t) for the NWTE distribution is given by