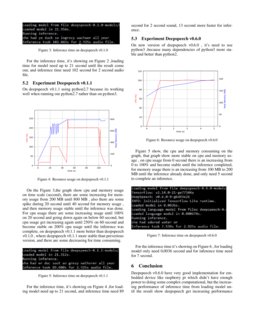 [Baskar et al.2019].Nowadays, voice recognition service needs a user to pay for using the service, and users need pay with a range from four U.S. Dollar until one hundred and fifty U.S. Dollar for every four thousand requests. Google Assistant, Amazon Alexa are led on ASR system for various application [Dumpala et al.2019]. Moreover, for another aspect need always connected with internet to process voice recognition, where ASR ( Automatic Speech Recognition ) provider using API (Application Program Interface ) for processing voice recognition, also user can’t modified what they need. Then, we choose deepspeech by Mozilla, which open-source voice recognition. That has excellent performance, also can use a big dataset using the English language for starting point, and also have many accents for the dataset, this paper based on [Hannun et al.2014] Baidu research paper that publishes in 2016. This paper shows the performance deepspeech from the first version until latest version (0.6.0 version ) using raspberry pi three b+, as a device for implementation deepspeech which have low computational power will show advantages and disadvantages of each deepspeech version. This paper we will show the deepspeech sctructure on ”Deepspeech Neural Network Structure” section, for details information deepseech model . advantages and disadvantages of each deepspeech version is show on ”Pre-trained data details” section. Device details information that will be used on experiment will show on ”Device details” section. For ”Experiment” section provide data and result of the experiment on each deepspeech version. Final conclusion of the experiment section will explain on ”Conclusion” section.

Figure 1 shows a single graph of the neuron on a picture, and formula its show on formula (1) section, where ∑ of wkj,xj

and activation function that denotes by

φ will become a part of a neuron. From the simple neuron, it can be more complex neuron for processing input data.

for fifth layer will take forward and backward part as input using formula (5) and (6):

For pre-trained data, we didn’t training process again, but using same model that provide by deepspeech on each ver-sion, also using same one audio file for testing in each ver-sion deepspeech, the different only on environmtment where deepspeech are running like python version are matched by compability of each deepspeech version.

Deepspeech v0.1.0 accuracy also mention on [Zeng et al.2019] ,with the host transcript is ”I wish you wouldn’t” but deepspeech v0.1.0 show the result ”A sight for sore eyes” , there is some miss on prediction text from an audio file.

Deepspeech v0.3.0, based on Table 2, achieved word error rate 11% on trained American English with LibriSpeech. Also, there is some change than the previous version. The most important on change are they fixed on memory leak and change on trie format. the advantages of deepspeech v0.3.0 are :

For disadvantages on deepspeech v0.3.0 are :

Deepspeech also can implement on many language [Ardila et al.2019] , some languages can be achieved until 15% for non-American English Language.

The disadvantages of deepspeech v0.4.0 are,

The disadvantages of deepspeech v0.5.1 :

And also on Deepspeech v0.6.0, they started using tensorflow lite for inference the process, it’s make more faster while doing the experiment on small raspberry pi 3 b+.

The benefit for using Raspberry Pi is the device only use very small power consumtion that mention by [Bekaroo and Santokhee2016], but we can explore for many things on the raspberry using full linux command, and also is possible to use all of GPIO pins for project.

Table 4 shows the difference and similarity of the module that installed on each version of deepspeech, and only deepspeech version 0.1.0 and 0.1.1 that have same python environment

Experiment for deepspeech v0.1.0 , using python2.7 as environmnet, because it’s only compatible with python2.7, will failed and show some errors if using python3 because the version build on python2.7 environment.

On that Figure 1, show cpu resource usage will highly increase on 20 second and will reduce until 50 second, then will highly increase again until 250% before 60 second and then stable on 200% until inference process already done, on memorry usage, there is increasing from 0 to 800 MB , but in first process there are some spike on some seconds on the range 600 until 800 MB, inference time for one time process audio file is 102 second for 2 second audio file.

For the inference time, it’s showing on Figure 2 ,loading time for model need up to 21 second until the result come out, and inference time need 102 second for 2 second audio file.

On deepspeech v0.1.1 using python2,7 because its working well when running om python2.7 rather than on python3.

For the inference time, it’s showing on Figure 4 ,for loading model need up to 21 second, and inference time need 89 second for 2 second sound, 13 second more faster for inference.

On new version of deepspeech v0.6.0 , it’s need to use python3 ,because many dependencies of python3 more stable and better than python2.

Figure 5 show, the cpu and memory consuming on the graph, that graph show more stable on cpu and memory usage , on cpu usage from 0 second there is an increasing from 0 to 100% and become stable until the inference completed, for memory usage there is an increasing from 100 MB to 200 MB until the inference already done, and only need 5 second to complete an inference.