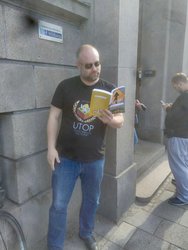 Julian Togelius is an associate professor in the Department of Computer Science and Engineering at the Tandon School of Engineering, New York University. Prior to that, he was an associate professor at the Centre, IT University of Copenhagen for Computer Games Research. He has a BA from Lund University, an MSc from Sussex University and a PhD from Essex University. Togelius is considered one of the world’s most accomplished experts at the game and AI intersection and offers key contributions in the generation of process content, player models and general AI video games.

Research by Togelius has been published in internationally respected media such as New Scientist, The Monde, The Verge, The Economist and MIT.

Baba is Y'all 2.0: Design and Investigation of a Collaborative Mixed-Initiative System

PINSKY is a system for open-ended learning through neuroevolution in gam...
Aaron Dharna, et al. ∙

Consider a walking agent that must adapt to damage. To approach this tas...
Bryon Tjanaka, et al. ∙

Impressions of the GDMC AI Settlement Generation Challenge in Minecraft

An Evolutionary Algorithm for Task Scheduling in Crowdsourced Software Development

The complexity of software tasks and the uncertainty of crowd developer ...
Razieh Saremi, et al. ∙

It has recently been shown that reinforcement learning can be used to tr...
Sam Earle, et al. ∙

This article outlines what we learned from the first year of the AI Sett...
Christoph Salge, et al. ∙

Multi-Stage Transfer Learning with an Application to Selection Process

Generating and Adapting to Diverse Ad-Hoc Cooperation Agents in Hanab

Hanabi is a cooperative game that brings the problem of modeling other p...
Rodrigo Canaan, et al. ∙

Generating and Adapting to Diverse Ad-Hoc Cooperation Agents in Hanabi

Hanabi is a cooperative game that brings the problem of modeling other p...
Rodrigo Canaan, et al. ∙

Evaluating the Rainbow DQN Agent in Hanabi with Unseen Partners

We investigate how reinforcement learning can be used to train level-des...
Ahmed Khalifa, et al. ∙

Covariance Matrix Adaptation for the Rapid Illumination of Behavior Space

Evaluation of a Recommender System for Assisting Novice Game Designers

The Many AI Challenges of Hearthstone

Games have benchmarked AI methods since the inception of the field, with...
Amy K. Hoover, et al. ∙