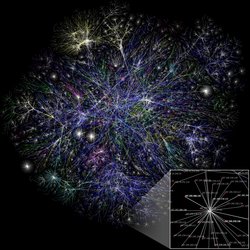 The American computer scientist and software engineer Jeffrey Adgate “Jeff” Dean. He is currently leading the AI division of Google.ai.

Before joining Google He worked for profiling tools, microprocessor architecture and information retrieval at DEC/Compaq’s Western Research Laboratory. His work was completed in close collaboration with Sanjay Ghemawat. Prior to graduating, he worked on the Global AIDS Programme, the World Health Organization, developing statistical modeling software and forecasting the pandemic of HIV/AIDS.

In mid-1999, Dean joined Google and is now head of artificial intelligence. In the course of his work on Google, he developed and implemented large parts of the company’s advertising, crawling, indexing and query-serving systems and various parts of Google’s distributed computer infrastructure. He also worked at various times to improve the quality of searches, statistical machine translation and various internal software development tools; he also played a major role in engineering recruitment.

Dean projects have worked on:

LevelDB, a key value store for open source on disk

DistBelief, a proprietary machine-learning system that has been finished in TensorFlow for deep neural networks

He launches and leads Google Brain, a team that is studying large-scale artificial neural networks and heads Artificial Intelligence efforts since they are split from Google Search.

Dean and his wife Heidi Hopper began making philanthropic grants in 2011 and started the Hopper-Dean Foundation. In 2016, the foundation awarded $1 million each to UC Berkeley and MIT to support science, technology, engineering and mathematics diversity programs.

Dean is married and has two girls.

Elected to the National Engineering Academy

Fellow of the Computing Machinery Association

Fellow of the American Academy of Arts and Sciences He has been widely credited with numerous contributions in this field, both within Google and in the general field of computer science.

Dean contributed a chapter to the book 2018 by the American futurist Martin Ford, Architects of Intelligence, The Truth About AI from the People Building it.

A Review of Sparse Expert Models in Deep Learning

The Carbon Footprint of Machine Learning Training Will Plateau, Then Shrink

The number of parameters in state of the art neural networks has drastic...
Aidan N. Gomez, et al. ∙

In this work, we present a learning-based approach to chip placement, on...
Azalia Mirhoseini, et al. ∙

The past few years have witnessed a growth in size and computational req...
Azalia Mirhoseini, et al. ∙

The capacity of a neural network to absorb information is limited by its...
Noam Shazeer, et al. ∙

Distilling the Knowledge in a Neural Network