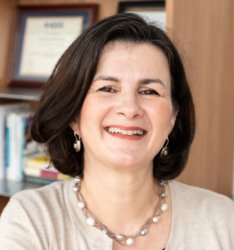 Diana Marculescu is Department Chair, Cockrell Family Chair for Engineering Leadership #5, and Professor, Motorola Regents Chair in Electrical and Computer Engineering #2, at the University of Texas at Austin.

She received the Dipl.Ing. degree in computer science from the "Politehnica" University of Bucharest, Bucharest, Romania (1991), and the Ph.D. degree in computer engineering from the University of Southern California, Los Angeles, CA (1998). Her research interests include energy- and reliability-aware computing, hardware aware machine learning, and computing for sustainability and natural science applications.

Diana was a recipient of the National Science Foundation Faculty Career Award (2000-2004), the ACM SIGDA Technical Leadership Award (2003), the Carnegie Institute of Technology George Tallman Ladd Research Award (2004), and several best paper awards. She was an IEEE Circuits and Systems Society Distinguished Lecturer (2004-2005) and the Chair of the Association for Computing Machinery (ACM) Special Interest Group on Design Automation (2005-2009). Diana chaired several conferences and symposia in her area and is currently an Associate Editor for IEEE Transactions on Computers. She was selected as an ELATE Fellow (2013-2014), and is the recipient of an Australian Research Council Future Fellowship (2013-2017), the Marie R. Pistilli Women in EDA Achievement Award (2014), and the Barbara Lazarus Award from Carnegie Mellon University (2018). Diana is a Fellow of ACM and IEEE.

CPT-V: A Contrastive Approach to Post-Training Quantization of Vision Transformers

An audio-visual event (AVE) is denoted by the correspondence of the visu...
Tanvir Mahmud, et al. ∙

QUIDAM: A Framework for Quantization-Aware DNN Accelerator and Model Co-Exploration

Width Transfer: On the (In)variance of Width Optimization

The Architectural Implications of Distributed Reinforcement Learning on CPU-GPU Systems

One Weight Bitwidth to Rule Them All

Fine-tuning through knowledge transfer from a pre-trained model on a lar...
Ting-Wu Chin, et al. ∙

Can we automatically design a Convolutional Network (ConvNet) with the h...
Dimitrios Stamoulis, et al. ∙

Can we automatically design a Convolutional Network (ConvNet) with the h...
Dimitrios Stamoulis, et al. ∙

Understanding the Impact of Label Granularity on CNN-based Image Classification

The rising use of deep learning and other big-data algorithms has led to...
Biresh Kumar Joardar, et al. ∙

"How much energy is consumed for an inference made by a convolutional ne...
Ermao Cai, et al. ∙