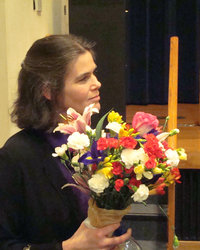 Daphne Koller is an Israeli and American Professor at the Stanford University Department of Computer Science and an MacArthur Fellow. She is one of the founders of the online learning platform Coursera. Her general field of research is artificial intelligence and its biomedical applications. The 2004 MIT Technology Review article entitled “10 Emerging Technologies That Will Change Your World” on Bayesian machine learning featured Koller.

In 1985 Koller graduated from the Hebrew University of Jerusalem at the age of 17 and in 1986, at the age of 18, received his Masters degree from the same institution. She completed her PhD with Joseph Halpern at Stanford in 1993.

Koller was the first ever $150,000 ACM-Infosys Foundation Award in Computing Sciences in April 2008. Coursera was launched by she and Andrew Ng, fellow Stanford IT professor at the AI Laboratory. She served as co-CEO with Ng and then as Coursera President. She has been recognized for her contributions to online learners by being named one of the 10 most important people of Newsweek in 2010, one of Time magazine’s 100 most influential people in 2012, and one of Fast Company’s most creative people in 2014. She left Calico in 2018 to join Insitro, a drug discovery startup. Koller focuses primarily on representation, inference and learning and decision-making, with a focus on computer vision and computer biology applications. In collaboration with Suchi Saria and Anna Penn of Stanford University, Koller developed PhysiScore that employs a number of information elements to predict whether premature babies are likely to have health problems. From February 2012, she provided a free online course on the subject, including Lise Getoor, Mehran Sahami, Suchi Saria, Eran Segal, and Ben Taskar.

Her distinctions and awards include:

1996: Faculty Fellowship of the Sloan Foundation

2001: Computers and Pension Prize for IJCAI

2011: Elected to the National Engineering Academy

2013: 100 Most Influential People of Time Magazine

Koller has contributed one chapter to the 2018 book Architects of intelligence: The Truth About AI by the American futurist Martin Ford from the People Building it.