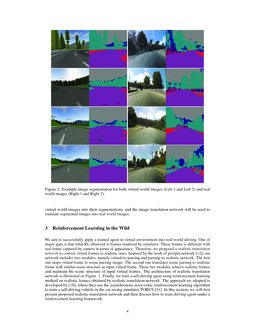 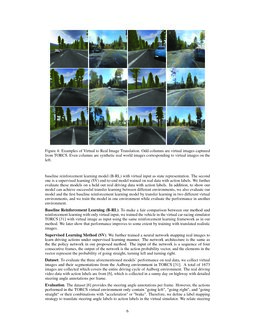 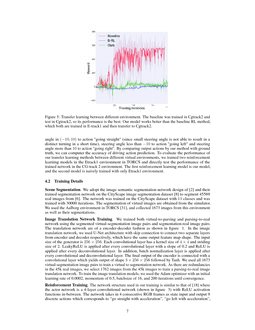 provides an early example of using neural network for autonomous driving. Their model is simple and direct, which maps image inputs to action predictions with a shallow network. Powered by deep learning especially a convolutional neural network, NVIDIA

learns a mapping between input images to a number of key perception indicators, which are closely related to the affordance of a driving state. However, the learned affordance must be associated with actions through hand-engineered rules. These supervised methods work relatively well in simple tasks such as lane-following and driving on a highway. On the other hand, imitation learning can also be regarded as supervised learning approach

[Zhang and Cho(2016)], where the agent observes the demonstrations performed by some experts and learns to imitate the actions of the experts. However, an intrinsic shortcoming of imitation learning is that it has the covariate shift problem [Ross and Bagnell(2010)] and can not generalize very well to scenes never experienced before.

Reinforcement Learning in the Wild

. Performing reinforcement learning with a car driving simulator and transferring learned models to the real environment could enable faster, lower-cost training, and it is much safer than training with a real car. However, real-world driving challenge usually spans a diverse range, and it is often significantly different from the training environment in a car driving simulator in terms of their visual appearance. Models trained purely on virtual data do not generalize well to real images

Image Synthesis and Image Translation. Image translation aims to predict image in some specific modality, given an image from another modality. This can be treated as a generic method as it predicts pixels from pixels. Recently, the community has made significant progress in generative approaches, mostly based on generative adversarial networks [Goodfellow et al.(2014)Goodfellow, Pouget-Abadie, Mirza, Xu, Warde-Farley, Ozair, Courville, and Bengio]. To name a few, the work of [Wu et al.(2016)Wu, Zhang, Xue, Freeman, and Tenenbaum] explored the use of VAE-GAN [Larsen et al.(2015)Larsen, Sønderby, and Winther] in generating 3D voxel models, and the work of [Wang and Gupta(2016)] proposed a cascade GAN to generate natural images by structure and style. More recently, the work of [Isola et al.(2016)Isola, Zhu, Zhou, and Efros]

2 Reinforcement Learning in the Wild

We aim to successfully apply a driving model trained entirely in virtual environment to real-world driving challenges. One of the major gaps is that what the agent observes are frames rendered by a simulator, which are different from real world frames in terms of their appearance. Therefore, we proposed a realistic translation network to convert virtual frames to realistic ones. Inspired by the work of image-to-image translation network [Isola et al.(2016)Isola, Zhu, Zhou, and Efros], our network includes two modules, namely virtual-to-parsing and parsing-to-realistic network. The first one maps virtual frame to scene parsing image. The second one translates scene parsing to realistic frame with similar scene structure as the input virtual frame. These two modules generate realistic frames that maintain the scene parsing structure of input virtual frames. The architecture of realistic translation network is illustrated on Figure  1. Finally, we train a self-driving agent using reinforcement learning method on realistic frames obtained by realistic translation network. The approach we adopt is developed by [Mnih et al.(2016)Mnih, Badia, Mirza, Graves, Lillicrap, Harley, Silver, and Kavukcuoglu], where they use the asynchronous actor-critic reinforcement learning algorithm to train a self-driving vehicle in the car racing simulator TORCS [Wymann et al.(2000)Wymann, Espié, Guionneau, Dimitrakakis, Coulom, and Sumner]. In this section, we will first present proposed realistic translation network and then discuss how to train driving agent under a reinforcement learning framework.

z to output image s:G:z→s, while conditional GANs take in both an image x and a noise vector z, and generate another image s:G:{x,z}→s, where s is usually in a different domain compared with x (For example, translate images to their segmentations).

The objective of a conditional GAN can be expressed as,

where G is the generator that tries to minimize this objective and D is the adversarial discriminator that acts against G to maximize this objective. In other words, G∗=argminGmaxDLcGAN(G,D). In order to suppress blurring, a L1 loss regularization term is added, which can be expressed as,

Therefore, the overall objective for the image-to-image translation network is,

where λ is the weight of regularization.

Our network consists of two image-to-image translation networks, both networks use the same loss function as equation

3. The first network translates virtual images x to their segmentations s:G1:{x,z1}→s, and the second network translates segmented images s into their realistic counterparts y:G2:{s,z2}→y, where z1,z2 are noise terms to avoid deterministic outputs. As for GAN neural network structures, we use the same generator and discriminator architectures as used in [Isola et al.(2016)Isola, Zhu, Zhou, and Efros].

to train the self driving vehicle, which has performed well on various machine learning tasks. A3C algorithm is a fundamental Actor-Critic algorithm that combines several classic reinforcement learning algorithms with the idea of asynchronous parallel threads. Multiple threads run at the same time with unrelated copies of the environment, generating their own sequences of training samples. Those actors-learners proceed as though they are exploring different parts of the unknown space. For one thread, parameters are synchronized before an iteration of learning and updated after finishing it. The details of A3C algorithm implementation can be found in

In order to encourage the agent to drive faster and avoid collisions, we define the reward function as

where vt is the speed (in m/s) of the agent at time step t, α is the angle (in rad) between the agent’s speed and the tangent line of the track, and dist(t)center is the distance between the center of the agent and the middle of the track. β,γ are constants and are determined at the beginning of training. We take β=0.006,γ=−0.025 in our training.

In this experiment, we trained our proposed reinforcement learning model with realistic translation network. We first trained the virtual to real image translation network, and then used the trained network to filter virtual images in simulator to realistic images. These realistic images were then feed into A3C to train a driving policy. Finally, the trained policy was tested on a real world driving data to evaluate its steering angle prediction accuracy.

For comparison, we also trained a supervised learning model to predict steering angles for every test driving video frame. The model is a deep neural network that has the same architecture design as the policy network in our reinforcement learning model. The input of the network is a sequence of four consecutive frames, the output of the network is the action probability vector, and elements in the vector represent the probability of going straight, turning left and turning right. The training data for the supervised learning model is different from the testing data that is used to evaluate model performance. In addition, another baseline reinforcement learning model (B-RL) is also trained. The only difference between B-RL and our method is that the virtual world images were directly taken by the agent as state inputs. This baseline RL is also tested on the same real world driving data.

Dataset. The real world driving video data are from [Chen(2016)], which is collected in a sunny day with detailed steering angle annotations per frame. There are in total around 45k images in this dataset, of which 15k were selected for training the supervised learning model, and another 15k were selected and held out for testing. To train our realistic translation network, we collected virtual images and their segmentations from the Aalborg environment in TORCS. A total of 1673 images were collected which covers the entire driving cycle of Aalborg environment.

Image Translation Network Training. We trained both virtual-to-parsing and parsing-to-real network using the collected virtual-segmentation image pairs and segmentation-real image pairs. The translation networks are of a encoder-decoder fashion as shown in figure  1. In the image translation network, we used U-Net architecture with skip connection to connect two separate layers from encoder and decoder respectively, which have the same output feature map shape. The input size of the generator is 256×256. Each convolutional layer has a kernel size of 4×4

and striding size of

Reinforcement Training. The RL network structure used in our training is similar to that of [Mnih et al.(2016)Mnih, Badia, Mirza, Graves, Lillicrap, Harley, Silver, and Kavukcuoglu] where the actor network is a 4-layer convolutional network (shown in figure  3

Image Segmentation Results. We used image segmentation model trained on the cityscape [Cordts et al.(2016)Cordts, Omran, Ramos, Rehfeld, Enzweiler, Benenson, Franke, Roth, and Schiele] dataset to segment both virtual and real images. Examples are shown in figure  2. As shown in the figure, although the original virtual image and real image look quite different, their scene parsing results are very similar. Therefore, it is reasonable to use scene parsing as the interim to connect virtual images and real images.

Qualitative Result of Realistic Translation Network. Figure  4 shows some representative results of our image translation network. The odd columns are virtual images in TORCS, and the even columns are translated realistic images. The images in the virtual environment appears to be darker than the translated images, as the real images used to train the translation network is captured in a sunny day. Therefore, our model succeed to synthesize realistic images of similar appearance with the original ground truth real images.

Reinforcement Training Results. The results for virtual to real reinforcement learning on real world driving data are shown in table  LABEL:table:acc. Results show that our proposed method has a better overall performance than the baseline method (B-RL), where the reinforcement training agent is trained in a virtual environment without seeing any real data. The supervised method (SV) has the best overall performance, however, was trained with large amounts of supervised labeled data.

The result for transfer learning in different virtual environments is shown in figure 5. Obviously, standard A3C (Oracle) trained and tested in the same environment gets the best performance. However, our model performs better than the domain randomization method, which requires training in multiple environments to generalize. As mentioned in [Sadeghi and Levine(2016)], domain randomization requires lots of engineering work to make it generalize. Our model succeeds by observing translated images from E-track1 to Cg-track2, which means the model already gets training in an environment that looks very similar to the test environment (Cg-track2), thus the performance is improved.

We proved through experiments that by using synthetic real images as training data in reinforcement learning, the agent generalizess better in a real environment than pure training with virtual data or training with domain randomization. The next step would be to design a better image-to-image translation network and a better reinforcement learning framework to surpass the performance of supervised learning.

Thanks to the bridge of scene parsing, virtual images can be translated into realistic images which maintain their scene structure. The learnt reinforcement learning model on realistic frames can be easily applied to real-world environment. We also notice that the translation results of a segmentation map are not unique. For example, segmentation map indicates a car, but it does not assign which color of that car should be. Therefore, one of our future work is to make parsing-to-realistic network output various possible appearances (e.g. color, texture). In this way, bias in reinforcement learning training would be largely reduced.

We provide the first example of training a self-driving vehicle using reinforcement learning algorithm by interacting with a synthesized real environment with our proposed image-to-segmentation -to-image framework. We show that by using our method for RL training, it is possible to obtain a self driving vehicle that can be placed in the real world.