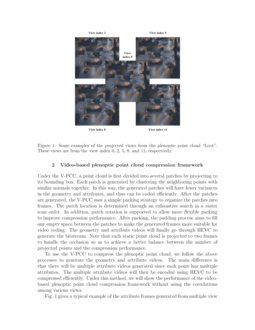 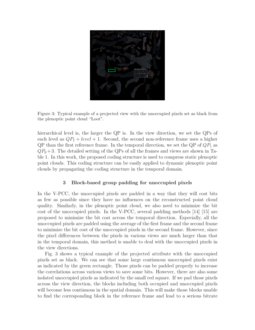 A point cloud is a set of 3D points that can be used to represent a 3D surface. Each point is usually associated with one single color along with other attributes. The point cloud can be used in many applications involving the rendering of 3D objects [1]

such as 3D immersive telepresence and 6 degree-of-freedom virtual reality. However, the point cloud with only one single color is essentially not realistic since the colors of the real world objects may vary significantly along with the change of the view angles. Recently, 8i captures several plenoptic point clouds with different colors in different view angles

[2]. These point clouds are more realistic but also much larger, and thus bring more burdens to the communication and storage. For example, the 12 or 13 attributes in the plenoptic point clouds make the attributes of the point clouds 12 or 13 times larger. Therefore, there is an urgent need to compress them efficiently.

The first group of works focusing on attribute compression is the transform-based method. Zhang et al. [6]

[7] introduced the Region-based Adaptive Hierarchical Transform (RAHT) to obtain a better balance between the complexity and the performance. This work is adopted in the geometry-based point cloud compression (G-PCC) standard [8] and is the recommended algorithm to compress the static dense point cloud. The second group of works focusing on attribute compression is the mapping-based method. As a representative, Mammou et al. [8] proposed a video-based point cloud compression (V-PCC) method to project the point cloud to 2-D videos patch by patch and compress them using high efficiency video coding (HEVC) [9]. Due to the high efficiency of the 2-D video compression standard, the coding efficiency of the V-PCC is very high. It is shown in one recent work that the static dense point cloud can be also coded efficiently using V-PCC [10]. The third group of works is the prediction-based method mainly designed for the sparse point cloud attribute. Mammou et al. [8] introduced a layer-based prediction to predict the point cloud from its coarse representation. Kathariya et al. [11] proposed using kd-tree to divide the point cloud into various layers to further improve the compression performance.

Therefore, in this paper, we first extend the V-PCC to support the plenoptic point cloud by generating multiple attribute videos. Under the current V-PCC framework, these attribute videos are encoded independently. Then based on the observation that these videos from multiple views have very high correlations, we propose encoding them using multiview high efficiency video coding (MV-HEVC) [13] to utilize the correlations among various attributes. Furthermore, as the unoccupied pixels will have no influences on the reconstructed quality of the plenoptic point cloud, we propose a block-based group padding method that unifies the unoccupied attribute pixels from different views to reduce their bit cost.

The rest of this paper is organized as follows. In Section 2, we will introduce the proposed video-based plenoptic point cloud compression framework. The block-based padding for the unoccupied pixels will be introduced in Section 3. Section 4 will describe the experimental results in detail. Section 5 will conclude the paper.

Under the V-PCC, a point cloud is first divided into several patches by projecting to its bounding box. Each patch is generated by clustering the neighboring points with similar normals together. In this way, the generated patches will have fewer variances in the geometry and attributes, and thus can be coded efficiently. After the patches are generated, the V-PCC uses a simple packing strategy to organize the patches into frames. The patch location is determined through an exhaustive search in a raster scan order. In addition, patch rotation is supported to allow more flexible packing to improve compression performance. After packing, the padding process aims to fill any empty space between the patches to make the generated frames more suitable for video coding. The geometry and attribute videos will finally go through HEVC to generate the bitstream. Note that each static point cloud is projected to two frames to handle the occlusion so as to achieve a better balance between the number of projected points and the compression performance.

Fig. 1 gives a typical example of the attribute frames generated from multiple view angles. We can see that the generated attribute frames from various view angles are very similar despite some pixel differences. Therefore, we propose using MV-HEVC to exploit the correlations from multiple views to compress them more efficiently. As we have mentioned, each static point cloud can be projected to two frames. Therefore, using a 13-view static point cloud as an example, we utilize the multiview encoding structure as shown in Fig. 2.

In Fig. 2, the indices from 0 to 12 indicate the index of each view. The sub-indices 0 and 1 are the two frames projected from one point cloud. The arrows among various squares in the figure indicate the reference relationships among various views and frames. As shown in Fig. 2, we organize a hierarchical coding structure with group of pictures (GOP) size 8 in the view direction. In this way, all the views are divided into 4 hierarchical levels. All the views are coded as B frames using bi-directional prediction to exploit the correlations among various views. In the temporal domain, as the two frames projected from one static point cloud has much larger correlations than that among various views, the second frame will only reference the first frame with the same view index under the proposed reference structure.

In addition to the reference relationship, the quantization parameters (QPs) of various views and frames are also important to the compression performance. Currently, we set the QPs according to the following basic rule. First, the higher the hierarchical level is, the larger the QP is. In the view direction, we set the QPs of each level as QPI+level+1. Second, the second non-reference frame uses a higher QP than the first reference frame. In the temporal direction, we set the QP of QP1 as QP0+3. The detailed setting of the QPs of all the frames and views are shown in Table 1. In this work, the proposed coding structure is used to compress static plenoptic point clouds. This coding structure can be easily applied to dynamic plenoptic point clouds by propagating the coding structure in the temporal domain.

After the detection of the continuous unoccupied pixels, we will pad them using the average value of all the views in both frame 0 and frame 1,

where N is number of views for the plenoptic point cloud, i is the frame index, j is the view index, and fi,j is the value to be padded for each position. After the above padding scheme, in both the view direction and temporal direction, we can obtain a very good prediction for the continuous unoccupied pixels, and thus the bitrate of the unoccupied pixels can be significantly reduced.

The proposed algorithms are implemented in the V-PCC reference software TMC-7.0 [16] to compare with the state-of-the-art method RAHT-KLT [12]. We test all the static plenoptic point clouds defined in [2]. The characteristics of all the tested static plenoptic point clouds are shown in Table 2. When verifying the performance of the proposed extension of V-PCC, we follow the V-PCC common test condition [17] to test various bitrates from r1 (low bitrate) to r5 (high bitrate). We use the all intra configuration to generate the results since we have only one static plenoptic point cloud to be compressed. When verifying the performance of the proposed multiview-based solution, we use the same QP settings for the I frames as the V-PCC-based method. The QPs of the other views and frames are set according to Table 1

. Note that the average peak signal to noise ratio (PSNR) of all the views is used as the quality metric for the attribute.

Table 5 shows the performance of the proposed block-padding method under our proposed multiview-based solution. We can see that the proposed block-based padding can provide an average of 13.3%, 11.5%, and 13.6% performance improvements with respect to only the attribute bits for the Luma, Cb, and Cr components, respectively. With respect to the total bitrate, the proposed algorithm can bring over 3.6% bitrate savings on average for both the geometry and attribute. The experimental results demonstrate that through making the unoccupied pixel with higher correlations, the block-based padding algorithm can bring obvious bitrate saving for the unoccupied pixels so as to improve the overall performance.

Two examples of the R-D curves for all the above-mentioned methods are shown in Fig. 4. We can see that the V-PCC without considering the view correlations shows the worst performance. The multiview-video solution shows a better performance than the RAHT-KLT, especially in the low bitrate case. The proposed group padding algorithm can further improve the performance by saving the bit cost of the unoccupied pixels.