VAST, the Valence-Assessing Semantics Test, is a novel intrinsic evaluation task for contextualized word embeddings (CWEs). VAST uses valence, the association of a word with pleasantness, to measure the correspondence of word-level LM semantics with widely used human judgments, and examines the effects of contextualization, tokenization, and LM-specific geometry. Because prior research has found that CWEs from GPT-2 perform poorly on other intrinsic evaluations, we select GPT-2 as our primary subject, and include results showing that VAST is useful for 7 other LMs, and can be used in 7 languages. GPT-2 results show that the semantics of a word incorporate the semantics of context in layers closer to model output, such that VAST scores diverge between our contextual settings, ranging from Pearson's rho of .55 to .77 in layer 11. We also show that multiply tokenized words are not semantically encoded until layer 8, where they achieve Pearson's rho of .46, indicating the presence of an encoding process for multiply tokenized words which differs from that of singly tokenized words, for which rho is highest in layer 0. We find that a few neurons with values having greater magnitude than the rest mask word-level semantics in GPT-2's top layer, but that word-level semantics can be recovered by nullifying non-semantic principal components: Pearson's rho in the top layer improves from .32 to .76. After isolating semantics, we show the utility of VAST for understanding LM semantics via improvements over related work on four word similarity tasks, with a score of .50 on SimLex-999, better than the previous best of .45 for GPT-2. Finally, we show that 8 of 10 WEAT bias tests, which compare differences in word embedding associations between groups of words, exhibit more stereotype-congruent biases after isolating semantics, indicating that non-semantic structures in LMs also mask biases. 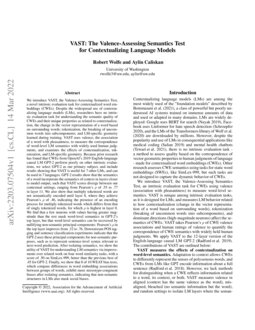 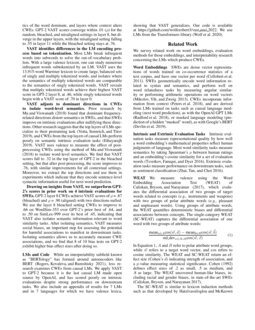 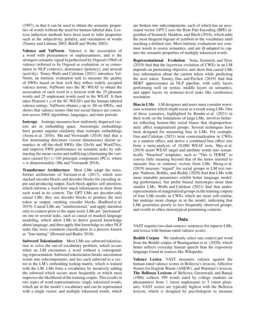 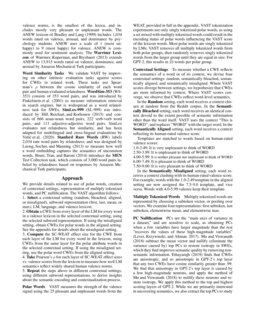 "Thy algorithm shalt not bear false witness": An Evaluation of Multiclass Debiasing Methods on Word Embeddings

Gender Bias in Word Embeddings: A Comprehensive Analysis of Frequency, Syntax, and Semantics