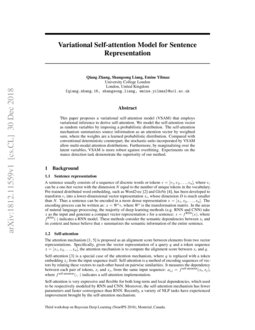 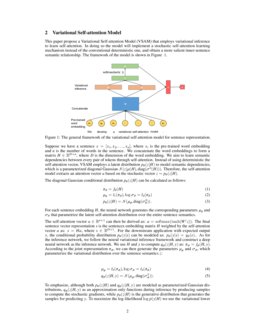 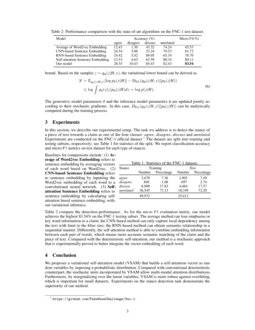 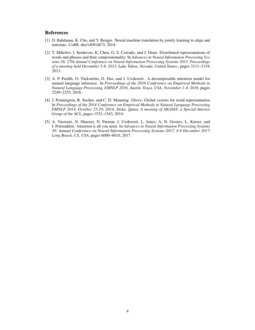 A sentence usually consists of a sequence of discrete words or tokens v=[v1,v2,…,vn], where vi can be a one-hot vector with the dimension N equal to the number of unique tokens in the vocabulary. Pre-trained distributed word embeddings, such as Word2vec DBLP:conf/nips/MikolovSCCD13 and GloVe DBLP:conf/emnlp/PenningtonSM14 , have been developed to transform vi into a lower-dimensional vector representation xi, whose dimension D is much smaller than N. Thus, a sentence can be encoded in a more dense representation x=[x1,x2,…,xn]. The encoding process can be written as: x=Wev, where We

is the transformation matrix. In the areas of natural language processing, the majority of deep learning methods (e.g. RNN and CNN) take

x as the input and generate a compact vector representation s for a sentence: s=fRNN(x), where fRNN(⋅) indicates a RNN model. These methods consider the semantic dependencies between xi and its context and hence believe that s summarizes the semantic information of the entire sentence.

The attention mechanism DBLP:journals/corr/BahdanauCB14 ; DBLP:conf/nips/VaswaniSPUJGKP17 has been proposed as an alignment score between elements from two vector representations. Specifically, given the vector representation of a query q and a token sequence x=[x1,x2,…,xn], the attention mechanism is to compute the alignment score between xi and q.

. It populates hidden representations to a region (in stead of a single point), making it possible to generate diversified data from the vector space or even control the generated samples. It is non-trivial to carry out effective and efficient inference for complex and deep models. Training neural networks as powerful function approximators through backpropagation has given rise to promising frameworks to latent variable modeling

z, it can be seen as stochastic units in deep neural networks. We define the observed parent and child nodes of z as x and y respectively. Hence the joint distribution of the generative model is:

where θ parameters the generative distributions pθ(y|z) and pθ(z|x). The variational lower bound is:

In order to derive a tight lower bound, the variational distribution qϕ(z) should approach the true posterior distribution pθ(z|x,y)

fx(⋅) and fy(⋅) can be any type of deep neural networks that are suitable for the observed data; g(⋅) is an MLP that concatenates the vector representations of the conditioning variables; l(⋅)

is a linear transformation which outputs the parameters of the Gaussian distribution. By sampling from the variational distribution,

z∼qϕ(z|x,y), we are able to carry out stochastic back-propagation to optimize the lower bound.

During the training process, the generative model parameters θ together with the inference model parameters ϕ are updated by stochastic back-propagation based on samples z drawn from qϕ(z|x,y). Let L denote the total number of samples. For the gradients w.r.t. θ, we have the form:

to reduce the variance in stochastic estimation. The update of

ϕ can be carried out by back-propagating the gradients w.r.t. μ and σ:

z has no parent node x. In that case z is directly drawn from the prior p(z) instead of the conditional distribution p(z|x), and γ(z)=log(pθ(y|z)pθ(z))−logqϕ(z|y).

Here we only discuss the scenario where the latent variables are continuous and the parameterized diagonal Gaussian is employed as the variational distribution. However the framework is also suitable for discrete units, and the only modification needed is to replace the Gaussian with a multinomial parameterized by the outputs of a softmax function. Though the reparameterization trick for continuous variables is not applicable for this case, a policy gradient approach (Mnih & Gregor, 2014) can help to alleviate the high variance problem during stochastic estimation.

In this paper we propose a Variational Self-attention Model (VSAM) that employs variational inference to learn self-attention. In doing so the model will implement a stochastic self-attention learning mechanism instead of the conventional deterministic one, and obtain a more salient inner-sentence semantic relationship. The framework of the model is shown in Figure  ???.

Suppose we have a sentence x=[x1,x2,…,xn], where xi is the pre-trained word embedding and n is the number of words in the sentence. We concatenate the word embeddings to form a matrix H∈RD×n, where D is the dimension of the word embedding. We aim to learn semantic dependencies between every pair of tokens through self-attention. Instead of using the deterministic self-attention vector, VSAM employs a latent distribution pθ(z|H) to model semantic dependencies, which is a parameterized diagonal Gaussian N(z|μ(H),diag(σ2(H))). Therefore, the self-attention model extracts an attention vector a based on the stochastic vector z∼pθ(z|H).

The diagonal Gaussian conditional distribution pθ(z|H) can be calculated as follows:

For each sentence embedding H, the neural network generates the corresponding parameters μθ and σθ that parametrize the latent self-attention distribution over the entire sentence semantics.

pθ(y|s) can be modeled as: pθ(y|s)=gθ(s). As for the inference network, we follow the neural variational inference framework and construct a deep neural network as the inference network. We use H and y to compute qϕ(z|H,y) as: πϕ=fϕ(H,y). According to the joint representation πϕ, we can then generate the parameters μϕ and σϕ, which parameterize the variational distribution over the sentence semantics z:

To emphasize, although both pθ(z|H) and qϕ(z|H,y) are modeled as parameterized Gaussian distributions, qϕ(z|H,y) as an approximation only functions during inference by producing samples to compute the stochastic gradients, while pθ(z|H) is the generative distribution that generates the samples for predicting y. To maximize the log-likelihood logp(y|H) we use the variational lower bound. Based on the samples z∼qϕ(z|H,y), the variational lower bound can be derived as

The generative model parameters θ and the inference model parameters ϕ are updated jointly according to their stochastic gradients. In this case, DKL(qϕ(z|H,y)||pθ(z|H)) can be analytically computed during the training process.

In this section, we describe our experimental setup. The task we address is to detect the stance of a piece of text towards a claim as one of the four classes: agree, disagree, discuss and unrelated zhang2018ranking . Experiments are conducted on the FNC-1 official dataset 111 https://github.com/FakeNewsChallenge/fnc-1. The dataset are split into training and testing subsets, respectively; see Table 1 for statistics of the split. We report classification accuracy and micro F1 metrics on test dataset for each type of stances.

Baselines for comparisons include: (1) Average of Word2vec Embedding refers to sentence embedding by averaging vectors of each word based on Word2vec. (2) CNN-based Sentence Embedding

refers to sentence embedding by inputting the Word2vec embedding of each word to a convolutional neural network. (3)

Table 2 shows a comparison of the detection performance. As for the micro F1evaluation metric, our model achieves the highest performance (83.54%) on the FNC-1 testing subset. The average method can lose emphasis or key word information in a claim; the CNN-based method can only capture local dependency among the text with limit to the filter size; the RNN-based method can obtain semantic relationship in a sequential manner. Differently, the self-attention method is able to combine embedding information between each pair of words, which means more accurate semantic matching of the claim and the piece of text. Compared with the deterministic self-attention, our method is a stochastic approach that is experimentally proven to better integrate the vector embedding of each word.

We propose a variational self-attention model (VSAM) that builds a self-attention vector as random variables by imposing a probabilistic distribution. Compared with conventional deterministic counterpart, the stochastic units incorporated by VSAM allow multi-modal attention distributions. Furthermore, by marginalizing over the latent variables, VSAM is more robust against overfitting, which is important for small datasets. Experiments on the stance detection task demonstrate the superiority of our method.