The rank correlation coefficients and the ranked-based statistical tests (as a subset of non-parametric techniques) might be misleading when they are applied to subjectively collected opinion scores. Those techniques assume that the data is measured at least at an ordinal level and define a sequence of scores to represent a tied rank when they have precisely an equal numeric value. In this paper, we show that the definition of tied rank, as mentioned above, is not suitable for Mean Opinion Scores (MOS) and might be misleading conclusions of rank-based statistical techniques. Furthermore, we introduce a method to overcome this issue by transforming the MOS values considering their 95% Confidence Intervals. The rank correlation coefficients and ranked-based statistical tests can then be safely applied to the transformed values. We also provide open-source software packages in different programming languages to utilize the application of our transformation method in the quality of experience domain. 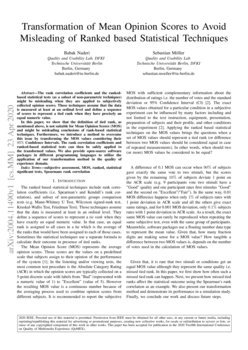 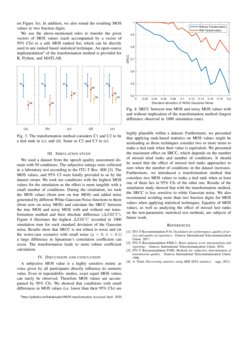 The ranked based statistical techniques include rank correlation coefficients (i.e. Spearman’s and Kendall’s rank correlation), and subset of non-parametric groups comparison tests (e.g. Mann-Whitney U Test, Wilcoxon signed-rank test, Kruskal-Wallis Test, Friedman Test). Those techniques assume that the data is measured at least in an ordinal level. They define a sequence of scores to represent a

tie rank when they have exactly an equal numeric value. In that case, an equal rank is assigned to all cases in a tie which is the average of the ranks that would have been assigned to each of those cases. Sometimes the statistical techniques use a separate formula to calculate their outcome in presence of tied ranks.

The Mean Opinion Score (MOS) represents the average opinion scores. Those scores are the values on a predefined scale that subjects assign to their opinion of the performance of the system [2]

. In the listening and/or viewing tests, the most common test procedure is the Absolute Category Rating (ACR) in which the opinion scores are typically collected on a 5-point discrete scale with labels from ”Bad” (represented with a numeric value of 1) to ”Excellent” (value of 5). However the resulting MOS value is a continuous number because of the averaging process used to combine opinion scores from different subjects. It is recommended to report the subjective MOS with sufficient complementary information about the distribution of ratings i.e. the number of votes and the standard deviation or 95% Confidence Interval (CI)

[4]. The exact MOS values obtained for a particular condition in a subjective experiment can be influenced by many factors including and not limited to the text instruction, equipment, presentation, preparation of subjects and their profile, and other conditions in the experiment [4]. Applying the ranked based statistical techniques on the MOS values brings the questions when a set of MOS values should represent a tied rank (or difference between two MOS values should be considered equal in case of repeated measurements). In other words, when should two (or more) MOS values be considered to be equal?

A difference of 0.1 MOS can occur when 90% of subjects gave exactly the same vote to two stimuli, but the scores given by the remaining 10% of subjects deviate 1 point on the ACR scale (e.g. 9 participants vote two stimuli have a ”Good” quality and one participant rates first stimulus ”Good” and the second on ”Excellent”/”Fair”). In the same way, 0.01 MOS difference happens when only 1% of subjects rates with 1 point deviation in ACR scale and all the others give exact same ratings, and for 0.001 MOS deviation, only 0.1% subjects rates with 1 point deviation in ACR scale. As a result, the exact same MOS value can rarely be reproduced when repeating the same subjective test, even with the same group of participants. Meanwhile, software packages use a floating number data type to represent the mean value. Given that, how many fraction digits are making sense for a MOS value? How tangible a difference between two MOS values is, depends on the number of votes used in the calculation of MOS values.

Given that, it is rare that two stimuli or conditions get an equal MOS value although they represent the same quality i.e. missed tied rank. In this paper, we first show how often such a missed tied rank can happen. Next, we present how missed tied ranks affect the statistical outcome using the Spearman’s rank correlation as an example. We also present our transformation method and demonstrate its performance in a simulation study. Finally, we conclude our work and discuss future steps.

We examined 18 datasets from the domain of speech quality assessment to find out how close are MOS values in a typical dataset and how plausible a tied rank of MOS is. All datasets were created based on the ITU-T Rec. P.800 [3] and included ACR ratings from laboratory-based experiments. On average, they contain 50 degradation conditions. Figure 1 shows the distribution of 95% CIs of the MOS111The 95%

CI is a range of values around the MOS that are believed to contain, with a probability of 95%, the true MOS value (i.e. the actual population MOS)

For the Spearman’s rank correlation, one can calculate the influence of missed tied ranks on the coefficients. ρA,B

A and B which can be calculated as follows

where n is the number of conditions, and r(Xi) represent the rank of ith element in vector X. The effect of a missed tie rank on the coefficient can be calculated as following

where items in B and B′ are equal except222For simplification we only consider two items make a tied rank. items i and j which get two consecutive rank k and k+1 in vector B but are considered to make a tied rank in vector B′ and both get rank k+0.5. Inserting the (1) in (2) leads to

The maximum difference in coefficient that can result by neglecting m tied ranks can be calculated with the following formula333Due to the limited space, solving the (3) for maximum effect and generalizing it to m tied ranks, left as an exercise for the reader..

We use the above-mentioned rules to transfer the given vectors of MOS values (each accompanied by a vector of 95% CIs) to a safe MOS ranked list, which can be directly used in any ranked based statistical technique. An open-source implementation444https://github.com/babaknaderi/MOS-transformation Accessed April  2020 of the transformation method is provided for R, Python, and MATLAB.

We used a dataset from the speech quality assessment domain with 50 conditions. The subjective ratings were collected in a laboratory test according to the ITU-T Rec. 800 [3]. The MOS values, and 95% CI were kindly provided to us by the dataset owner. We took ten conditions with the highest MOS values for the simulation as the effect is more tangible with a small number of conditions. During the simulation, we took the MOS values (from now on true MOS) and added noise generated by different White Gaussian Noise functions to them (from now on noisy MOS) and calculate the SRCC between the true MOS and noisy MOS with and without our transformation method and their absolute difference (ΔSRCC). Figure 4 illustrates the highest ΔSRCC recorded in 1000 simulation runs for each standard deviation of the Gaussian noise. Results show that SRCC is not robust to noise and (in the worst-case scenario) with small noise (μ=0, σ<0.1) a large difference in Spearman’s correlation coefficient can occur. The transformation leads to more robust coefficient calculation.

A subjective MOS value is a highly sensitive metric as votes given by all participants directly influence its numeric value. Even in repeatability studies, exact equal MOS values can rarely be observed. Therefore MOS values are accompanied by 95% CIs. We showed that conditions with small differences in MOS values (i.e. lower than their 95% CIs) are highly plausible within a dataset. Furthermore, we presented that applying rank-based statistics on MOS values might be misleading as those techniques consider two or more items to make a tied rank when their value is equivalent. We presented the maximum effect on SRCC, which depends on the number of missed tried ranks and number of conditions. It should be noted that the effect of missed tied ranks approaches to zero when the number of conditions in the dataset increases. Furthermore, we introduced a transformation method that considers two MOS values to make a tied rank when at least one of them lies in 95% CIs of the other one. Results of the simulation study showed that with the transformation method, the SRCC is less sensitive to white Gaussian noise. We also recommend avoiding more than two fraction digits for MOS values when applying statistical techniques. Equality of MOS values, as well as analyzing the effect of missed tied ranks on the non-parametric statistical test methods, are subjects of future work.