The transfer learning toolkit wraps the codes of 17 transfer learning models and provides integrated interfaces, allowing users to use those models by calling a simple function. It is easy for primary researchers to use this toolkit and to choose proper models for real-world applications. The toolkit is written in Python and distributed under MIT open source license. In this paper, the current state of this toolkit is described and the necessary environment setting and usage are introduced. 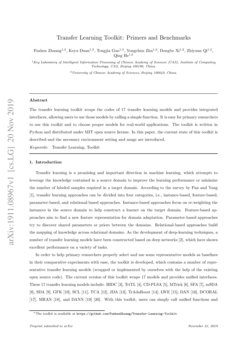 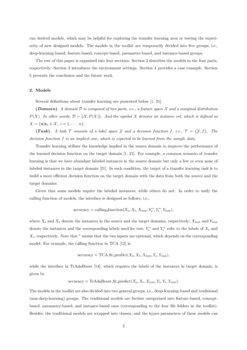 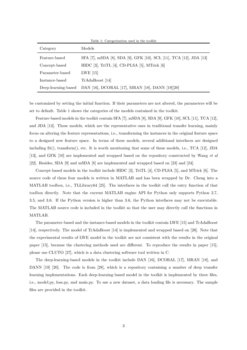 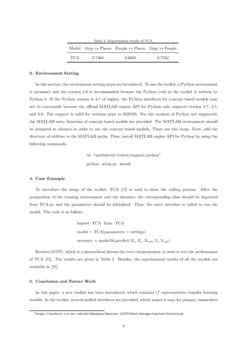 LAYERS: Yet another Neural Network toolkit

LEGOEval: An Open-Source Toolkit for Dialogue System Evaluation via Crowdsourcing

Transfer learning is a promising and important direction in machine learning, which attempts to leverage the knowledge contained in a source domain to improve the learning performance or minimize the number of labeled samples required in a target domain. According to the survey by Pan and Yang

TSK2018ICANN , which have shown excellent performance on a variety of tasks.

In order to help primary researchers properly select and use some representative models as baselines in their comparative experiments with ease, the toolkit is developed, which contains a number of representative transfer learning models (wrapped or implemented by ourselves with the help of the existing open source code). The current version of this toolkit wraps 17 models and provides unified interfaces. These 17 transfer learning models include: HIDC ZLY2013IJCAI , TriTL ZLD2014TC , CD-PLSA ZLS2010CIKM , MTrick ZLX2011SADM , SFA PNS2010WWW , mSDA CXW2012ICML , SDA GBB2011ICML , GFK G2012CVPR , SCL BMP2006EMNLP , TCA PTK2011TNN , JDA LWD2013ICCV , TrAdaBoost DYX2007ICML , LWE GFJ2008KDD , DAN LCW2015ICML , DCORAL SS2016ECCVW , MRAN ZZW2019NN , and DANN GL2015ICML GUA2016JMLR . With this toolkit, users can simply call unified functions and run desired models, which may be helpful for exploring the transfer learning area or testing the superiority of new designed models. The models in the toolkit are temporarily divided into five groups, i.e., deep-learning-based, feature-based, concept-based, parameter-based, and instance-based groups.

The rest of this paper is organized into four sections. Section 2 describes the models in the four parts, respectively. Section 3 introduces the environment settings. Section 4 provides a case example. Section 5 presents the conclusion and the future work.

Several definitions about transfer learning are presented below PY2010TKDE ; ZQD2019ARXIV .

Given that some models require the labeled instances, while others do not. In order to unify the calling function of models, the interface is designed as follows, i.e.,

where Xs and Xt denote the instances in the source and the target domains, respectively; Xtest and Ytest denote the instances and the corresponding labels used for test; Y∗s and Y∗t refer to the labels of Xs and Xt, respectively. Note that ∗ means that the two inputs are optional, which depends on the corresponding model. For example, the calling function in TCA PTK2011TNN is

while the interface in TrAdaBoost DYX2007ICML , which requires the labels of the instances in target domain, is given by

The models in the toolkit are also divided into two general groups, i.e., deep-learning-based and traditional (non-deep-learning) groups. The traditional models are further categorized into feature-based, concept-based, parameter-based, and instance-based ones (corresponding to the four file folders in the toolkit). Besides, the traditional models are wrapped into classes, and the hyper-parameters of these models can be customized by setting the initial function. If their parameters are not altered, the parameters will be set to default. Table 1 shows the categories of the models contained in the toolkit.

Feature-based models in the toolkit contain SFA PNS2010WWW , mSDA CXW2012ICML , SDA GBB2011ICML , GFK G2012CVPR , SCL BMP2006EMNLP , TCA PTK2011TNN , and JDA LWD2013ICCV . These models, which are the representative ones in traditional transfer learning, mainly focus on altering the feature representations, i.e., transforming the instances in the original feature space to a designed new feature space. In terms of these models, several additional interfaces are designed including fit(), transform(), etc. It is worth mentioning that some of these models, i.e., TCA PTK2011TNN , JDA LWD2013ICCV , and GFK G2012CVPR are implemented and wrapped based on the repository constructed by Wang et al W0000XYZ . Besides, SDA GBB2011ICML and mSDA CXW2012ICML are implemented and wrapped based on MAD0000SDAE and DOU0000MSDA .

Concept-based models in the toolkit include HIDC ZLY2013IJCAI , TriTL ZLD2014TC , CD-PLSA ZLS2010CIKM , and MTrick ZLX2011SADM . The source code of these four models is written in MATLAB and has been wrapped by Dr. Cheng into a MATLAB toolbox, i.e., TLLibrary64 ZCL2015IJCAI . The interfaces in the toolkit call the entry function of that toolbox directly. Note that the current MATLAB engine API for Python only supports Python 2.7, 3.5, and 3.6. If the Python version is higher than 3.6, the Python interfaces may not be executable. The MATLAB source code is included in the toolkit so that the user may directly call the functions in MATLAB.

The parameter-based and the instance-based models in the toolkit contain LWE GFJ2008KDD and TrAdaBoost DYX2007ICML , respectively. The model of TrAdaBoost DYX2007ICML is implemented and wrapped based on CHEN0000TAB . Note that the experimental results of LWE model in the toolkit are not consistent with the results in the original paper GFJ2008KDD , because the clustering methods used are different. To reproduce the results in paper GFJ2008KDD , please use CLUTO K0000CLUTO , which is a data clustering software tool written in C.

The deep-learning-based models in the toolkit include DAN LCW2015ICML , DCORAL SS2016ECCVW , MRAN ZZW2019NN , and DANN GL2015ICML GUA2016JMLR . The code is from ZW0000GIT , which is a repository containing a number of deep transfer learning implementations. Each deep-learning-based model in the toolkit is implemented by three files, i.e., model.py, loss.py, and main.py. To use a new dataset, a data loading file is necessary. The sample files are provided in the toolkit.

In this section, the environment setting steps are introduced. To use the toolkit, a Python environment is necessary and the version 3.6 is recommended because the Python code in the toolkit is written by Python 3. If the Python version is 3.7 or higher, the Python interfaces for concept-based models may not be executable because the official MATLAB engine API for Python only supports version 2.7, 3.5, and 3.6. The support is valid for versions prior to R2019b. For the versions of Python not supported, the MATLAB entry functions of concept-based models are provided. The MATLAB environment should be prepared in advance in order to use the concept-based models. There are two steps. First, add the directory of utilities to the MATLAB paths. Then, install MATLAB engine API for Python by using the following commands.

To introduce the usage of the toolkit, TCA PTK2011TNN is used to show the calling process. After the preparation of the running environment and the datasets, the corresponding class should be imported from TCA.py and the parameters should be initialized. Then, the entry interface is called to run the model. The code is as follows.

Reuters-21578111https://archive.ics.uci.edu/ml/datasets/Reuters-21578+Text+Categorization+Collection, which is a hierarchical dataset for text categorization, is used to test the performance of TCA PTK2011TNN . The results are given in Table 2. Besides, the experimental results of all the models are available in ZQD2019ARXIV .

In this paper, a new toolkit has been introduced, which contains 17 representative transfer learning models. In the toolkit, several unified interfaces are provided, which makes it easy for primary researchers to use. The toolkit is written in Python 3 and makes use of a MATLAB toolbox. In the future, we will keep on maintaining, improving, and enriching the toolkit. New representative models will be added to the toolkit and various code languages will be unified.

If you are interested in this toolkit and use it for baselines, please cite this paper and our survey paper ZQD2019ARXIV . Also, feel free to contact us if you have any problem about using this toolkit. (Fuzhen Zhuang: zhuangfuzhen@ict.ac.cn, Keyu Duan: Karen_Duane@buaa.edu.cn)