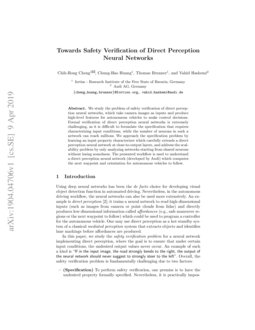 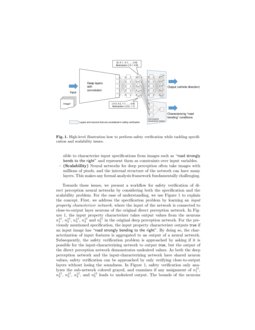 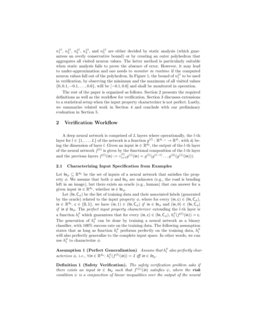 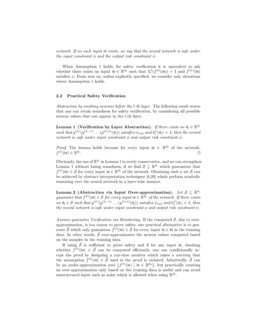 Using deep neural networks has been the de facto choice for developing visual object detection function in automated driving. Nevertheless, in the autonomous driving workflow, the neural networks can also be used more extensively. An example is direct perception [2]; it trains a neural network to read high-dimensional inputs (such as images from camera or point clouds from lidar) and directly produces low-dimensional information called affordances (e.g., safe maneuver regions or the next waypoint to follow) which could be used to program a controller for the autonomous vehicle. One may use direct perception as a hot standby system of a classical mediated perception system that extracts objects and identifies lane markings before affordances are produced.

In this paper, we study the safety verification problem for a neural network implementing direct perception, where the goal is to ensure that under certain input conditions, the undesired output values never occur. An example of such a kind is “If in the input image, the road strongly bends to the right, the output of the neural network should never suggest to strongly steer to the left”. Overall, the safety verification problem is fundamentally challenging due to two factors:

Towards these issues, we present a workflow for safety verification of direct perception neural networks by considering both the specification and the scalability problem. For the ease of understanding, we use Figure 1 to explain the concept. First, we address the specification problem by learning an input property characterizer network, where the input of the network is connected to close-to-output layer neurons of the original direct perception network. In Figure 1, the input property characterizer takes output values from the neurons n171, n172, n173, n174 and n175 in the original deep perception network. For the previously mentioned specification, the input property characterizer outputs true if an input image has “road strongly bending to the right”. By doing so, the characterization of input features is aggregated to an output of a neural network. Subsequently, the safety verification problem is approached by asking if it is possible for the input-characterizing network to output true, but the output of the direct perception network demonstrates undesired values. As both the deep perception network and the input-characterizing network have shared neuron values, safety verification can be approached by only verifying close-to-output layers without losing the soundness. In Figure 1, safety verification only analyzes the sub-network colored grayed, and examines if any assignment of n171, n172, n173, n174, and n175 leads to undesired output. The bounds of the neurons n171, n172, n173, n174, and n175 are either decided by static analysis (which guarantees an overly conservative bound) or by creating an outer polyhedron that aggregates all visited neuron values. The latter method is particularly suitable when static analysis fails to prove the absence of error. However, it may lead to under-approximation and one needs to monitor in runtime if the computed neuron values fall out of the polyhedron. In Figure 1, the bound of n171 to be used in verification, by observing the minimum and the maximum of all visited values {0,0.1,−0.1,…,0.6}, will be [−0.1,0.6] and shall be monitored in operation.

The rest of the paper is organized as follows. Section 2 presents the required definitions as well as the workflow for verification. Section 3 discusses extensions to a statistical setup when the input property characterizer is not perfect. Lastly, we summarize related work in Section 4 and conclude with our preliminary evaluation in Section 5.

Let {In}ϕ⊆Rd0 be the set of inputs of a neural network that satisfies the property ϕ. We assume that both ϕ and {In}ϕ are unknown (e.g., the road is bending left in an image), but there exists an oracle (e.g., human) that can answer for a given input {in}∈Rd0, whether {in}∈{In}ϕ.

can be done by training a neural network as a binary classifier, with

The safety verification problem asks if there exists an input {in}∈{In}ϕ such that f(L)({in}) satisfies ψ, where the risk condition ψ is a conjunction of linear inequalities over the output of the neural network. If no such input in exists, we say that the neural network is safe under the input constraint ϕ and the output risk constraint ψ.

When Assumption 1 holds, for safety verification it is equivalent to ask whether there exists an input {in}∈Rd0 such that hϕl(f(l)({in}))={1} and f(L)({in}) satisfies ψ. From now on, unless explicitly specified, we consider only situations where Assumption 1 holds.

Abstraction by omitting neurons before the l-th layer.

The following result states that one can retain soundness for safety verification, by considering all possible neuron values that can appear in the l-th layer.

Obviously, the use of Rdl in Lemma 1 is overly conservative, and we can strengthen Lemma 1 without losing soundness, if we find S⊆Rdl which guarantees that f(l)({in})∈S for every input {in}∈Rd0 of the network. Obtaining such a set S can be achieved by abstract interpretation techniques [6, 20] which perform symbolic reasoning over the neural network in a layer-wise manner.

If using ~S is sufficient to prove safety and if for any input in, checking whether f(l)({in})∈~S can be computed efficiently, one can conditionally accept the proof by designing a run-time monitor which raises a warning that the assumption f(l)({in})∈~S used in the proof is violated. Admittedly, ~S can be an under-approximation over {f(l)({in})|{in}∈Rd0}, but practically creating an over-approximation only based on the training data is useful and can avoid unstructured input such as noise which is allowed when using Rd0.

The results in Section 2 are based on two assumptions of perfection, namely

One important question appears when the above two assumptions do not hold, meaning that it is possible for the input property characterizer to make mistakes. By considering all four possibilities in Table 1, one realizes that even when a safety proof is established by considering all inputs where hϕl(f(l)({in}))={1}

, there exists a probability

Formal verification of neural networks has drawn huge attention with many results available [13, 8, 3, 5, 9, 11, 6, 4, 1, 14, 19, 20]. Although specifications used in formal verification of neural networks are discussed in recent reviews [7, 15], the specification problem over images is not addressed, so research results largely use inherent properties of a neural network such as local robustness (as output invariance) or output ranges where one does not need to characterize properties for desired inputs. Not being able to properly characterizing input conditions (one possibility is to simply consider every input to be bounded by [−1,1]) makes it difficult for formal static analysis to achieve any useful results on deep perception networks, regardless of the type of abstraction domain being used (box, octagon, or zonotope). Lastly, our work is motivated by zero shot learning [12] which trains additional features apart from a standard neural network. The feature detector is commonly created by extending the network from close-to-output layers.

We have applied this methodology to examine a direct perception neural network developed by Audi. The network acts as a hot standby system and computes the next waypoint and orientation for autonomous vehicles to follow. As the close-to-output layers of the network are either ReLU or Batch Normalization, and as

ψ is a conjunction of linear constraints over output, it is feasible to use MILP-based approaches [3] as the underlying verification method. We developed a variation of nn-dependability-kit333https://github.com/dependable-ai/nn-dependability-kit/

to read models from tensorflow

In our experiment, we also found that for some input properties such as traffic participants in adjacent lanes, it is very difficult to construct the corresponding input property characterizers by taking neuron values from close-to-output layers (i.e., the trained classifier almost acts like fair coin flipping). Based on the theory of information bottleneck for neural networks [18, 16], a neural network from high dimensional input to low dimensional output naturally eliminates unrelated information in close-to-output layers. Therefore, the input property can be unrelated to the output of the network. Although we are unable to prove that the output of the network is safe under these input constraints, it should be possible to construct a counter example either by capturing more data or by using adversarial perturbation techniques [17, 10].

Overall, our initial result demonstrates the potential of using formal methods even on very complex neural networks, while it provides a clear path to engineers to resolve the problem related to how to characterize input conditions for verification (by also applying machine learning techniques). Our approach of looking at close-to-output layers can be viewed as an abstraction which can, in future work, leads to layer-wise incremental abstraction-refinement techniques. Although our practical motivation is to verify direct perception networks, the presented technique is equally applicable to any deep network for vision systems where input conditions are hard to characterize. It opens a new research direction of using learning to assist practical verification of learning systems.

The research work is supported by the following projects: “Audi Verifiable AI” from Audi AG, Germany and “Dependable AI for automotive systems” from DENSO Corporation, Japan.