Breast cancer is the most frequently reported cancer type among the women around the globe and beyond that it has the second highest female fatality rate among all cancer types. Despite all the progresses made in prevention and early intervention, early prognosis and survival prediction rates are still unsatisfactory. In this paper, we propose a novel type of perceptron called L-Perceptron which outperforms all the previous supervised learning methods by reaching 97.42 % and 98.73 % in terms of accuracy and sensitivity, respectively in Wisconsin Breast Cancer dataset. Experimental results on Haberman's Breast Cancer Survival dataset, show the superiority of proposed method by reaching 75.18 % and 83.86 % in terms of accuracy and F1 score, respectively. The results are the best reported ones obtained in 10-fold cross validation in absence of any preprocessing or feature selection. 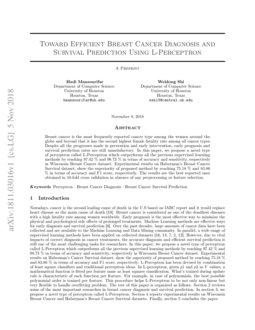 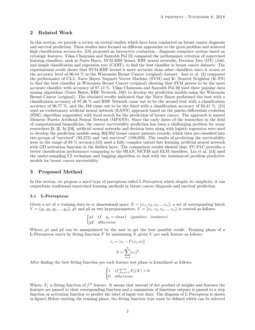 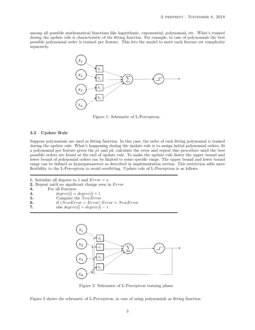 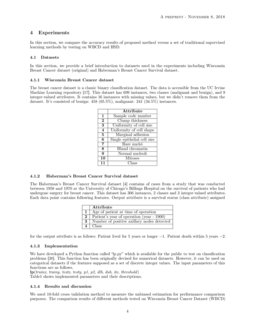 Nowadays, cancer is the second leading cause of death in the U.S based on IARC report and it would replace heart disease as the main cause of death [19]

. Breast cancer is considered as one of the deadliest diseases with a high fatality rate among women worldwide. Early prognosis is the most effective way to minimize the physical and psychological side effects of prolonged treatments. Machine Learning methods are effective ways for early diagnosis and survival prediction

[8]. Over the past decades, large amounts of cancer data have been collected and are available to the Machine Learning and Data Mining community. In parallel, a wide range of supervised learning methods have been applied on collected datasets [16, 13, 7, 2, 12]

. However, due to vital impacts of correct diagnosis in cancer treatments, the accurate diagnosis and efficient survival prediction is still one of the most challenging tasks for researchers. In this paper, we propose a novel type of perceptron called L-Perceptron which outperforms all the previous supervised learning methods by reaching 97.42 % and 98.73 % in terms of accuracy and sensitivity, respectively in Wisconsin Breast Cancer dataset. Experimental results on Haberman’s Cancer Survival dataset, show the superiority of proposed method by reaching 75.18 % and 83.86 % in terms of accuracy and F1 score, respectively. L-Perceptron has been devised by combination of least square classifiers and traditional perceptron ideas. In L-perceptron, given

p1 and p2 as Y values, a mathematical function is fitted per feature same as least squares classification. What’s trained during update rule is characteristic of each function per feature. For example, in case of polynomials, the best possible polynomial order is trained per feature. This procedure helps L-Perceptron to be not only non-linear but very flexible to handle overfitting problem. The rest of this paper is organized as follows. Section 2 reviews some of the most important researches in breast cancer diagnosis and survival prediction. In section 3, we propose a novel type of perceptron called L-Perceptron. Section 4 reports experimental results on Wisconsin Breast Cancer and Haberman’s Breast Cancer Survival datasets. Finally, section 5 concludes the paper.

In this section, we provide a review on several studies which have been conducted on breast cancer diagnosis and survival prediction. These studies have focused on different approaches to the given problem and achieved high classification accuracies. [18] proposed an interactive evaluation - diagnosis computer system based on cytologic features. Vikas Chaurasia and Saurabh Pal [5]

compared the performance criterion of supervised learning classifiers, such as Naive Bayes, SVM-RBF kernel, RBF neural networks, Decision Tree (DT) (J48), and simple classification and regression tree (CART), to find the best classifier in breast cancer datasets. The experimental result shows that SVM-RBF kernel is more accurate than other classifiers since it scores at the accuracy level of 96.84 % in the Wisconsin Breast Cancer (original) dataset. Asri et al.

compared the performance of C4.5, Naive Bayes, Support Vector Machine (SVM) and K- Nearest Neighbor (K-NN) to find the best classifier in Wisconsin Breast Cancer (original) showing that SVM proves to be the most accurate classifier with accuracy of 97.13 %. Vikas Chaurasia and Saurabh Pal

[6] used three popular data mining algorithms (Naive Bayes, RBF Network, J48) to develop the prediction models using the Wisconsin Breast Cancer (original). The obtained results indicated that the Naive Bayes performed the best with a classification accuracy of 97.36 % and RBF Network came out to be the second best with a classification accuracy of 96.77 %, and the J48 came out to be the third with a classification accuracy of 93.41 %. [11] used an evolutionary artificial neural network (EANN) approach based on the pareto-differential evolution (PDE) algorithm augmented with local search for the prediction of breast cancer. The approach is named Memetic Pareto Artificial Neural Network (MPANN). Since the early dates of the researches in the field of computational biomedicine, the cancer survivability prediction has been a challenging problem for many researchers [9, 3]. In [10]

, artificial neural networks and decision trees along with logistic regression were used to develop the prediction models using 202,932 breast cancer patients records, which then pre-classified into two groups of “survived” (93,273) and “not survived” (109,659). The results of predicting the survivability were in the range of 93 % accuracy.

[14] used the under-sampling C5 technique and bagging algorithm to deal with the imbalanced problem predictive models for breast cancer survivability.

In this section, we propose a novel type of perceptron called L-Perceptron which despite its simplicity, it can outperform traditional supervised learning methods in breast cancer diagnosis and survival prediction.

Where, p1 and p2 can be manipulated by the user to get the best possible result. Training phase of a L-Perceptron starts by fitting function F by minimizing S, given V per each feature as follows.

After finding the best fitting function per each feature test phase is formulized as follows.

Where, Fj is fitting function of jth feature. It means that instead of dot product of weights and features the features are passed to their corresponding function and a summation of functions outputs is passed to a step function or activation function to predict the label of input test data. The diagram of L-Perceptron is shown in figure1.Before starting the training phase, the fitting function type must be defined which can be selected among all possible mathematical functions like logarithmic, exponential, polynomial, etc. What’s trained during the update rule is characteristic of the fitting function. For example, in case of polynomials the best possible polynomial order is trained per feature. This lets the model to meet each feature set complexity separately.

Suppose polynomials are used as fitting function. In this case, the order of each fitting polynomial is trained during the update rule. What’s happening during the update rule is to assign initial polynomial orders, fit a polynomial per feature given the p1 and p2, calculate the error and repeat this procedure until the best possible orders are found at the end of update rule. To make the update rule faster the upper bound and lower bound of polynomial orders can be limited to some specific range. The upper bound and lower bound range can be defined as hyperparameters as described in implementation section. This restriction adds more flexibility to the L-Perceptron to avoid overfitting. Update rule of L-Perceptron is as follows.


Figure 2 shows the schematic of L-Perceptron, in case of using polynomials as fitting function.

In this section, we compare the accuracy results of proposed method versus a set of traditional supervised learning methods by testing on WBCD and HSD.

In this section, we provide a brief introduction to datasets used in the experiments including Wisconsin Breast Cancer dataset (original) and Haberman’s Breast Cancer Survival dataset.

The breast cancer dataset is a classic binary classification dataset. The data is accessible from the UC Irvine Machine Learning repository [17]. This dataset has 699 instances, two classes (malignant and benign), and 9 integer-valued attributes. It contains 16 instances with missing values, but we didn’t remove them from the dataset. It’s consisted of benign: 458 (65.5%), malignant: 241 (34.5%) instances.

The Haberman’s Breast Cancer Survival dataset [4] contains of cases from a study that was conducted between 1958 and 1970 at the University of Chicago’s Billings Hospital on the survival of patients who had undergone surgery for breast cancer. This dataset has 306 instances, 2 classes and 3 integer-valued attributes. Each data point contains following features.

We have developed a Python function called “lp.py” which is available for the public to test on classification problems [20]. This function has been originally devised for numerical datasets. However, it can be used on categorical datasets if the features supposed as a set of discrete integer values. The input parameters of this functions are as follows. lp(trainx, trainy, testx, testy, p1, p2, dlb, dub, ite, threshold) Table1 shows implemented parameters and their descriptions.

We used 10-fold cross validation method to measure the unbiased estimation for performance comparison purposes. The comparison results of different methods tested on Wisconsin Breast Cancer Dataset (WBCD) are presented in Table 2. Experimental results on Haberman’s Survival Dataset (HSD) have been tabulated on Table 3. Table 2 shows that L-Perceptron outperforms other methods in terms of accuracy and sensitivity based on experiments on WBCD. Naive Bayes is in the second rank by showing better results comparing to the rest of methods.

Table 3 shows that L-Perceptron outperforms other methods in terms of accuracy and F1 score based on experiments on HSD. When it comes to compare the methods based on specificity, L-Perceptron is at the second rank after MLP which shows best specificity result among all tested methods. Table 4 shows the initialized parameters including p1, p2 and fitting degree for each dataset.