We formalize an equivalence between two popular methods for Bayesian inference: Stein variational gradient descent (SVGD) and black-box variational inference (BBVI). In particular, we show that BBVI corresponds precisely to SVGD when the kernel is the neural tangent kernel. Furthermore, we interpret SVGD and BBVI as kernel gradient flows; we do this by leveraging the recent perspective that views SVGD as a gradient flow in the space of probability distributions and showing that BBVI naturally motivates a Riemannian structure on that space. We observe that kernel gradient flow also describes dynamics found in the training of generative adversarial networks (GANs). This work thereby unifies several existing techniques in variational inference and generative modeling and identifies the kernel as a fundamental object governing the behavior of these algorithms, motivating deeper analysis of its properties. 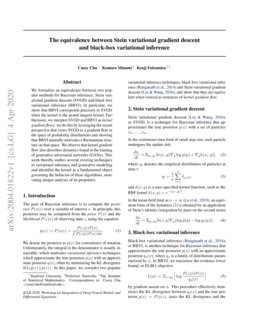 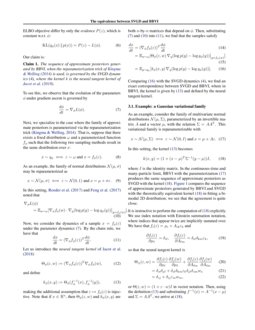 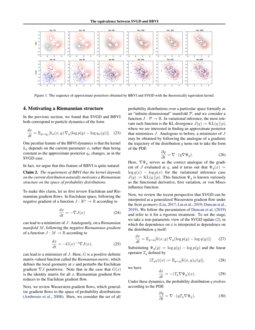 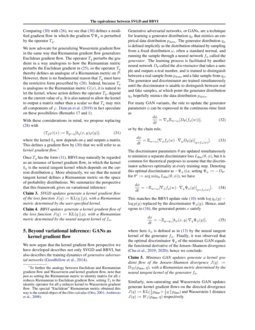 The goal of Bayesian inference is to compute the posterior P(x|z) over a variable of interest x. In principle, this posterior may be computed from the prior P(x) and the likelihood P(z|x) of observing data z, using the equation

Stein variational gradient descent (Liu and Wang, 2016), or SVGD, is a technique for Bayesian inference that approximates the true posterior p(x) with a set of particles x1,…,xn.

In the continuous-time limit of small step size, each particle undergoes the update rule

where qt denotes the empirical distribution of particles at time t:

In the mean-field limit as n→∞ (Lu et al., 2019), an equivalent form of the dynamics (2) is obtained by an application of Stein’s identity (integration by parts on the second term):

Black-box variational inference (Ranganath et al., 2014), or BBVI, is another technique for Bayesian inference that approximates the true posterior p(x) with an approximate posterior qϕ(x), where qϕ is a family of distributions parameterized by ϕ. In BBVI, we maximize the evidence lower bound, or ELBO, objective

by gradient ascent on ϕ. This procedure effectively minimizes the KL divergence between qϕ(x) and the true posterior p(x)=P(x|z), since the KL divergence and the ELBO objective differ by only the evidence P(z), which is constant w.r.t. ϕ:

The sequence of approximate posteriors generated by BBVI, when the reparameterization trick of Kingma and Welling (2014) is used, is governed by the SVGD dynamics (4), where the kernel k is the neural tangent kernel of Jacot et al. (2018).

To see this, we observe that the evolution of the parameters ϕ under gradient ascent is governed by

Next, we specialize to the case where the family of approximate posteriors is parameterized via the reparameterization trick (Kingma and Welling, 2014). That is, suppose that there exists a fixed distribution ω and a parameterized function fϕ such that the following two sampling methods result in the same distribution over x:

As an example, the family of normal distributions

N(μ,σ) may be reparameterized as

Now, we consider the dynamics of a sample x=fϕ(ε) under the parameter dynamics (7

). By the chain rule, we have that

making the additional assumption that ε↦fϕ(ε) is injective. Note that if x∈Rn, then Θϕ(ε,w) and kϕ(x,y) are both n-by-n matrices that depend on ϕ. Then, substituting (7) and (10) into (11), we find that the samples satisfy

Comparing (16) with the SVGD dynamics (4), we find an exact correspondence between SVGD and BBVI, where in BBVI, the kernel is given by (13) and defined by the neural tangent kernel.

As an example, consider the family of multivariate normal distributions N(μ,Σ)

, parameterized by an invertible matrix

μ, with the relation Σ=AAT. This variational family is reparameterizable with

In this setting, the kernel (13) becomes

is the identity matrix. In the continuous-time and many-particle limit, BBVI with the parameterization (

It is instructive to perform the computation of (18) explicitly. We use index notation with Einstein summation notation, where indices that appear twice are implicitly summed over. We have that fi(ε)=μi+Aikεk and

so that the neural tangent kernel is

In the previous section, we found that SVGD and BBVI both correspond to particle dynamics of the form

One peculiar feature of the BBVI dynamics is that the kernel kϕ depends on the current parameter ϕ, rather than being constant as the approximate posterior qϕ changes, as in the SVGD case.

In fact, we argue that this feature of BBVI is quite natural:

The requirement of BBVI that the kernel depends on the current distribution naturally motivates a Riemannian structure on the space of probability distributions.

To make this claim, let us first review Euclidean and Riemannian gradient flows. In Euclidean space, following the negative gradient of a function J:Rn→R according to

can lead to a minimizer of J. Analogously, on a Riemannian manifold M, following the negative Riemannian gradient of a function J:M→R according to

Next, we review Wasserstein gradient flows, which generalize gradient flows to the space of probability distributions (Ambrosio et al., 2008). Here, we consider the set of all probability distributions over a particular space formally as an “infinite-dimensional” manifold P, and we consider a function J:P→R. In variational inference, the most relevant such function is the KL divergence J(q):=KL(q∥p), where we are interested in finding an approximate posterior that minimizes J. Analogous to before, a minimizer of J may be obtained by following the analogue of a gradient; the trajectory of the distribution q turns out to take the form of the PDE

Here, ∇Ψq serves as the correct analogue of the gradient of J evaluated at q, and it turns out that Ψq(x)=logq(x)−logp(x) for the variational inference case J(q):=KL(q∥p). This function Ψq is known variously as the functional derivative, first variation, or von Mises influence function.

Now, we review the recent perspective that SVGD can be interpreted as a generalized Wasserstein gradient flow under the Stein geometry (Liu, 2017; Liu et al., 2019; Duncan et al., 2019). We follow the presentation of Duncan et al. (2019) and refer to it for a rigorous treatment. To set the stage, we take a non-parametric view of the SVGD update (2), in which the dependence on ϕ is interpreted as dependence on the distribution q itself:

Under these dynamics, the probability distribution q evolves according to the PDE

Comparing (30) with (26), we see that (30) defines a modified gradient flow in which the gradient ∇Ψq is perturbed by the operator Tq.

We now advocate for generalizing Wasserstein gradient flow in the same way that Riemannian gradient flow generalizes Euclidean gradient flow. The operator Tq perturbs the gradient in a way analogous to how the Riemannian metric perturbs the Euclidean gradient in (25), so the operator Tq thereby defines an analogue of a Riemannian metric on P. However, there is no fundamental reason that Tq must have the restrictive form prescribed by (28). Indeed, because Tq is analogous to the Riemannian metric G(x), it is natural to let the kernel, whose action defines the operator Tq, depend on the current value of q. It is also natural to allow the kernel to output a matrix rather than a scalar so that Tq may mix all components of φ. Duncan et al. (2019) in fact speculate on these possibilities (Remarks 17 and 1).

With these considerations in mind, we propose replacing (28) with

Once Tq has the form (31), BBVI may naturally be regarded as an instance of kernel gradient flow, in which the kernel kq is the neural tangent kernel which depends on the current distribution q. More abstractly, we see that the neural tangent kernel defines a Riemannian metric on the space of probability distributions. We summarize the perspective that this framework gives on variational inference:

J(q):=KL(q∥p), with a Riemannian metric determined by the user-specified kernel.

BBVI updates generate a kernel gradient flow of the loss function J(q):=KL(q∥p), with a Riemannian metric determined by the neural tangent kernel of fϕ.

We now argue that the kernel gradient flow perspective we have developed describes not only SVGD and BBVI, but also describes the training dynamics of generative adversarial networks (Goodfellow et al., 2014).

, often a standard normal, and running the sample through a neural network

For many GAN variants, the rule to update the generator parameters ϕ can be expressed in the continuous-time limit as

or by the chain rule,

This matches the BBVI update rule (10) with logqϕ(y)−logp(y) replaced by the discriminator Ψϕ(y). Hence, analogous to (16), the generated points x satisfy

where here kϕ is defined as in (13) by the neural tangent kernel of the generator fϕ. Finally, it was observed that the optimal discriminator Ψq of the minimax GAN equals the functional derivative of the Jensen–Shannon divergence (Chu et al., 2019, 2020); hence we conclude:

Minimax GAN updates generate a kernel gradient flow of the Jensen–Shannon divergence J(q):=DJS(pdata,q), with a Riemannian metric determined by the neural tangent kernel of the generator fϕ.

We have cast SVGD and BBVI, as well as the dynamics of GANs, into the same theoretical framework of kernel gradient flow, thus identifying an area ripe for further study.