Markov chain Monte Carlo (MCMC) is widely regarded as one of the most important algorithms of the 20th century. Its guarantees of asymptotic convergence, stability, and estimator-variance bounds using only unnormalized probability functions make it indispensable to probabilistic programming. In this paper, we introduce the TensorFlow Probability MCMC toolkit, and discuss some of the considerations that motivated its design. 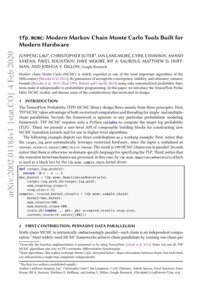 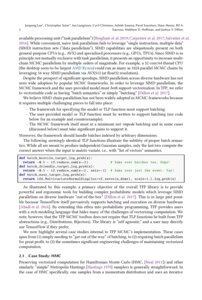 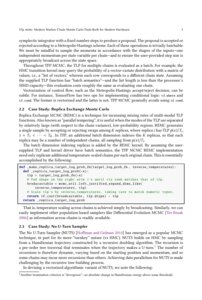 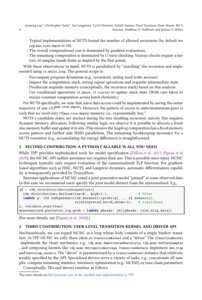 No Free Lunch for Approximate MCMC

Is There an Analog of Nesterov Acceleration for MCMC?

A new methodology is presented for the construction of control variates ...
Nicolas Brosse, et al. ∙

callable to compute the target log probability (TLP)111Generally the function implementation is presumed to be using TensorFlow (Abadi et al., 2016). Some, but not all, TFP MCMC algorithms also rely on TF’s automatic differentiation functionality.. Third, we present a user-level API of composable building blocks for constructing new MCMC transition kernels and for use in higher-level algorithms.

The following example depicts our three contributions as a working example. First, notice that the target_log_prob automatically leverages vectorized hardware., since the input x, initialized as current_state=tf.zeros([100]) is a tf.Tensor. The result is 100 MCMC chains run in parallel. Second, notice that there is otherwise no domain-specific language for specifying the TLP. Third, notice that the transition kernel mechanics are governed, in this case, by tfp.mcmc.HamiltonianMonteCarlo which is used as a black box by the tfp.mcmc.sample_chain kernel driver.

Despite the prospect of significant speedups, SIMD parallelism across diverse hardware has not seen wide adoption by popular MCMC frameworks. In order to leverage SIMD parallelism, the MCMC framework and the user-provided model must both support vectorization. In TFP, we refer to vectorizable code as having “batch semantics” or simply “batching” (Dillon et al., 2017).

We believe SIMD chain parallelism has not been widely adopted in MCMC frameworks because it requires multiple challenging pieces to fall into place:

Moreover, the framework should handle batches indexed by arbitrary dimensions.

The following seemingly identical TLP functions illustrate the subtlety of proper batch semantics. While all are meant to produce independent Gaussian samples, only the last two compute the correct answer when the input is matrix-variate, i.e., with “list of vectors” semantics.

As illustrated by this example, a primary objective of the overall TFP library is to provide powerful and ergonomic tools for building complex probabilistic models which leverage SIMD parallelism on diverse hardware “out-of-the-box” (Dillon et al., 2017). This is in large part possible because TensorFlow itself pervasively supports batching and execution on diverse hardware (Abadi et al., 2016). By extending this ethos into probabilistic programming, TFP provides users with a rich modeling language that hides many of the challenges of vectorizing computation. We note, however, that the TFP MCMC toolbox does not require that TLP functions be built from TFP abstractions (e.g., Distributions, Bijectors). The library is “self agnostic,” and a user may directly use TensorFlow if they prefer.

We now highlight several case studies internal to TFP MCMC’s implementation. These cases span from (1) simply needing to “get out of the way” of batching, to (2) requiring batch parallelism for great profit, to (3) the sometimes significant engineering challenges of maintaining vectorized computation.

Preserving vectorized computation for Hamiltonian Monte Carlo (HMC, (Neal, 2011)) and other similarly “simple” Metropolis-Hastings (Hastings, 1970) samplers is generally straightforward. In the case of HMC specifically, one samples from a momentum distribution and uses an iterative symplectic integrator with a fixed number steps to produce a proposal. The proposal is accepted or rejected according to a Metropolis-Hastings scheme. Each of these operations is trivially batchable. We must be mindful to sample the momenta in accordance with the shapes of the inputs—one independent momentum per state variable per chain—and to ensure the user-provided step size is appropriately broadcast across the state space.

Throughout TFP MCMC, the TLP for multiple chains is evaluated as a batch. For example, the HMC transition kernel may query the probability of a vector-variate distribution with a matrix of values, i.e., a “list of vectors,” wherein each row corresponds to a different chain state. Assuming the supplied TLP function has “batch semantics”—and the list length is less than the processor’s SIMD capacity—this evaluation costs roughly the same as evaluating one chain.

Vectorization of control flow, such as the Metropolis-Hastings accept/reject decision, can be subtle. For instance, TensorFlow has two ops for implementing conditional logic: tf.where and tf.cond. The former is vectorized and the latter is not. TFP MCMC generally avoids using tf.cond.

Replica Exchange MCMC (REMC) is a technique for increasing mixing rates of multi-modal TLP functions. Also known as “parallel tempering”, it is useful when the modes of the TLP are separated by relatively large (with respect to the chain variance), low-probability regions. REMC generates a single sample by accepting or rejecting swaps among K replicas, where replica i has TLP p(x)/Ti, 1=T1<⋯<TK. In TFP, an additional batch dimension indexes the K replicas, so that each replica may be a number of independent chains, all sampling from p(x)/Ti.

The batch dimension indexing replicas is added by the REMC kernel. By assuming the user-supplied TLP and kernel driver have batch semantics, the TFP MCMC REMC implementation need only replicate additional temperature-scaled chains per each original chain. This is essentially accomplished by the following:

That is, temperature scaling across chains is achieved simply by broadcasting. Similarly, we can easily implement other population-based samplers like Differential Evolution MCMC (Ter Braak, 2006) as information across chains is readily available.

The No U-Turn Sampler (NUTS) (Hoffman and Gelman, 2014) has emerged as a popular MCMC technique, in part for its more-“turnkey” nature (vs HMC). NUTS builds on HMC by sampling from a Hamiltonian trajectory constructed by a recursive doubling algorithm. The recursion is a pre-order tree traversal that terminates when the trajectory makes a U-turn.333Another termination criterion is “divergence”—an absolute change in Hamiltonian energy above some threshold. The number of recursions is therefore dynamic, varying based on the starting position and momentum, and so some chains may incur more recursions than others. Achieving data parallelism for NUTS is made challenging by the recursive tree-building process.

In devising a vectorized algorithmic variant of NUTS, we note the following:

With these observations in mind, NUTS is parallelized by “unrolling” the recursion and implemented using tf.while_loop. The general recipe is:

NUTS’s candidate states are stacked during the tree doubling recursion; naively this requires dynamic memory allocation. Following similar logic, we observe it is possible to allocate a fixed-size memory buffer and update it in situ. This ensures the leapfrog computation has a fixed memory access pattern and further aids SIMD parallelism. The remaining bookkeeping necessary for a NUTS transition (e.g., accumulating the energy difference) is straightforward.

3. Second Contribution: A Python Callable Is All You Need

While TFP provides sophisticated tools for model specification (Dillon et al., 2017; Piponi et al., 2020), the MCMC API neither presumes nor requires their use. This is possible since many MCMC techniques typically only require evaluation of the (unnormalized) TLP function. For gradient-based algorithms such as HMC, NUTS, and Langevin dynamics, automatic differentiation capability is transparently provided by TensorFlow.

Bayesian applications of MCMC entail a joint generative model “pinned” at some observed data. In this case we recommend users specify the joint model distinct from the unnormalized. E.g.,

Mechanistically, we can regard MCMC as a loop whose body consists of a single Markov transition. In TFP MCMC we reify these ideas as TransitionKernel and a “driver.” The TransitionKernel implements the chain mechanics, e.g., tfp.mcmc.HamiltonianMonteCarlo, tfp.mcmc.NoUTurnSampler, and composing kernels like tfp.mcmc.MetropolisHastings. TransitionKernels implement one_step and bootstrap_results. The “driver” is parameterized by a TransitionKernel instance that relatively weakly specified by the API. Specialized drivers serve a variety of tasks, e.g., concatenate all samples, compute streaming statistics, interleave optimization (e.g., MCEM), or tune chain parameters.

Per requirements of tf.while_loop, TransitionKernel “side_results” must be enumerable via tf.nest, itself supporting tuple, list, dict, and recursive combinations thereof. The containing structure and per-element dtypes of bootstrap_results must match that which is returned by one_step. Side-effects in one_step are not permitted; all state must be represented by either the chain state (results[-1]) or the side_results.

The TransitionKernel class encapsulates the computation of a single state transition in a Markov chain, as well as an initial “bootstrap” operation. These methods are called one_step and bootstrap_results, respectively.

The main work of the TransitionKernel is to generate a new chain state from an existing one. We typically also need to keep track of additional kernel-specific states, for example the Metropolis-Hastings accept/reject outcome (for diagnostics) or the previous TLP and its gradients (to avoid costly recomputation). The work of advancing the chain state is done by the one_step method, which requires two arguments: (1) the chain state, a Tensor or a list-like collection of Tensors, and (2) the kernel state, typically a (nested) namedtuple of Tensors. The output of one_step is a pair of new chain state and kernel state. As noted above, the nature of TF loops demands these inputs and outputs have identical structure.

The composable design of one_step—required by the TF loop API—means we can naturally build up more complicated transition operations by nesting TransitionKernels. For example, MCMC samplers that include a Metropolis-Hastings accept/reject step can be composed by nesting the MetropolisHastings kernel with an “uncalibrated” transitional kernel:

An especially powerful example of this pattern is the TransformedTransitionKernel, which employs Bijectors (Dillon et al., 2017) to transparently apply smooth, volume-tracking reparameterizations of the chain state space. Such reparameterizations are essential to algorithms like HMC, which must operate in an unconstrained space, but can also be used for preconditioning the state space to improve sampling efficiency (Hoffman et al., 2019).

At its simplest, a TFP MCMC driver is a Python function that iteratively invokes a Markov transition operation and returns one or more intermediate iteration values. To leverage TensorFlow’s XLA compiler, low-level optimizations, and hardware acceleration, TFP drivers rely on tf.while_loop and derivatives tf.scan, tf.map_fn.

Future plans include drivers for computing streaming expectations—useful, e.g., when the number of state variables is so large that storing a full trace becomes impractical—as well as “multi-kernel” drivers which allow sequential composition of distinct TransitionKernels

. The latter would, for instance, enable more sophisticated hyperparameter adaptation phases before burnin and sampling.

To the best of our knowledge, TFP MCMC is the first general purpose library for constructing MCMC algorithms, and making no strong demands on the user’s choice of model specification framework, other than the choice of numerical library (TensorFlow) 555Work is actively underway to enable TFP to be used seamlessly with alternate numerical backends, currently NumPy and JAX. Some examples of more specialized libraries which do use data parallelism include emcee (Foreman-Mackey et al., 2013)) and elfi (Lintusaari et al., 2017)). Additionally, NumPyro (Phan and Pradhan, 2019) implements an iterative NUTS variant (similar in spirit to TFP’s, although the two developed independently), which is amenable to JAX’s program transformations, including JIT compilation (@jit) and vectorizaiton via @vmap.

The availability of massively multi-chain MCMC provides new opportunities. For example, running many parallel chains may enable adaptive MCMC techniques to achieve faster convergence and lower bias, or allow for low-variance estimates with relatively short chains. Separately, one typically computes convergence criteria like potential scale reduction (R-hat (Vehtari et al., 2019)) and effective sample size (Geyer, 2011; Gelman et al., 2013) to monitor the convergence of the chains. But the estimators that underlie these diagnostics require relatively long chains, which blunts the advantage of running many chains. Further research is needed to derive new tools and workflows that fully exploit the potential of many-chain MCMC.

We would like to acknowledge contributions to the TFP library from Karl Millar, Alexey Radul, Brian Patton, Srinivas Vasudevan, Danielle Kaminski, Jasper Snoek, Sebastian Nowozin, and the TFP Team. We also thank Alexey Radul and Ashok Popat for their review of this work.