With the rapid development of Natural Language Processing (NLP) technologies, text steganography methods have been significantly innovated recently, which poses a great threat to cybersecurity. In this paper, we propose a novel attentional LSTM-CNN model to tackle the text steganalysis problem. The proposed method firstly maps words into semantic space for better exploitation of the semantic feature in texts and then utilizes a combination of Convolutional Neural Networks (CNNs) and Long Short-Term Memory (LSTM) recurrent neural networks to capture both local and long-distance contextual information in steganography texts. In addition, we apply attention mechanism to recognize and attend to important clues within suspicious sentences. After merge feature clues from Convolutional Neural Networks (CNNs) and Recurrent Neural Networks (RNNs), we use a softmax layer to categorize the input text as cover or stego. Experiments showed that our model can achieve the state-of-art result in the text steganalysis task. 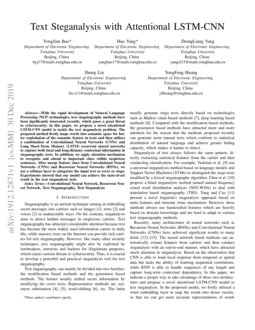 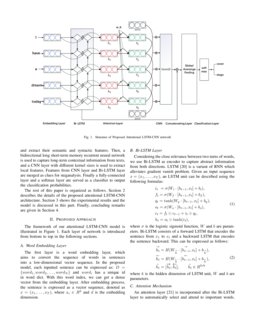 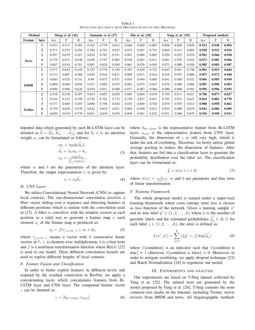 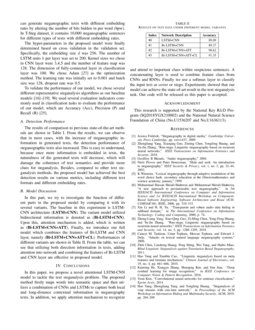 Steganography is an ancient technique aiming at embedding secret messages into carriers such as images [5], texts [25] and voices [14] in undetectable ways. On the contrary, steganalysis aims to detect hidden messages in suspicious carriers. Text steganography has attracted considerable attention because text has become the most widely used information carrier in daily life, while massive texts on the Internet can provide rich carriers for text steganography. However, like many other security techniques, text steganography might also be exploited by lawbreakers, terrorists and hackers for illegitimate purposes, which causes serious threats to cybersecurity. Thus, it is crucial to develop a powerful and practical steganalysis tool for text steganography.

Text steganography can mainly be divided into two families: the modification based methods and the generation based methods. The former usually embed secret information by modifying the cover texts. Representative methods are synonym substitution [13], [20], word-shifting [16]

, etc. The latter usually generate stego texts directly based on technologies such as Markov chain based methods

[24]. Compared with the modification based methods, the generation based methods have attracted more and more attention for the reason that the methods proposed recently can generate more natural texts which conform to statistical distribution of natural language and achieve greater hiding capacity, which makes it harder to detect.

use a universal steganalysis method based on language models and Support Vector Machines (SVMs) to distinguish the stego texts modified by a lexical steganography algorithm. Chen et al.

[2] propose a blind steganalytic method named natural frequency zoned word distribution analysis (NFZ-WDA) to deal with translation based steganography (TBS). Yang and Cao [21] present a novel linguistics steganalysis approach based on meta features and immune clone mechanism. However, these methods always use handcrafted features which are heavily based on domain knowledge and are hard to adapt to various text steganography methods.

Recently, many architectures of neural networks such as Recurrent Neural Networks (RNNs) and Convolutional Neural Networks (CNNs) have achieved significant results in many fields [6, 10, 23, 22]

. The neural network based methods can automatically extract features from carriers and then conduct steganalysis with an end-to-end manner, which have attracted much attention in steganalysis. Based on the observation that CNN is able to learn local response from temporal or spatial data but lacks the ability of learning sequential correlations, while RNN is able to handle sequences of any length and capture long-term contextual dependency. In this paper, we indicate a proper way to take advantage of these two architectures and propose a novel attentional LSTM-CNN model to text steganalysis. In the proposed model, we firstly utilized a word embedding layer to map the words into dense vectors, so that we can get more accurate representations of words and extract their semantic and syntactic features. Then, a bidirectional long short-term memory recurrent neural network is used to capture long-term contextual information from texts, and a CNN layer with different kernel sizes is used to extract local features. Features from CNN layer and Bi-LSTM layer are merged as clues for steganalysis. Finally a fully-connected layer and a softmax layer are served as a classifier to output the classification probabilities.

The rest of this paper is organized as follows. Section 2 describes the details of the proposed attentional LSTM-CNN architecture. Section 3 shows the experimental results and the model is discussed in this part. Finally, concluding remarks are given in Section 4.

The framework of our attentional LSTM-CNN model is illustrated in Figure 1. Each layer of network is introduced from bottom to top in the following sections.

The first layer is a word embedding layer, which aims to convert the sequence of words in sentences into a low-dimensional vector sequence. In the proposed model, each inputted sentence can be expressed as: D={word1,word2,…,wordN} and wordi has a unique id in word dict. With this word index, we can get a dense vector from the embedding layer. After embedding process, the sentence is expressed as a vector sequence, denoted as x=(x1,…,xT), where xi∈Rd and d is the embedding dimension.

Considering the close relevance between two turns of words, we use Bi-LSTM as encoder to capture abstract information from both directions. LSTM [8] is a variant of RNN which alleviates gradient vanish problem. Given an input sequence x=(x1,…,xT), an LSTM unit can be described using the following formulas:

is the logistic sigmoid function,

where k is the hidden dimension of LSTM unit, W and b are parameters.

An attention layer [19] is incorporated after the Bi-LSTM layer to automatically select and attend to important words. Inputted data which generated by each Bi-LSTM layer can be denoted as ˜h=[˜h1,˜h2,…,˜hj], and for hi∈h, its attention weight αi can be formulated as follows:

where w and b are the parameters of the attention layer. Therefore, the output representation ri is given by:

We utilize Convolutional Neural Network (CNN) to capture local contexts. The one-dimensional convolution involves a filter vector sliding over a sequence and detecting features at different positions which is similar with the convolution used in [10]. A filter m convolves with the window vectors at each position in a valid way to generate a feature map s, each element sj of the feature map is produced as:

where rj:j+k−1 means a vector with k consecutive frame vectors in ˜r, ⊙ is element-wise multiplication, b is a bias term and f

is a nonlinear transformation function where ReLU

[7] is used in our model. Three different convolution kernels are used to exploit different lengths of local contexts.

In order to better exploit features in different levels and inspired by the residual connection in ResNet, we apply a concatenating layer, which concatenates features from Bi-LSTM layer and CNN layer. The compound feature vector

z can be denoted as:

is still very high, which is under the risk of overfitting. Therefore, we firstly utilize global average pooling to reduce the dimension of features. After that, features are fed into a classification layer to generate the probability distribution over the label set. The classification layer can be formulated as:

are parameter and bias term of linear transformation.

The whole proposed model is trained under a supervised learning framework where cross entropy error loss is chosen as loss function of the network. Given a training sample

is the number of possible labels and the estimated probabilities

[9] to regularize our model.

Our experiments are based on T-Steg dataset collected by Yang et al. [27]. The natural texts are generated by the model proposed by Fang et al. [4]. T-Steg contains the most common text media on the Internet, including Twitter, movie reviews from IMDB and news. All steganographic methods can generate steganographic texts with different embedding rates by altering the number of bits hidden in per word (bpw). In T-Steg dataset, it contains 10,000 steganographic sentences for different types of texts with different embedding rates.

The hyper-parameters in the proposed model were finally determined based on cross validation in the validation set. Specifically, the embedding size d was 256. The number of LSTM units k per layer was set to 200. Kernel sizes we chose in CNN layer were 3,4,5 and the number of feature map was 128. The dimension of fully-connected layer in classification layer was 100. We chose Adam [1] as the optimization method. The learning rate was initially set to 0.001 and batch size was 128, dropout rate was 0.5.

The results of comparison to previous state-of-the-art methods are shown in Table I. From the results, we can observe that in most cases, with the increase of steganographic information in generated texts, the detection performance of steganographic texts also increased. This is easy to understand, because once more information is embedded in texts, the naturalness of the generated texts will decrease, which will damage the coherence of text semantics and provide more clues for steganalysis. Besides, compared to other text steganalysis methods, the proposed model has achieved the best detection results on various metrics, including different text formats and different embedding rates.

In this part, we try to investigate the function of different parts in the proposed model by comparing it with its several variants. The baseline in this experiment is LSTM-CNN architecture (LSTM+CNN). The variant model utilized bidirectional information is denoted as (Bi-LSTM+CNN). Upon this, attention mechanism is added, which is written as (Bi-LSTM+CNN+ATT). Finally, we introduce our full model which combines the features of Bi-LSTM and CNN layer, namely (Bi-LSTM+CNN+ATT+CL). Performances of different variants are shown in Table II. From the table, we can see that utilizing both direction information in texts, adding attention into network and combining the features of Bi-LSTM and CNN layer are effective in proposed model.

In this paper, we propose a novel attentional LSTM-CNN model to tackle the text steganalysis problem. The proposed method firstly maps words into semantic space and then utilizes a combination of CNNs and LSTMs to capture both local and long-distance contextual information in steganography texts. In addition, we apply attention mechanism to recognize and attend to important clues within suspicious sentences. A concatenating layer is used to combine feature clues from CNNs and RNNs. Finally we use a softmax layer to classify the input text as cover or stego. Experiments showed that our model can achieve the state-of-art result in the text steganalysis task. Our code will be released as this paper is accepted.