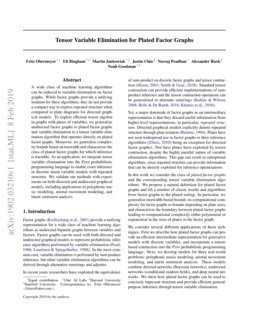 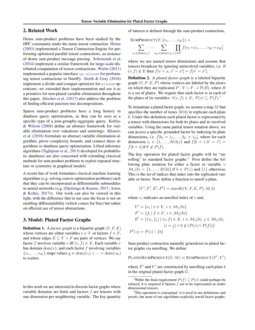 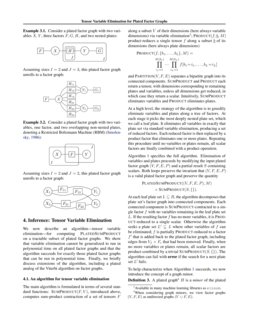 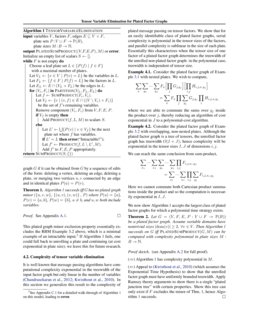 Yet, a major downside of factor graphs as an intermediary representation is that they discard useful information from higher-level representations, in particular, repeated structure. Directed graphical models explicitly denote repeated structure through plate notation (Buntine, 1994). Plates have not seen widespread use in factor graphs or their inference algorithms ((Dietz, 2010) being an exception for directed factor graphs). Nor have plates been exploited by tensor contraction, despite the highly parallel nature of variable elimination algorithms. This gap can result in suboptimal algorithms, since repeated structure can provide information that can be directly exploited for inference optimizations.

We consider several different applications of these techniques. First we describe how plated factor graphs can provide an efficient intermediate representation for generative models with discrete variables, and incorporate a tensor-based contraction into the Pyro

Sparse sum-product problems have a long history in database query optimization, as they can be seen as a specific type of a join-groupby-aggregate query. Kohlas & Wilson (2008) define an abstract framework for variable elimination over valuations and semirings. Khamis et al. (2016) formulate an abstract variable elimination algorithm, prove complexity bounds, and connect these algorithms to database query optimization. Lifted inference algorithms (Taghipour et al., 2013) developed for probabilistic databases are also concerned with extending classical methods for sum-product problems to exploit repeated structure or symmetry in graphical models.

A recent line of work formulates classical machine learning algorithms (e.g. solving convex optimization problems) such that they can be incorporated as differentiable submodules in neural networks (e.g. (Djolonga & Krause, 2017; Amos & Kolter, 2017)). Our work can also be viewed in this light, with the difference that in our case the focus is not on enabling differentiability (which comes for free) but rather on efficient use of tensor abstractions.

A factor graph is a bipartite graph (V,F,E) whose vertices are either variables v∈V or factors f∈F, and whose edges E⊆V×F are pairs of vertices. We say factor f involves variable v iff (v,f)∈E. Each variable v has domain dom(v), and each factor f involving variables {v1,…,vK} maps values x––∈dom(v1)×⋅⋅⋅×dom(vK) to scalars.

In this work we are interested in discrete factor graphs where variable domains are finite and factors f are tensors with one dimension per neighboring variable. The key quantity of interest is defined through the sum-product contraction,

where we use named tensor dimensions and assume that tensors broadcast by ignoring uninvolved variables, i.e. if (v,f)∉E then f[v=x,v′=x′]=f[v′=x′].

A plated factor graph is a labeled bipartite graph (V,F,E,P) whose vertices are labeled by the plates on which they are replicated P:V∪F→P(B), where B is a set of plates. We require that each factor is in each of the plates of its variables: ∀(v,f)∈E,P(v)⊆P(f).111While the final requirement P(f)⊇P(v) could perhaps be relaxed, it is required if factors f are to be represented as multi-dimensional tensors.

To instantiate a plated factor graph, we assume a map M that specifies the number of times M(b) to replicate each plate b. Under this definition each plated factor is represented by a tensor with dimensions for both its plates and its involved variables. Using the same partial tensor notation above, we can access a specific grounded factor by indexing its plate dimensions, i.e. f[b1=i1,…,bL=iL], where for each dimension il∈{1,…,M(bl)} and f[b=i,b′=i′]=f[b=i] if b′∉P(f).

The key operation for plated factor graphs will be “unrolling” to standard factor graphs.222This operation is conceptual: it is used in our definitions and proofs, but none of our algorithms explicitly unroll factor graphs. First define the following plate notation for either a factor or variable z: Mz(b)={1,…,M(b)} if b∈P(z) and {1} otherwise. This is the set of indices that index into the replicated variable or factor. Now define a function to unroll a plate,

where vi indicates an unrolled index of v and,

where F′ and V′ are constructed by unrolling each plate b in the original plated factor graph G.

4.1 An algorithm for tensor variable elimination

At a high level, the strategy of the algorithm is to greedily eliminate variables and plates along a tree of factors. At each stage it picks the most deeply nested plate set, which we call a leaf plate. It eliminates all variables in exactly that plate set via standard variable elimination, producing a set of reduced factors. Each reduced factor is then replaced by a product factor that eliminates one or more plates. Repeating this procedure until no variables or plates remain, all scalar factors are finally combined with a product operation.

At each leaf plate set L⊆B, the algorithm decomposes that plate set’s factor graph into connected components. Each connected component is SumProduct-contracted to a single factor f with no variables remaining in the leaf plate set L. If the resulting factor f has no more variables, it is Product-reduced to a single scalar. Otherwise the algorithm seeks a plate set L′⊊L where other variables of f can be eliminated; f is partially Product-reduced to a factor f′ that is added back to the plated factor graph, including edges from Vf×Fc that had been removed. Finally, when no more variables or plates remain, all scalar factors are product-combined by a trivial \textscSumProduct(S,{}). The algorithm can fail with error if the search for a next plate set L′ fails.

To help characterize when Algorithm 1 succeeds, we now introduce the concept of a graph minor.

A plated graph444When considering graph minors, we view factor graphs (V,F,E) as undirected graphs (V∪F,E). H is a minor of the plated graph G if it can be obtained from G by a sequence of edits of the form: deleting a vertex, deleting an edge, deleting a plate, or merging two vertices u,v connected by an edge and in identical plates P(u)=P(v).

This plated graph minor exclusion property essentially excludes the RBM Example 3.2 above, which is a minimal example of an intractable input.555See Appendix C.1 for a detailed walk-through of Algorithm 1 on this model, leading to error. If Algorithm 1 fails, one could fall back to unrolling a plate and continuing (at cost exponential in plate size); we leave this for future research.

Consider the plated factor graph of Example 3.1 with nested plates. We wish to compute,

where we are able to commute the sums over yj inside the product over j, thereby reducing an algorithm of cost exponential in J to a polynomial-cost algorithm.

We can reach the same conclusion from sum-product,

Here we cannot commute both Cartesian product summations inside the product and so the computation is necessarily exponential in I,J.

We now show Algorithm 1 accepts the largest class of plated factor graphs for which a polynomial time strategy exists.

(see Appendix A.2 for full proof).

(⇐) Appeal to (Kwisthout et al., 2010) (which assumes the Exponential Time Hypothesis) to show that the unrolled factor graph must have uniformly bounded treewidth. Apply Ramsey theory arguments to show there is a single “plated junction tree” with certain properties. Show this tree can only exist if F excludes the minor of Thm. 1, hence Algorithm 1 succeeds. ∎

When a plated factor graph is asymptotically tractable according to Thm. 2, it is also tractable on a parallel machine.

If Algorithm 1 runs in sequential time T when M=1, then it runs in time T+O(ΣblogM(b)) on a parallel machine with ΠbM(b) processors and perfect efficiency.

Algorithm 1 depends on M only through calls to SumProduct and Product. SumProduct operates independently over plates, and hence parallelizes with perfect efficiency. Product reductions over each plate b incur only O(logM(b)) time on a parallel machine. ∎

This result suggests that (tractable) plated factor graphs are a practical model class for modern hardware. See Sec. 6.4 for empirical verification of the computational complexity described in Thm. 3.

is spent on constructing a junction tree. By exploiting repeated structure, tensor variable elimination can restrict its junction tree problems to much smaller factor graphs (constructed locally for each connected component of each plate set), leading to lower overhead and the opportunity to apply better heuristics.

666E.g. opt_einsum uses an optimal strategy for factor graphs with up to four variables.

Further extensions can be efficiently formulated as adjoint algorithms, which proceed by recording an adjoint compute graph alongside the forward computation and then traversing the adjoint graph backwards starting from the final result of the forward computation (Darwiche, 2003; Eisner, 2016; Azuma et al., 2017; Belle & De Raedt, 2016)

Plated factor graphs provide a general-purpose intermediate representation for many applications in probabilistic modeling requiring efficient inference and easy parallelization. To make tensor variable elimination broadly usable for these applications, we integrate it into two frameworks888Open-source implementations are available; see http://docs.pyro.ai/en/dev/ops.html and use both frameworks in our experiments.

First we integrate our implementation into the Pyro probabilistic programming language (Bingham et al., 2018). This allows us to specify discrete latent variable models easily, programmatically constructing complex distributions and explicitly indicating repeated structure. The syntax relies on a plate context manager.999We also introduce a markov context manager to deal with markov structure. Inside these plates, sample statements are batched and assumed to be conditionally independent along the plate dimension.

The directed graphical model in Fig. 1 (left) can be specified by the Pyro program

To extract plated factor graphs from such programs without using static analysis, we use a nonstandard interpretation of Pyro sample statements (Wingate et al., 2011)

as vectorized enumeration over each distribution’s support. That is, when running a program forward we create a tensor at each sample site that lists all possible values of each distribution rather than draw random samples. To avoid conflict among multiple enumerated variables, we dynamically assign each variable a distinct tensor dimension along which its values are enumerated, relying on array broadcasting

(Walt et al., 2011) to correctly combine results of multiple nonstandard sample values (as in Pz[x,y] above).

A standard interface for expressing inference in undirected graphical models is einsum notation. Basic einsum computes the product of a collection of tensors, with some dimensions preserved in the final result and remaining dimensions summed out. This operation behaves analogously to SumProduct, with the inputs to einsum given as: a string denoting the tensor dimensions of all input and output tensors, and a list of tensors. The former gives the factor graph topology and the latter the factors themselves. For example, einsum("xy,yz->xz",F,G) corresponds to matrix multiplication for matrices F,G. This einsum expression also corresponds to reducing the y variable in a factor graph with three nodes and two factors.

Plated einsum generalizes einsum notation, e.g. [fontsize=] einsum(”xy,iyz-¿xz”,F,G,plates=”i”) == einsum(”xy,yz,yz,yz-¿xz”,F,G[0],G[1],G[2]) where dimension x,z are preserved, variable y is sum-reduced, and plate i is product-reduced. More generally, factors can include plated variables, e.g. Example 3.1 can be written as [fontsize=] einsum(”x,iy,ijxy-¿”,F,G,H,plates=”ij”) == einsum(”x,y,z,xy,xy,xy,xz,xz,xz-¿”, F,G[0],G[1],H[0,0],H[0,1], H[0,2],H[1,0],H[1,1],H[1,2]) where the rightmost dimension of G and H denotes a distinct variable for each slice i (y and z in the unrolled version). Thus the effective number of variables grows with the size of plate i, but the plated notation requires only a constant number of symbols. Formally we infer each variable’s plate set P(v) as the largest set consistent with the input string. In addition, this version of einsum implements generic tensor variable elimination, and so it can also be used to compute marginals and draw samples with the same syntax.

101010For an introduction see e.g. reference (Ghahramani, 2001). (HMM) on a polyphonic music modeling task (Boulanger-Lewandowski et al., 2012). The data consist of sequences {y1,...,yT}, where each yt∈{0,1}88 denotes the presence or absence of 88 distinct notes. This task is a common challenge for latent variable models such as continuous state-space models (SSMs), where one of the difficulties of inference is that training is typically stochastic, i.e. the latent variables need to be sampled.111111This is true for all five reference models in this section, apart from the RTRBM. In contrast, the discrete latent variable models explored here—each defined through a plated factor graph—admit efficient tensor variable elimination, obviating the need for sampling.

We consider 12 different latent variable models, where the emission likelihood for each note is replicated on a plate of size 88, so that notes at each time step are conditionally independent. Writing these models as probabilistic programs allows us to easily experiment with dependency structure and parameterization, with variation along two dimensions: