We estimate the general influence functions for spatio-temporal Hawkes processes using a tensor recovery approach by formulating the location dependent influence function that captures the influence of historical events as a tensor kernel. We assume a low-rank structure for the tensor kernel and cast the estimation problem as a convex optimization problem using the Fourier transformed nuclear norm (TNN). We provide theoretical performance guarantees for our approach and present an algorithm to solve the optimization problem. We demonstrate the efficiency of our estimation with numerical simulations. 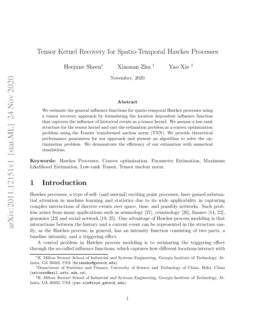 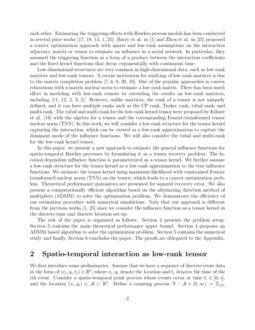 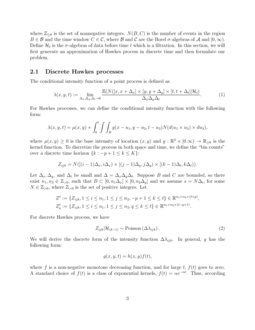 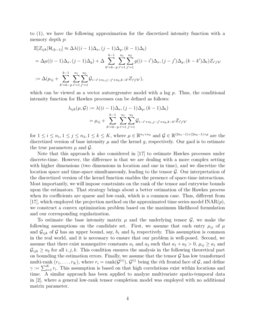 Hawkes processes, a type of self- (and mutual) exciting point processes, have gained substantial attention in machine learning and statistics due to its wide applicability in capturing complex interactions of discrete events over space, time, and possibly networks. Such problem arises from many applications such as seismology

[21], criminology [26], finance [14, 22], genomics [23] and social network [19, 25]. One advantage of Hawkes process modeling is that interactions between the history and a current event can be represented in the structure easily, as the Hawkes process, in general, has an intensity function consisting of two parts, a baseline intensity, and a triggering effect.

A central problem in Hawkes process modeling is to estimating the triggering effect through the so-called influence functions, which captures how different locations interact with each other. Estimating the triggering effects with Hawkes process models has been conducted in several prior works [17, 18, 13, 1, 25]. Bacry et al. in [1] and Zhou et al. in [25] proposed a convex optimization approach with sparse and low-rank assumptions on the interaction adjacency matrix or tensor to estimate an influence in a social network. In particular, they assumed the triggering function as a form of a product between the interaction coefficients and the fixed kernel functions that decay exponentially with continuous time.

[7, 6, 8, 20, 10]. One of the popular approaches is convex relaxations with a matrix nuclear norm to estimate a low-rank matrix. There has been much effort in modeling with low-rank tensors by extending the results on low-rank matrices, including [11, 12, 2, 3, 5]. However, unlike matrices, the rank of a tensor is not uniquely defined, and it can have multiple ranks such as the CP rank, Tucker rank, tubal rank, and multi-rank. The tubal and multi-rank for the low-rank kernel tensor were proposed by Kilmer et al. [16] with the algebra for a tensor and the corresponding Fourier-transformed tensor nuclear norm (TNN). In this work, we will consider a low-rank structure for the tensor kernel capturing the interaction, which can be viewed as a low-rank approximation to capture the dominant mode of the influence functions. We will also consider the tubal and multi-rank for the low-rank kernel tensor.

In this paper, we present a new approach to estimate the general influence functions for spatio-temporal Hawkes processes by formulating it as a tensor recovery problem. The location dependent influence function is parameterized as a tensor kernel. We further assume a low-rank structure for the tensor kernel as a low-rank approximation to the true influence functions. We estimate the tensor kernel using maximum likelihood with constrained Fourier transformed nuclear norm (TNN) on the tensor, which leads to a convex optimization problem. Theoretical performance guarantees are presented for squared recovery error. We also present a computationally efficient algorithm based on the alternating direction method of multipliers (ADMM) to solve the optimization problem. We demonstrate the efficiency of our estimation procedure with numerical simulations. Note that our approach is different from the previous works [1, 25] since we consider the influence function as a tensor kernel in the discrete-time and discrete location set-up.

The rest of the paper is organized as follows. Section 2 presents the problem setup. Section 3 contains the main theoretical performance upper bound. Section 4 proposes an ADMM based algorithm to solve the optimization problem. Section 5 contains the numerical study and finally, Section 6 concludes the paper. The proofs are delegated to the Appendix.

We first introduce some preliminaries. Assume that we have a sequence of discrete event data in the form of (xi,yi,ti)∈R3, where xi,yi denote the location and ti denotes the time of the ith event. Consider a spatio-temporal point process whose events occur at time ti∈[0,s], and the location (xi,yi)∈A⊂R2. Define a counting process N:A×[0,∞)→Z≥0, where Z≥0 is the set of nonnegative integers. N(B,C) is the number of events in the region B∈B and the time window C∈C, where B and C are the Borel σ-algebras of A and [0,∞). Define Ht is the σ-algebras of data before time t which is a filtration. In this section, we will first generate an approximation of Hawkes process in discrete time and then formulate our problem.

The conditional intensity function of a point process is defined as

For Hawkes processes, we can define the conditional intensity function with the following form:

For discrete Hawkes process, we have

We will derive the discrete form of the intensity function Δλijk. In general, g has the following form:

where f is a non-negative monotone decreasing function, and for large t, f(t) goes to zero. A standard choice of f(t) is a class of exponential kernels, f(t)=αe−αt. Thus, according to (1), we have the following approximation for the discretized intensity function with a memory depth p:

p. Thus, the conditional intensity function for Hawkes processes can be defined as follows:

Note that this approach is also considered in [17] to estimate Hawkes processes under discrete-time. However, the difference is that we are dealing with a more complex setting with higher dimensions (two dimensions in location and one in time), and we discretize the location space and time-space simultaneously, leading to the tensor G. Our interpretation of the discretized version of the kernel function enables the presence of space-time interactions. Most importantly, we will impose constraints on the rank of the tensor and entrywise bounds upon the estimators. That strategy brings about a better estimation of the Hawkes process when its coefficients are sparse and low-rank, which is a common case. Thus, different from [17], which employed the projection method on the approximated time series model INAR(p), we construct a convex optimization problem based on the maximum likelihood formulation and our corresponding regularization.

To estimate the base intensity matrix μ and the underlying tensor G, we make the following assumptions on the candidate set. First, we assume that each entry μij of μ and Gijk of G has an upper bound, say, b1 and b2 respectively. This assumption is common in the real world, and it is necessary to ensure that our problem is well-posed. Second, we assume that there exist nonnegative constants a1 and a2 such that a1+a2>0, μij≥a1 and Gijk≥a2 for all i,j,k. This condition ensures the analysis in the following theoretical part on bounding the estimation errors. Finally, we assume that the tensor G has low transformed multi-rank (r1,…,rK), where ri=rank(G(i)), G(i) being the ith frontal face of G, and define γ:=∑Ki=1ri. This assumption is based on that high correlations exist within locations and time. A similar approach has been applied to analyze multivariate spatio-temporal data in [2], where a general low-rank tensor completion model was employed with no additional matrix parameter.

In this section, we introduce the tensor nuclear norm (TNN), which we use to guarantee the low-rankness of G. Before moving on, we first summarize the notations. For matrix X, let ∥X∥

be the spectral norm, the largest absolute singular value,

∥X∥∗ be the nuclear norm, the sum of the singular values, ∥X∥F=(∑i,jX2ij)1/2 be the Frobenius norm, and ∥X∥∞=max|Xij| be the infinity norm. For a 3-way tensor G∈RN1×N2×N3, we denote the kth frontal face of G by G(k). Let ˜G be the tensor obtained by applying the Fast Fourier Transform (FFT) to the mode-3 fibers of G. Define the norm of tensor, ∥G∥1=∑i,j,k|Gijk|, ∥G∥F=(∑i,j,kG2ijk)1/2. We introduce three operators for a tensor: fold, unfold and bcirc.

proposed a singular value decomposition (SVD) method for three way tensors. Based on this tensor SVD, TNN is proposed by Semerci et al.

[24]. We review some background material on the tensor SVD mostly referring to [16]. Consider a tensor G∈RN1×N2×N3, the following lemma describes the block diagonalization property of block circulant matrices.

where ⊗ is the Kronecker product, IN1 and IN2 are the identity matrices in RN1×N1 and RN2×N2, respectively, FN3∈RN3×N3 is the normalized discrete Fourier Transform matrix, F∗ denotes the conjugate transpose of F, and ˜G(k)s are the frontal faces of the tensor ˜G.

The following theorem provides the tensor-SVD for three-way tensors:

where (:,i,:) and (i,i,:) extract the corresponding tensor frontal slice.

From the construction of proof for Theorem 2 and according to Lemma 1, we have the following relationship in the Fourier domain:

Note that the dual norm of the tensor nuclear norm is the tensor spectral norm ∥G∥spec:=∥bcirc(G)∥.

By our assumptions on the low-rank tensor G, we have

Accordingly, the candidate set D for the true value (μ,G) is defined as:

Based on the candidate set D defined in the previous section, an estimator (ˆμ,ˆG) can be obtained by solving the following convex optimization problem.

Note that the convex optimization problem (24) constrained in a candidate set D can also be formulated as a regularized maximum likelihood function problem. Indeed, there exists a constant τ∈R such that problem (24) equals to

with the natural constraint upon the entries:

for 1≤i≤n1,1≤j≤n2,1≤k≤p. It follows from the duality theory in optimization (see [4] for more details). In the algorithm part (Section 4), we use the regularized form.

We present an upper bound for the sum of squared errors of the two estimators, which is defined by

Let us first define the “condition number” as in [15] to describe our theoretical guarantee.

Now, we present our main theorem.

(Estimation error driven by data) Assume that (μ,G)∈D and (ˆμ,ˆG) are the optimal solution to (24). Let

If there exist constants c1 and c2 such that ¯J≤c1:

and δ2[A[ZK]]≥c2, we derive the following nonrandom upper bound

The proof for Theorem 3

is presented in the Appendix. In the proof, the Kullback-Leibler (KL) divergence and Hellinger distance are defined between two Poisson distributions. For any two Poisson mean

p and q, the KL -divergence is defined as

and the Hellinger distance as

Then, a lower bound is derived for ∑Kk=1∑n1i=1∑n2j=1D(λijk(μ,G)||λijk(ˆμ,ˆG)) using the Helliger distance and Lemma 8 in [9]. Furthermore, we establish an upper bound on the sum of the KL divergence using the Azuma Hoeffding inequality. By combining the lower and upper bound, we obtain the upper bound for the estimation error.

Corollary 1 immediately follows from Theorem 3. In particular, it demonstrates the data driven upper bound for the sum of KL divergence between the estimated and the true intensity functions.

with probability at least 1−α1−α2.

For the proposed convex optimization problem (24), we apply the alternating direction method of multipliers (ADMM) and the majorization-minimization (MM) algorithms. Based on the ADM4 algorithm proposed in [25], we design our algorithm for the problem (24). First, define the closed and convex sets:

By introducing auxiliary variables m,G and R, (38) can be equivalently expressed as

Consider the following augmented Lagrangian of (40) to apply the ADMM:

The ADMM for solving the above augmented Lagrangian problem requires the following steps:

We start with deriving the updating step for G and μ as follows. Note that for the step (47), the following optimization problem is considered:

where μ(q) and G(q) are estimates of μ and G. Then, we can obtain optimal solutions of convex problem(55) by using the iterative procedure: