In this paper, we analyse two deep learning methods to predict sperm motility and sperm morphology from sperm videos. We use two different inputs: stacked pure frames of videos and dense optical flows of video frames. To solve this regression task of predicting motility and morphology, stacked dense optical flows and extracted original frames from sperm videos were used with the modified state of the art convolution neural networks. For modifications of the selected models, we have introduced an additional multi-layer perceptron to overcome the problem of over-fitting. The method which had an additional multi-layer perceptron with dropout layers, shows the best results when the inputs consist of both dense optical flows and an original frame of videos. 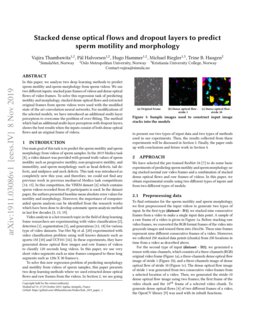 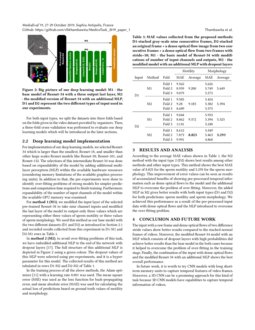 Our main goal of this task is to predict the sperm motility and sperm morphology from videos of sperm samples. In the 2019 Medico task (medico2019overview), a video dataset was provided with ground truth values of sperm motility such as progressive motility, non-progressive motility, and immotility, and sperm morphology such as head defects, tail defects, and midpiece and neck defects. This task was introduced as completely new this year, and therefore, we could not find any previous work in previous mediaeval Medico task competitions (pogorelov2018medico; riegler2017multimedia). In this competition, the VISEM dataset (visem) which contains sperm videos recorded from 85 participants is used. In the dataset paper, the authors presented baseline mean absolute error values for motility and morphology. Moreover, the importance of computer-aided sperm analysis can be identified from the research works which have been done to develop automatic sperm analysis method in last few decades (mortimer2015future; Urbano2017; Dewan2018).

. In these experiments, they have generated dense optical flow images and row frames of videos to classify 120 seconds long videos. In this paper, we use very short video segments such as nine frames compared to these long segments such as 120s X 30 frames/s.

To solve this new regression problem of predicting morphology and motility from videos of sperm samples, this paper presents two deep learning methods where we used extracted dense optical flows and raw frames from the videos. In Section 2, we are going to present our two types of input data and two types of methods used in our experiments. Then, the results collected from these experiments will be discussed in Section 3. Finally, the paper ends up with conclusions and future work in Section 4.

We have selected the pre-trained ResNet-34 (resnet_34) to do some basic experiments of predicting sperm motility and sperm morphology using stacked normal raw video frames and a combination of stacked dense optical flows and raw frames of videos. In this paper, we obtain experimental results using two different types of inputs and from two different types of models.

To find estimates for the sperm motility and sperm morphology, we first preprocessed the input videos to generate two types of input. In the first type

(dataset - D1), we stacked nine consecutive frames from a video to make a single input data point. A sample of a raw frame of a video is given in Figure (a)a. Before stacking raw video frames, we converted the RGB format frames of the video into grayscale images and resized them into 256x256. These nine frames represent nine different consecutive frames of a video. Moreover, we collected 250 stacked data points (chunks) from 250 locations in time from a video as described above.

For the second type of input (dataset - D2)

, we generated a tensor with nine channels, which consists of a three-channels (RGB) original video frame (Figure

For both input types, we split the datasets into three folds based on the folds given in the video dataset provided by organizers. Then, a three-fold cross-validation was performed to evaluate our deep learning models which will be introduced in the later sections.

For implementation of our deep learning models, we selected Resnet-34 which is larger than the smallest, Resnet-18, and smaller than other large scales Resnet models like Resnet-50, Resnet-101, and Resnet-152. The selections of this intermediate Resnet-34 was done based on expandability of the model by adding additional multi-layer perceptron (MLP) within the available hardware resources (considering memory limitations of the available graphics processing units). In addition to that, the pre-experiments were done to identify over-fitting problems of strong models for simpler predictions and computation time required to finish training. Furthermore, expandability of the number of input channels of the model within the available GPU memory was examined.

For method 1 (M1), we modified the input layer of the selected pre-trained Resnet-34 to take nine channel inputs and modified the last layer of the model to output only three values which are representing either three values of sperm motility or three values of sperm morphology. We used this method as our base model with the two different datasets (D1 and D2) as introduced in Section 2.1 and recorded results collected from this experiment in D1-M1 and D2-M1 rows in Table 1.

In method 2 (M2), to avoid over-fitting problems of this task, we have embedded additional MLP to the end of the network with dropout layers (dropout). The full structure of this additional MLP is depicted in Figure 2 using a green colour. The dropout values of this MLP were selected using pre-experiments, and it is a hyper-parameter for this model. The collected results of this method are tabulated in rows D1-M2 and D2-M2 of Table 1.

In the training process of all the above methods, the Adam optimizer (adam) with a learning rate 0.001 was used. The mean square error (MSE

) was used as the loss function for back-propagating error, and

mean absolute error (MAE) was used for calculating the actual loss of predictions based on ground truth values of motility and morphology.

According to the average MAE values shown in Table 1, the M2 method with the input type 2 (D2) shows best results among other methods and other input types. This method shows the best MAE value of 8.825 for the sperm motility and 5.293 for the sperm morphology. This improvement of error values can be seen as results of accumulated benefits of showing pre-processed temporal information such as dense optical flows to the model and the additional MLP to overcome the problem of over-fitting. Moreover, the added MLP in M2 gives better results with both input types (D1 and D2) for both predictions: sperm motility and sperm morphology. We achieved this performance as a result of the pre-processed input data with dense optical flows and the MLP introduced to overcome the over-fitting problem.

The input with a raw frame and dense optical flows of two difference stride values show better results compared to the stacked normal frames of videos. Moreover, the modified Resnet-34 model with an MLP

which consists of dropout layers with high probabilities did achieve better results than the base model in the both cases because it helped to overcome the problem of over-fitting in the training stage. Finally, the combination of the input with dense optical flows and the modified Resnet-34 with an additional