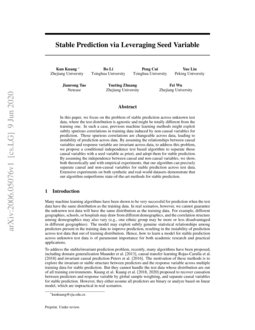 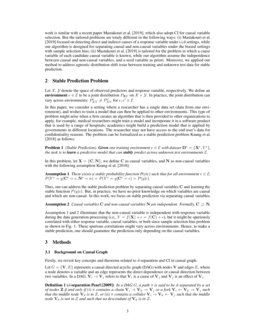 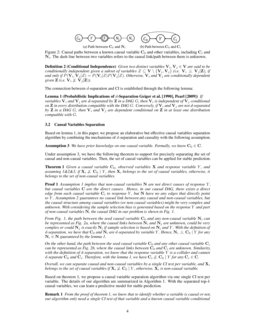 Many machine learning algorithms have been shown to be very successful for prediction when the test data have the same distribution as the training data. In real scenarios, however, we cannot guarantee the unknown test data will have the same distribution as the training data. For example, different geographies, schools, or hospitals may draw from different demographics, and the correlation structure among demographics may also vary (e.g., one ethnic group may be more or less disadvantaged in different geographies). The model may exploit subtly genuine statistical relationships among predictors present in the training data to improve prediction, resulting in the instability of prediction across test data that out of training distribution. Hence, how to learn a model for stable prediction across unknown test data is of paramount importance for both academic research and practical applications.

To address the stable/invariant prediction problem, recently, many algorithms have been proposed, including domain generalization Muandet et al. (2013)

Rojas-Carulla et al. (2018) and invariant causal prediction Peters et al. (2016). The motivation of these methods is to explore the invariant or stable structure between predictors and the response variable across multiple training data for stable prediction. But they cannot handle the test data whose distribution are out of all training environments. Kuang et al. Kuang et al. (2018, 2020) proposed to recover causation between predictors and response variable by global sample weighting, and separate causal variables for stable prediction. However, they either assume all predictors are binary or analyze based on linear model, which are impractical in real scenarios.

without distinguishing the spurious correlation, leading to unstable prediction across test data that out of training distribution. In the literature of causality, causal discovery and causal estimation techniques can be adopted for causal variables selection. PC

Spirtes et al. (2000), FCI Spirtes et al. (2000) and CPC Ramsey et al. (2012) are three of the most prominent causal discovery methods based on conditional independence (CI) test, but their complexity grow exponentially with the number of variables. Moreover, PC method need assume causal sufficiency, i.e., the assumption that all common causes of observed predictors are observed. Athey et al. (2018); Kuang et al. (2017) can approximately identify causal variables via estimating the causal effect of each variable, but they focused on binary predictors and required that all causal variables are observed.

to be a joint distribution

PXY on X×Y. In practice, the joint distribution can vary across environments: PeXY≠Pe′XY for e,e′∈E.

In this paper, we consider a setting where a researcher has a single data set (data from one environment), and wishes to train a model that can then be applied to other environments. This type of problem might arise when a firm creates an algorithm that is then provided to other organizations to apply, for example, medical researchers might train a model and incorporate it in a software product that is used by a range of hospitals; academics might build a prediction model that is applied by governments in different locations. The researcher may not have access to the end user’s data for confidentiality reasons. The problem can be formalized as a stable prediction problem Kuang et al. (2018) as follows:

(Stable Prediction). Given one training environment e∈E with dataset De={Xe,Ye}, the task is to learn a predictive model that can stably predict across unknown test environments E.

Firstly, we revisit key concepts and theorems related to d-separation and CI in causal graph.

Let G={V,E} represents a causal directed acyclic graph (DAG) with nodes V and edges E, where a node denotes a variable and an edge represents the direct dependence or causal direction between two variables. In a DAG, Vi→Vj refers to that Vi is a cause of Vj and Vj is an effect of Vi.

The connection between d-separation and CI is established through the following lemma:

Based on lemma 1, in this paper, we propose an elaborative but effective causal variables separation algorithm by combining the mechanisms of d-separation and causality with the following assumption.

We have prior knowledge on one causal variable. Formally, we know C0∈C.

From Fig. 2, the path between the seed causal variable C0 and any non-causal variable Ni can be represented as Fig. (a)a, where the causal links between Ni and Nj are unknown, could be very complex or could Nj is exactly Ni if sample selection is based on Ni and Y. With the definition of d-separation, we have that C0 and Ni are d-separated by variable Y. Hence, Ni⊥⊥C0∣Y for any Ni∈N guaranteed by the lemma 1.

On the other hand, the path between the seed causal variable C0 and any other causal variable Ci can be represented as Fig. (b)b, where the causal links between C0 and Ci are unknown. Similarity, with the definition of d-separation, we know that the response variable Y is a collider and cannot d-separate C0 and Ci. Therefore, with the lemma 1, we have Ci⧸⊥⊥C0∣Y for any Ci∈C.

Based on theorem 1, we propose a causal variable separation algorithm via one single CI test per variable. The details of our algorithm are summarized in Algorithm 1. With the separated top-k causal variables, we can learn a predictive model for stable prediction.

From the proof of theorem 1, we know that to identify whether a variable is causal or not, our algorithm only need a single CI test of that variable and a known causal variable conditional on the response variable, with no need to know the other causal variables or common causes of observed variables. Then, we conclude that (i) our algorithm is not affected by the unobserved causal variables, but missing some causal variables would decrease the performance of predictive model on prediction; and (ii) the causal sufficiency assumption is not necessary for our algorithm, but we need to assume the independence between causal and non-causal variables.

Complexity Analysis. Note that our algorithm requires only a single CI test per variable. Therefore, it speeds up the causal variables separation as it scales linearly with the number of variables, hence its complexity is O(cp), where p is the dimension of observed variables and c is a constant denoting the complexity of a single CI test.

, they need to assume all causal variable are observed, moreover, PC-simple requires causal sufficiency and with curse of dimensionality; (iii) stable/invariant learning based methods, including invariant causal prediction (ICP)

In our algorithm, we employ causal effect estimator Kuang et al. (2017) to identify one causal variable without assumption 3. Then, we execute CI test with bnlearn method Scutari (2009), denoted as Our+BNCI, and RCIT Strobl et al. (2019) method, denoted as Our+RCIT.

We do not compare with a recent causal variable selection method Mastakouri et al. (2019), since it requires the knowledge of a cause variable of each candidate causal variable, which is not applicable in our problem.

ICP method cannot be applied for variables ranking, but selecting a subset of variables for prediction, where the size of that subset variables is determined by its algorithm. Hence, the experimental results of ICP reported in this paper is based on its unique subset of selected variables.

Similar to Kuang et al. (2018), we also adopt Average_Error and Stability_Error to measure the performance of stable prediction with the following definition:

with independent Gaussian distributions as:

Then, we generate the response variable Y as:

Results on Stable Prediction. With the variable ranking list form each algorithm, we select top-k ranked variables to evaluate their performances on stable prediction across unknown test environments, where k is set as the number of causal variables (i.e., k=0.3∗p). Fig. 3 and Tab. 3 demonstrate the experimental results on stable prediction. From Fig. 3, we find that (i) the performance of our methods are worse than baselines when rtest>1.5. This is because the spurious correlation between unstable non-causal variable and the response variable are highly similar between training data (rtrain=2.0) and test data when rtest>1.5, and that correlation can be exploited for improving predictive performance; (ii) the performance of our methods are much better than baseline when rtest<−1.3, where that spurious correlation are totaly different between training (rtrain=2.0) and test data rtest<−1.3, leading to unstable prediction on baselines; (iii) our methods achieve the most stable prediction across all test data, since our algorithm can precisely separate the causal variables and achieve the lowest ranking of unstable non-causal variable as reported in Tab.4.3.1 and Tab. 4.3.1.

Dataset. To evaluate the performance of our algorithm in real-world datasets, we apply it to a Parkinson’s telemonitoring dataset333https://archive.ics.uci.edu/ml/datasets/parkinsons+telemonitoring, which was wildly used for the problem of domain generalization Muandet et al. (2013); Blanchard et al. (2017) and other regression tasks Tsanas et al. (2009). This dataset consists of biomedical voice measurements from 42 patients with early-stage Parkinson’s disease recruited for a six-month trial of a telemonitoring device for remote symptom progression monitoring. For each patient, there are about 200 recordings, which were automatically recorded in the patients’ home. The task is to predict the clinician’s motor UPDRS scoring of Parkinson’s disease symptoms from patients’ features, including their age, gender, test time and many other measures.

Experimental Settings. In our experiments, we set the motor UPDRS scoring as the response variables Y. To test the stability of all methods, we generate different environments by biased data separation based on different patients. Specifically, we separate the whole 42 patients into 4 patients’ groups, including group 1 (G1) with recordings from 21 patients, and other three groups (G2, G3 and G4) are all with recordings from different 7 patients, where the different groups correspond to different environments. Considering a practical setting where a researcher has a single data set and wishes to train a model that can then be applied to other environments, in our experiments, we trained all models with data from environment G1, but tested them on all 4 groups.

Experimental Results. We report the experimental results of RMSE with top-k ranked variables in Figure 4. Fig. (a)a shows that correlation based methods (LASSO, mRMR and RF) outperform causation based methods (GBA and our method), this is because the training and test have the similar distribution on env. G1, hence the spurious correlation between non-causal variables and response variable can bring positive power for prediction. Moreover, we find ICP method achieves good performance in env. G1 since it cannot differentiate the spurious correlation from only one training environment. Fig. (b)b, (c)c and (d)d demonstrate that causation based methods are better than correlation based methods when the test distributions are out of the training one, and our method, especially the method “our+RCIT”, can almost achieve the best performance. The main reason is that spurious correlation on training could be different on testing, while causation based methods could discover causal variables for more stable prediction across environments, and our method performs the best on causal variables ranking and separation. In addition, we observed that in non-i.i.d settings444The test distribution is different from the training one., the prediction performance might seriously decrease as inputting more selected variables, since some selected variables could be spuriously correlated with the response and unstable across environments.