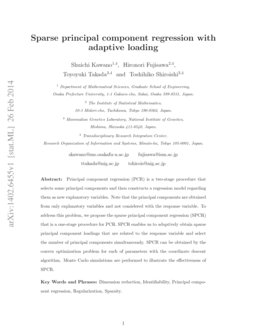 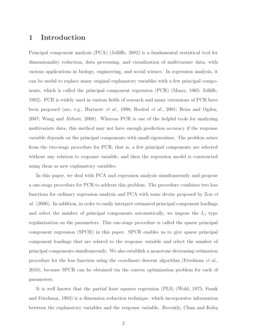 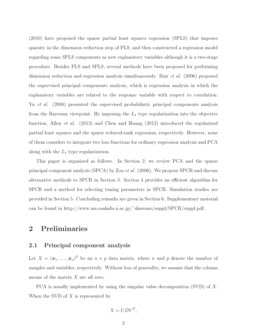 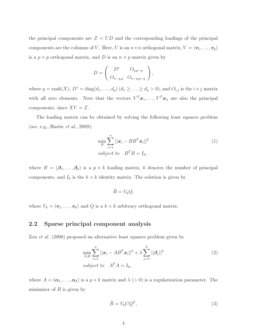 Principal component analysis (PCA) (Jolliffe, 2002) is a fundamental statistical tool for dimensionality reduction, data processing, and visualization of multivariate data, with various applications in biology, engineering, and social science. In regression analysis, it can be useful to replace many original explanatory variables with a few principal components, which is called the principal component regression (PCR) (Massy, 1965; Jolliffe, 1982). PCR is widely used in various fields of research and many extensions of PCR have been proposed (see, e.g., Hartnett et al., 1998; Rosital et al.

, 2001; Reiss and Ogden, 2007; Wang and Abbott, 2008). Whereas PCR is a useful tool for analyzing multivariate data, this method may not have enough prediction accuracy if the response variable depends on the principal components with small eigenvalues. The problem arises from the two-stage procedure for PCR; a few principal components are selected with large eigenvalues, but without any relation to response variable, and then the regression model is constructed using them as new explanatory variables.

The partial least squares regression (PLS) (Wold, 1975; Frank and Friedman, 1993) is a dimension reduction technique, which incorporates information between the explanatory variables and the response variable. Recently, Chun and Keleş (2010) have proposed the sparse partial least squares regression (SPLS) that imposes sparsity in the dimension reduction step of PLS, and then constructed a regression model regarding some SPLS components as new explanatory variables, although it is a two-stage procedure. Besides PLS and SPLS, several methods have been proposed for performing dimension reduction and regression analysis simultaneously. Bair et al. (2006) proposed the supervised principal component analysis, which is regression analysis in which the explanatory variables are related to the response variable with respect to correlation. Yu et al. (2006) presented the supervised probabilistic principal component analysis from the Bayesian viewpoint. By imposing the L1 type regularization into the objective function, Allen et al. (2013) and Chen and Huang (2012) introduced the regularized partial least squares and the sparse reduced-rank regression, respectively. However, none of them integrated the two loss functions for ordinary regression analysis and PCA along with the L1 type regularization.

This paper is organized as follows. In Section 2, we review PCA and the sparse principal component analysis (SPCA) by Zou et al. (2006). We propose SPCR and discuss alternative methods to SPCR in Section 3. Section 4 provides an efficient algorithm for SPCR and a method for selecting tuning parameters in SPCR. Monte Carlo simulations and real data analyses are provided in Section 5. Concluding remarks are given in Section 6. The R language software package spcr, which implements SPCR, is available on the Comprehensive R Archive Network (http://cran.r-project.org). Supplementary materials can be found in https://sites.google.com/site/shuichikawanoen/research/suppl_spcr.pdf.

Let X=(x1,…,xn)T be an n×p data matrix, where n and p denote the sample size and the number of variables, respectively. Without loss of generality, we assume that the column means of the matrix X are all zero.

X. When the SVD of X is represented by

matrix with all zero elements. Note that the vectors

where B=(β1,…,βk) is a p×k loading matrix, k denotes the number of principal components, and Ik is the k×kidentity matrix. The solution is given by

where Vk=(v1,…,vk) and Q is a k×k arbitrary orthogonal matrix.

where C=diag(c1,…,ck), ci (i=1,…,k) is a positive constant, and Q is an arbitrary orthogonal matrix. The case λ=0 yields the same solution as (1). Formula (2) is a quadratic programming problem with respect to each parameter matrix A and B, but Formula (1) is not.

In addition, Zou et al. (2006) proposed to add a sparse regularization term for B to easily interpret the estimate ^B, which is called SPCA;

where λ1,j’s  (j=1,…,k) are regularization parameters with positive value and ||⋅||1 is the L1 norm of β. Note that the minimization problem (4) is also the quadratic programming problem with respect to each parameter matrix A and B. After simple calculation, the problem (4) becomes

This optimization problem is analogous to the elastic net problem in Zou and Hastie (2005), and hence Zou et al. (2006) proposed an alternating algorithm to estimate A and B iteratively. In particular, the LARS algorithm (Efron et al., 2004) is employed to obtain the estimate of B numerically.

Another approach to obtain a sparse loading matrix is SCoTLASS (Jolliffe et al., 2003). However, Zou et al. (2006) pointed out that the loadings obtained by SCoTLASS are not sparse enough. Also, Lee et al. (2010) and Lee and Huang (2013) developed SPCA for binary data.

To overcome this drawback, we propose SPCR using the principal components BTx as follows:

where γ0 is an intercept, γ=(γ1,…,γk)T is a coefficient vector, λβ and λγ are regularization parameters with positive value, and w and ζ are tuning parameters whose values are between zero and one.

The first term in Formula (5) means the least squares loss between the response and the principal components BTx. The second term induces PCA loss of data X. The tuning parameter w controls the trade-off between the first and second terms, and then the value of w can be determined by users for any purpose. For example, a smaller value for w is used when we aim to obtain better prediction accuracies, while a larger value for w is used when we aim to obtain the exact formulation of the principal component loadings. The third and fifth terms encourage sparsity on B and γ, respectively. The sparsity on B enables us to easily interpret the loadings of the principal components. Meanwhile, the sparsity on γ induces automatic selection of the number of principal components. The tuning parameter ζ controls the trade-off between the L1 and L2 norms for the parameter B, which was introduced in Zou and Hastie (2005). For detailed roles of this parameter and the L2 norm, see Zou and Hastie (2005).

We see that (5) is a quadratic programming problem with respect to each parameter, because the problem only combines a regression loss with PCA loss. The optimization problem appears to be simple. However, it is not easy to numerically obtain the estimates of the parameters if we do not introduce the L1 regularization terms for B and γ, because there exists an identification problem for B and γ. For an arbitrary orthogonal matrix P, we have

where γ†=Pγ and B†=BPT. This causes non-unique estimators for B and γ. However, we incorporate the L1-penalties on (5) and then we can expect to obtain the minimizer, because the parameter exists on a hypersphere due to orthogonal invariance in (3) and the L1-penalty implies a hypersquare region. For more details, see, e.g., Tibshirani (1996), Jennrich (2006), Choi et al. (2011), and Hirose and Yamamoto (2014). The L1-penalties on B and γ play two types of roles on sparsity and identification problem.

In the numerical study in Sect. 5, we observe that SPCR does not produce enough sparse solution for the loading matrix B. We, therefore, assign different weights to different parameters in the loading matrix B. This idea was adopted in the adaptive lasso (Zou, 2006). Let us consider the weighted sparse principal component regression, given by

where ωlj (>0) is an incorporated weight for the parameter βlj. We call this procedure the adaptive sparse principal component regression (aSPCR). In this paper, we define the weight as ωlj=1/|^βlj(SPCR)|, where ^βlj(SPCR) is an estimate of the parameter βlj obtained from SPCR. In the adaptive lasso, the weight is constructed using the least squares estimators, but it is not applicable due to the identification problem, as described in Sect. 3.1.

Since aSPCR is a quadratic programming problem with respect to each parameter, we can estimate the parameters according to an efficient estimation algorithm for SPCR. In addition, aSPCR enjoys properties similar to SPCR as described in Sect. 3.1.

PLS (see, e.g., Wold, 1975; Frank and Friedman, 1993) seeks directions that relate X to y and capture the most variable directions in the X-space, which is, in general, formulated by

To incorporate sparsity into PLS, SPLS was introduced by Chun and Keleş (2010). The first SPLS direction vector c is obtained by

where M=XTyyTX, and κ,λ1,SPLS,λ2,SPLS are tuning parameters with positive value. Note that the problem (7) becomes the original maximum eigenvalue problem of PLS when κ=1, λ1,SPLS=0, and λ2,SPLS=0. This SPLS problem is solved by alternately estimating the parameters w and c. The idea is similar to that used in SPCA. Chun and Keleş (2010) furthermore introduced the SPLS-NIPALS and SPLS-SIMPLS algorithm for deriving the rest of the direction vectors, and then predicted the response variable by a linear model with SPLS loading vectors as new explanatory variables; it is a two-stage procedure.

To emphasize a difference between our proposed method and the related work described above, we consider an example as follows. Suppose that

This model has another expression in the form

The covariance structures are given by

Let us select the explanatory variable that maximizes the covariance:

For estimating the parameter A, we utilize the same algorithm given by Zou et al. (2006). The parameters B and γ are estimated by the coordinate descent algorithm (Friedman et al., 2010), because the optimization problems include the L1 regularization terms, respectively.

The optimization problem in aSPCR is rewritten as follows:

where y∗ji is the i-th element of the vector Xαj. SPCR is a special case of aSPCR with ωlj=1. The detailed algorithm is given as follows.

The update expression for γj is given by

The estimate of A is obtained by

The estimate of γ0 is derived from

These procedures are iterated until convergence.

To speed up our algorithm, we apply the covariance updates, which was proposed by Friedman et al. (2010), into the parameter updates.

where ~βl′j′ is the current estimate of βl′j′, ri=yi−γ0−∑kj=1∑pl=1γj~βljxil and r∗j′i=y∗j′i−∑pl=1~βlj′xil. After simple calculation, the first term on the right-hand side (up to (1−w)γj′) becomes

Similarly, the update of the parameter γ in (9) is written as

where ~γj′ is the current estimate of γj′. The first term on the right becomes

The tuning parameter w plays a role in prediction accuracy. While a smaller value for w provides good prediction, the estimated models often tend to be unstable due to the flexibility of B. We tried many simulations with several values for w, and then we concluded to set w=0.1 in this study. The tuning parameter ζ takes the role in the trade-off between the L1 and L2 penalties on B. The value of ζ in elastic net is usually determined by users (Zou and Hastie, 2005). In our simulation studies we fixed ζ as 0.01.

The tuning parameters λβ and λγ are optimized using K-fold cross-validation. When the original dataset is divided into K datasets (y(1),X(1)),…,(y(K),X(K)), the CV criterion is given by

where 1(k) is a vector of which the elements are all one, and ^γ(−k)0,^B(−k),^γ(−k) are the estimates computed with the data removing the k-th part. We employed K=5 in our simulation. The tuning parameters λβ and λγ were, respectively, selected from 10 equally-spaced values on [λmin,λmax], where λmin and λmax were determined according to the function glmnet in R.

Monte Carlo simulations were conducted to investigate the performances of our proposed method. Three models were examined in this study.

In the first model, we considered the 10-dimensional covariate vector x=(x1,…,x10)T

Σ1, and generated the response y

from the linear regression model given by

In the second model, we considered the 20-dimensional covariate vector x=(x1,…,x20)T according to a multivariate normal distribution N(020,Σ2), and generated the response y by

is a sparse approximation of the fourth eigenvector of

In the third model, we assumed the 30-dimensional covariate vector x=(x1,…,x30)T according to a multivariate normal distribution N(030,Σ3), and generated the response y by

σ was set to 0.1 or 1. Our proposed methods, SPCR and aSPCR, were fitted to the simulated data with one or 10 components (k=1,10) for Case 1, one or five components (k=1,5) for Case 2, and 10 components (k=10) for Case 3. Our proposed methods were compared with SPLS, PLS, and PCR. SPLS was computed by the package spls in R, and PLS and PCR by the package pls in R. The number of components and the values of tuning parameters in SPLS, PLS, and PCR were selected by 10-fold cross-validation. The performance was evaluated by MSE=E[(y−^y)2]. The simulation was conducted 100 times and the MSE was estimated by 1,000 random samples.