Deep Convolutional Neural Networks (DCNNs) have achieved impressive performance in Single Image Super-Resolution (SISR). To further improve the performance, existing CNN-based methods generally focus on designing deeper architecture of the network. However, we argue blindly increasing network's depth is not the most sensible way. In this paper, we propose a novel end-to-end Residual Neuron Attention Networks (RNAN) for more efficient and effective SISR. Structurally, our RNAN is a sequential integration of the well-designed Global Context-enhanced Residual Groups (GCRGs), which extracts super-resolved features from coarse to fine. Our GCRG is designed with two novelties. Firstly, the Residual Neuron Attention (RNA) mechanism is proposed in each block of GCRG to reveal the relevance of neurons for better feature representation. Furthermore, the Global Context (GC) block is embedded into RNAN at the end of each GCRG for effectively modeling the global contextual information. Experiments results demonstrate that our RNAN achieves the comparable results with state-of-the-art methods in terms of both quantitative metrics and visual quality, however, with simplified network architecture. 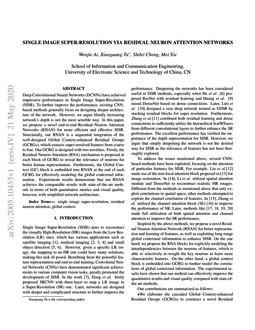 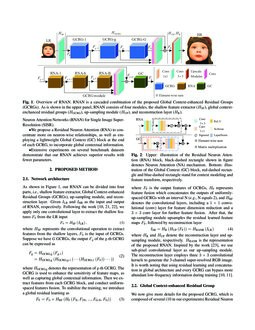 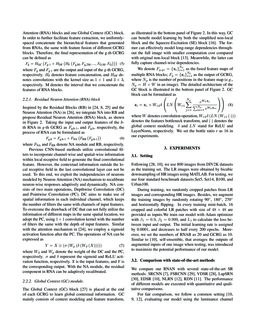 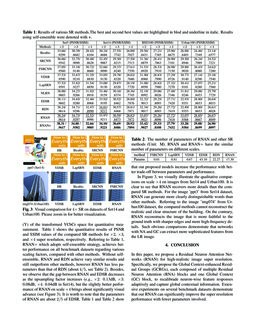 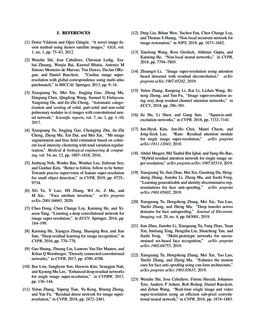 Single Image Super-Resolution (SISR) aims to reconstruct the visually High-Resolution (HR) images from the Low Resolution (LR) ones, which has various applications such as satellite imaging [27], medical imaging [17, 20, 19] and small object detection [14, 18]

. However, given a specific LR image, the mapping to an HR one could have many solutions, making this task ill-posed. Benefiting from the powerful feature representation and end-to-end training, Convolutial Neural Networks (CNNs) have demonstrated significant achievements in various computer vision tasks, greatly promoted the development of SISR. In the work

[2], Dong et al. firstly proposed SRCNN with three-layer to map a LR image to a Super-Resolution (SR) one. Later, networks are designed with deeper and complicated structure to further improve the performance. Deepening the networks has been considered useful in SISR methods, especially when He et al. [4] proposed ResNet with residual learning and Huang et al. [6] raised DenseNet based on dense connections. Later, Lim et al. [11] designed a very deep network termed as EDSR by stacking residual blocks for super resolution. Furthermore, Zhang et al.[29] combined both residual learning and dense connections to sufficiently utilize the hierarchical featWEures from different convolutional layers to further enhance the SR performance. The excellent performance has verified the importance of the depth representation for SISR. However, we argue that simply deepening the network is not the desired way for SISR as the relevance of features has not been thoroughly explored.

To address the issues mentioned above, several CNN-based methods have been exploited, focusing on the attention of particular features for SISR. For example, Liu et al.[12] made use of the non-local attention block proposed in [26] for image restoration. In [10], Li et al. utilized spatial attention module and DenseNet to reconstruct realistic HR images. Different from the methods as mentioned above that only exploit correlations in spatial space, other methods attempted to explore the channel correlation of features. In [28], Zhang et al. utilized the channel attention block (SE) [5] to improve the performance of SR. Later, methods like [8, 13, 24, 21] made full utilization of both spatial attention and channel attention to improve the SR performance.

Inspired by the above methods, we propose a novel Residual Neuron Attention Network (RNAN) for better representation and learning of features, as well as exploiting long-range global contextual information to enhance SISR. On the one hand, we propose the RNA blocks for explicitly modeling the interdependencies between the neurons of features, which is able to selectively re-weight the key neurons to learn more characteristic features. On the other hand, a global context block is embedded into GCRG to further model the correlations of global contextual information. The experimental results have shown that our method can effectively improve the quantitative results and visual quality compared with state-of-the-art methods.

•We propose a Residual Neuron Attention (RNA) to concentrate more on neuron-wise relationships, as well as employing a lightweight Global Context (GC) block at the end of each GCRG, to incorporate global contextual information.

As shown in Figure 1, our RNAN can be divided into four parts, i.e., shallow feature extractor, Global Context-enhanced Residual Groups (GCRGs), up-sampling module, and reconstruction layer. Given ILR and IHR as the input and output of RNAN, respectively. Following the work [11, 30, 22], we apply only one convolutional layer to extract the shallow features F0 from the LR input

where HSF represents the convolutional operation to extract features from the shallow layers, F0 is the input of GCRGs. Suppose we have G GCRGs, the output Fg of the g-th GCRG can be expressed as

where HGCRG,g denotes the representation of g-th GCRG. The GCRG is used to enhance the sensitivity of feature maps, as well as capturing global contextual information. Then we extract features from each GCRG block, and conduct uniform-spaced features fusion. To stabilize the training, we introduce a global residual learning as

where FF is the output features of GCRGs, HF represents feature fusion which concatenates the outputs of uniformly-spaced GCRGs with an interval N (e.g., N equals 2), and HRF denotes the convolutional layers, including a 1×1 convolutional (conv) layer for feature dimension reduction and a 3×3 conv layer for further feature fusion. After that, the up-sampling module upsamples the residual learned feature maps FF, followed by reconstruction layer

where HR and HUP denote the reconstruction layer and upsampling module, respectively. HRANR is the representation of the proposed RNAN. Inspired by the work [16], we use sub-pixel convolutional layer as our up-sampling module. The reconstruction layer employs three 3×3 convolutional kernels to generate the 3-channel super-resolved RGB image. It is worth noting that using residual learning and concatenation in global architecture and every GCRG can bypass more abundant low-frequency information during training [11, 29].

We now give more details for the proposed GCRG, which is composed of several (10 in our experiments) Residual Neuron Attention (RNA) blocks and one Global Context (GC) block. In order to further facilitate feature extraction, we uniformly-spaced concatenate the hierarchical features that generated from RNAs, the same with feature fusion of different GCRG blocks. Therefore, the final representation of the g-th GCRG can be defined as

where Fg and Fg-1 are the output and input of the g-th GCRG, respectively. HF denotes feature concatenation, and HDF denotes convolutions with the kernel size as 1×1 and 3×3, respectively. M denotes the interval that we concatenate the features of RNA blocks.

Inspired by the Residual Blocks (RB) in [25, 4, 23] and the Neuron Attention (NA) in [15], we integrate NA into RB and propose Residual Neuron Attention (RNA) block, as shown in Figure 2. Taking the input and output features of the b-th RNA in g-th GCRG as Fg,b-1, and Fg,b, respectively, the process of RNA can be formulated as

where FNA and FRB denote NA module and RB, respectively.

Previous CNN-based methods utilize convolutional filters to incorporate channel-wise and spatial-wise information within local receptive field to generate the final convolutional feature. However, the contextual information outside the local receptive field in the last convolutional layer can not be used. To this end, we exploit the independencies of neurons modeled by Neuron Attention (NA) mechanism to recalibrate neuron-wise responses adaptively and dynamically. NA consists of two main operations, Depthwise Convolution (DC) and Pointwise Convolution (PC). DC aims to make use of spatial information in each individual channel, which keeps the number of filters the same with channels of input features. To overcome the drawback of DC that can not fully utilize the information of different maps in the same spatial location, we adopt the PC, using 1×1 convolution kernel with the number of filters the same with the depth of input features. Similar with the attention mechanism in [25]

, we employ a sigmoid activation function after the PC. The operations of NA can be expressed as

where Wd and Wp denote the weight of the DC and the PC, respectively. σ and δ

X is the input features, and Y is the corresponding output. With the NA module, the residual component in RNA can be adaptively recalibrated.

The Global Context (GC) block [1] is placed at the end of each GCRG to learn global contextual information. GC mainly consists of context modeling and feature transform, as illustrated in the bottom panel of Figure 2. In this way, GC can benefit model learning by both the simplified non-local block and the Squeeze-Excitation (SE) block [5]. The former can effectively model long-range dependencies throughout the full image with smaller computation cost compared with original non-local block [26]. Meanwhile, the latter can fully capture channel-wise dependencies.

We denote Fg,gc={xi}Npi=1 as the fused feature maps of multiple RNA blocks; Fg={zi}Npi=1 as the output of GCRG, where Np is the number of positions in the feature map (e.g., Np=H×W in an image). The detailed architecture of the GC block is illustrated in the bottom panel of Figure 2. GC block can be formulated as

where W denotes convolution operation, Wv2δ(LN(Wv1(⋅))) denotes the features bottleneck transform, and (⋅) denotes the global context modeling. δ and LN stand for ReLU and LayerNorm, respectively. We set the bottle ratio r as 16 in our experiments.

Following [7, 11], we use 800 images from DIV2K datasets as the training set. The LR images were obtained by bicubic downsampling of HR images using MATLAB. For testing, we use four standard benchmark datasets:Set5, Set14, B100, and Urban100.

During training, we randomly cropped patches from LR images and corresponding HR images. Besides, we augment the training images by randomly rotating 90∘, 180∘, 270∘ and horizontally flipping. In every training mini-batch, 16 cropped and colorful LR patches with size of 48×48 are provided as inputs.We train our model with Adam optimizer with β1=0.9, β2=0.999, and L1

to calculate the loss between input and output. The initial learning rate is assigned by 0.0001, and decreases to half every 200 epochs. Moreover, we set the numbers of RNAB as 20 and GCRG as 10. Similar to

[11], self-ensemble, that averages the outputs of augmented inputs of one image when testing, was introduced to maximize the potential performance of our model.

For fair comparison, we follow a common setting [11, 6, 12], evaluating our model using the luminance channel (Y) of the transformed YCbCr space for quantitative measurement. Table 1 shows the quantitative results of PSNR and SSIM values of the compared SR methods for ×2, ×3, and ×4 super resolution, respectively. Referring to Table 1, RNAN+ which adopts self-ensemble strategy, achieves better performance on all benchmark datasets regarding various scaling factors, compared with other methods. Without self-ensemble, RNAN and RDN achieve vary similar results and still outperform other methods, however RNAN has less parameters than that of RDN (about 4/5, see Table 2). Besides, we observe that the gap between RNAN and EDSR decreases as the upsampling factor increases (e.g., ×2: 0.13dB, ×3: 0.08dB, ×4: 0.04dB in Set14), but the slightly better performance of RNAN on scale ×4 brings about significantly visual advance (see Figure 3). It is worth to note that the parameters of RNAN are about 2/5 of EDSR. Table 1 and Table 2 show that our proposed models increase the performance with better trade-off between parameters and performance.

In Figure 3, we visually illustrate the qualitative comparisons on scale ×4 on images from Set14 and Urban100. It is clear to see that RNAN recovers more details than the compared SR methods. For the image ’ppt3’ from Set14 dataset, RNAN can generate more clearly distinguishable words than other methods. Referring to the image ’img074’ from Urban100 dataset, the compared methods cannot reconstruct the realistic and clear structure of the building. On the contrary, RNAN reconstructs the image that is more faithful to the ground truth with sharper edges and more high-frequency details. Such obvious comparisons demonstrate that networks with NA and GC can extract more sophisticated features from the LR image.