Here, we propose a general method for probabilistic time series forecasting. We combine an autoregressive recurrent neural network to model temporal dynamics with Implicit Quantile Networks to learn a large class of distributions over a time-series target. When compared to other probabilistic neural forecasting models on real- and simulated data, our approach is favorable in terms of point-wise prediction accuracy as well as on estimating the underlying temporal distribution. 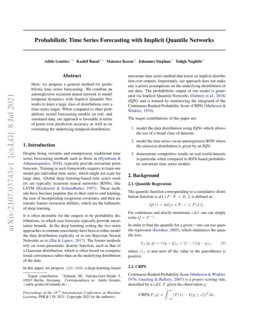 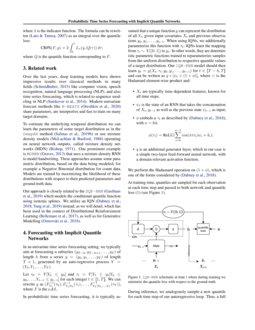 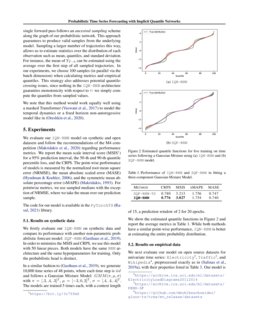 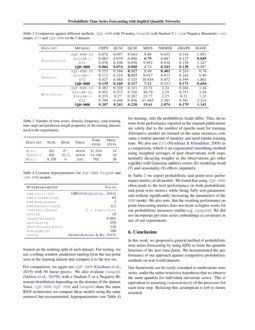 Despite being versatile and omnipresent, traditional time series forecasting methods such as those in (Hyndman and Athanasopoulos, 2018)

. These methods have become popular due to their end-to-end training, the ease of incorporating exogenous covariates, and their automatic feature extraction abilities, which are the hallmarks of deep learning.

It is often desirable for the outputs to be probability distributions, in which case forecasts typically provide uncertainty bounds. In the deep learning setting the two main approaches to estimate uncertainty have been to either model the data distribution explicitly or to use Bayesian Neural Networks as in

. The former methods rely on some parametric density function, such as that of a Gaussian distribution, which is often based on computational convenience rather than on the underlying distribution of the data.

In this paper, we propose IQN-RNN, a deep-learning-based univariate time series method that learns an implicit distribution over outputs. Importantly, our approach does not make any a-priori assumptions on the underlying distribution of our data. The probabilistic output of our model is generated via Implicit Quantile Networks (Dabney et al., 2018)

The major contributions of this paper are:

The quantile function corresponding to a cumulative distribution function (c.d.f.)

For continuous and strictly monotonic c.d.f. one can simply write Q=F−1.

where ()+ is non-zero iff the value in the parentheses is positive.

Continuous Ranked Probability Score (Matheson and Winkler, 1976; Gneiting and Raftery, 2007) is a proper scoring rule, described by a c.d.f. F given the observation y:

where 1 is the indicator function. The formula can be rewritten (Laio and Tamea, 2007) as an integral over the quantile loss:

where Q is the quantile function corresponding to F.

Over the last years, deep learning models have shown impressive results over classical methods in many fields (Schmidhuber, 2015)

To estimate the underlying temporal distribution we can learn the parameters of some target distribution as in the DeepAR method (Salinas et al., 2019b) or use mixture density models (McLachlan and Basford, 1988) operating on neural network outputs, called mixture density networks (MDN) (Bishop, 1971). One prominent example is MDRNN (Graves, 2013)

that uses a mixture-density RNN to model handwriting. These approaches assume some parametric distribution, based on the data being modeled, for example a Negative Binomial distribution for count data. Models are trained by maximizing the likelihood of these distributions with respect to their predicted parameters and ground truth data.

instead, as we will detail, which has been used in the context of Distributional Reinforcement Learning

In probabilistic time series forecasting, it is typically assumed that a unique function g can represent the distribution of all Yt, given input covariates Xt and previous observations y0,y1,…,yt−1. When using IQNs, we additionally parameterize this function with τt: IQNs learn the mapping from τt∼ U([0,1]) to yt

. In other words, they are deterministic parametric functions trained to reparameterize samples from the uniform distribution to respective quantile values of a target distribution. Our

At training time, quantiles are sampled for each observation at each time step and passed to both network and quantile loss (1) (see Figure 1).

During inference, we analogously sample a new quantile for each time step of our autoregressive loop. Thus, a full single forward pass follows an ancestral sampling

scheme along the graph of our probabilistic network. This approach guarantees to produce valid samples from the underlying model. Sampling a larger number of trajectories this way, allows us to estimate statistics over the distribution of each observation such as mean, quantiles, and standard deviation. For instance, the mean of

YT−h can be estimated using the average over the first step of all sampled trajectories. In our experiments, we choose 100 samples (in parallel via the batch dimension) when calculating metrics and empirical quantiles. This strategy also addresses potential quantile-crossing issues, since nothing in the IQN-RNN architecture guaranties monotonicity with respect to τ: we simply compute the quantiles from sampled values.

We note that this method would work equally well using a masked Transformer (Vaswani et al., 2017) to model the temporal dynamics or a fixed horizon non-autoregessive model like in (Oreshkin et al., 2020).

We evaluate our IQN-RNN model on synthetic and open datasets and follow the recommendations of the M4 competition (Makridakis et al., 2020) regarding performance metrics. We report the mean scale interval score (MSIS111https://bit.ly/3c7ffmS) for a 95% prediction interval, the 50-th and 90-th quantile percentile loss, and the CRPS. The point-wise performance of models is measured by the normalized root mean square error (NRMSE), the mean absolute scaled error (MASE) (Hyndman and Koehler, 2006), and the symmetric mean absolute percentage error (sMAPE) (Makridakis, 1993). For pointwise metrics, we use sampled medians with the exception of NRMSE, where we take the mean over our prediction sample.

The code for our model is available in the PyTorchTS (Rasul, 2021) library.

We firstly evaluate our IQN-RNN on synthetic data and compare its performance with another non-parametric probabilistic forecast model: SQF-RNN (Gasthaus et al., 2019). In order to minimize the MSIS and CRPS, we use this model with 50 linear pieces. Both models have the same RNN

architecture and the same hyperparameters for training. Only the probabilistic head is distinct.

and follows a Gaussian Mixture Model:

. The models are trained 5 times each, with a context length of 15, a prediction window of 2 for 20 epochs.

We show the estimated quantile functions in Figure 4 and report the average metrics in Table 1. While both methods have a similar point-wise performance, IQN-RNN is better at estimating the entire probability distribution.

We next evaluate our model on open source datasets for univariate time series:

Electricity222https://archive.ics.uci.edu/ml/datasets/ElectricityLoadDiagrams20112014, Traffic333https://archive.ics.uci.edu/ml/datasets/PEMS-SF, and Wikipedia444https://github.com/mbohlkeschneider/gluon-ts/tree/mv_release/datasets, preprocessed exactly as in (Salinas et al., 2019a), with their properties listed in Table 3. Our model is trained on the training split of each dataset. For testing, we use a rolling-window prediction starting from the last point seen in the training dataset and compare it to the test set.

For comparison, we again use SQF-RNN (Gasthaus et al., 2019) with 50 linear pieces. We also evaluate DeepAR (Salinas et al., 2019b) with a Student-T or a Negative Binomial distribution depending on the domain of the dataset. Since IQN-RNN, SQF-RNN and DeepAR share the same RNN architecture we compare these models using the same untuned, but recommended, hyperparameters (see Table 4) for training: only the probabilistic heads differ. Thus, deviations from performance reported in the original publications are solely due to the number of epochs used for training. Alternative models are trained on the same instances, consume a similar amount of memory, and need similar training time. We also use ETS (Hyndman and Khandakar, 2008) as a comparison, which is an exponential smoothing method using weighted averages of past observations with exponentially decaying weights as the observations get older together with Gaussian additive errors (E) modeling trend (T) and seasonality (S) effects separately.

In this work, we proposed a general method of probabilistic time series forecasting by using IQNs to learn the quantile function of the next time point. We demonstrated the performance of our approach against competitive probabilistic methods on real-world datasets.

Our framework can be easily extended to multivariate time series, under the rather restrictive hypothesis that we observe the same quantile for individual univariate series. This is equivalent to assuming comonotonicity of the processes for each time step. Relaxing this assumption is left to future research.

We wish to acknowledge and thank the authors and contributors of the following open source libraries that were used in this work: GluonTS  (Alexandrov et al., 2020), NumPy (Harris et al., 2020), Pandas (development team, 2020), Matplotlib (Hunter, 2007)

K.R.: I acknowledge the traditional owners of the land on which I have lived and worked, the Wurundjeri people of the Kulin nation who have been custodians of their land for thousands of years. I pay my respects to their elders, past and present as well as past and present aboriginal elders of other communities.