Symbolic Data Analysis (SDA) is a relatively new field of statistics that extends classical data analysis by taking into account intrinsic data variability and structure. As SDA has been mainly approached from a sampling perspective, we introduce population formulations of the symbolic mean, variance, covariance, correlation, covariance matrix and correlation matrix for interval-valued symbolic variables, providing a theoretical framework that gives support to interval-valued SDA. Moreover, we provide an interpretation of the various definitions of covariance and correlation matrices according to the structure of micro-data, which allows selecting the model that best suits specific datasets. Our results are illustrated using two datasets. Specifically, we select the most appropriate model for each dataset using goodness-of-fit tests and quantile-quantile plots, and provide an explanation of the micro-data based on the covariance matrix. 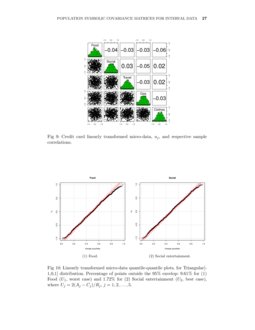 The volume and complexity of available data in virtually all sectors of society has grown enormously, boosted by the globalization and the massive use of the Internet. New statistical methods are required to handle this new reality, and Symbolic Data Analysis (SDA), proposed by Diday in [1], is a promising research area.

When trying to characterize datasets, it may not be convenient to deal with the individual data observations (e.g. because the sample size is too large), or we may not have access to the individual data observations (e.g. because of privacy restrictions). In conventional data analysis, this problem is handled by providing single-valued summary statistics of the data characteristics (e.g. mean, variance, quantiles). The analysis can consider multiple characteristics, but these characteristics can only be single-valued. SDA extends conventional data analysis by allowing the description of datasets through multi-valued features, such as intervals, histograms, or even distributions [2, 3, 4]. These features are called symbolic variables.

Suppose we want to analyze textile sector companies in countries all over the world, e.g. in terms of two characteristics: number of customers and profit. Suppose also that we do have access to the data of individual companies in each country, but only to summary information per country. Conventional data analysis can only deal with single-valued features, like the profit variance, profit mean, or the mean number of customers. Instead, in SDA, the features (the symbolic variables) can be multi-valued, e.g. one feature can be the minimum and maximum profits, and another can be an histogram of the number of customers.

In SDA, the original data is called micro-data and the aggregated data is called macro-data. In the previous example, the micro-data would be the data of individual companies (labeled with the country they belong to), and the macro-data the interval of profit (between maximum and minimum) or the histogram of the number of customers, of the companies of each country. Our main interest in this paper is on interval-valued data [5, 6], where macro-data corresponds to the interval between minimum and maximum of micro-data values.

SDA is a relatively new field of statistics and has been mainly approached from a sampling perspective. The works [7, 3, 8]

introduced measures of location, dispersion, and association between symbolic random variables, formalized as a function of the observed macro-data values. The sample covariance (correlation) matrices were addressed in the context of symbolic principal component analysis in

[9, 10, 11, 12, 13, 14] and more recently in factor analysis [15]. In [14] the authors established relationships between several proposed methods of symbolic principal component analysis and available definitions of sample symbolic variance and covariance. Other areas of statistics have also been addressed by SDA like clustering (e.g. [16, 17]), discriminant analysis (vide e.g. [18, 19]

derived maximum likelihood estimators for the mean and the variance of three types of symbolic random variables: interval-valued, histogram-valued, and triangular distribution-valued variables. In

, authors have formulated interval-valued variables as bivariate random vectors in order to introduce a symbolic regression model based on the theory of generalized linear models. The works

have followed a different approach. In their line of work, the centers and the logarithms of the ranges are collected in a random vector with a multivariate (skew-)normal distribution, which is used to derive methods for the analysis of variance

The area of SDA is lacking theoretical support and our work is a step in this direction. Preferably, the statistical methods of SDA should be grounded on populational formulations, as in the case of conventional methods. A populational formulation allows a clear definition of the underlying statistical model and its properties, and the derivation of effective estimation methods.

In this paper, we derive population formulations of the sample symbolic mean, and of three proposals for the sample symbolic variance and covariance. We then determine the main properties of interval-valued random variables, providing a theoretical framework that gives support to interval-valued SDA. The population formulations of covariance and correlation matrices are also addressed. We focus on the main definitions which result from the various sampling proposals available in the literature, and provide an interpretation of each definition according to the structure of micro-data, which allows selecting the model that best suits specific datasets. This is illustrated using two datasets. Specifically, we select the most appropriate model for each dataset using goodness-of-fit tests and quantile-quantile plots, and provide an explanation of the micro-data based on the covariance matrices.

The paper is structured as follows. In Section 2 we introduce the population formulations of the symbolic mean, variance, covariance, correlation, covariance matrix and correlation matrix for interval-valued symbolic variables, and derive their main properties. In Section 3 we investigate conditions on the micro-data that lead to each of the symbolic covariance matrix definition under study. We also discuss conditions under which a null correlation matrix may be obtained for interval-valued variables. Section 4 presents two case studies, one based on the iris dataset and another based on credit card monthly expenses. Finally, Section 5 presents the conclusions of the paper and some directions for future work.

In this work, we focus on the study of interval-valued variables [28], defined in the following way:

is an interval-valued random variable defined on the probability space

In general, when dealing with this type of data it is considered that only macro-data, in the form of a real interval, [a,b]

, is observed. Since micro-data within each interval is not observed, it is commonly assumed that it follows a Uniform distribution on

When referring to a sample of size n from this population, the i-th sample point (i=1,…,n) can be written as ([ai1,bi1],…,[aip,bip])t, or alternatively, as \boldmathci=(ci1,…,cip)t and \boldmathri=(ri1,…,rip)t, using the centers and ranges representation, where:

In the case of symbolic data analysis, the individual descriptions associated with the i-th symbolic observation ([ai1,bi1],…,[aip,bip])t are all the points in the hyper-rectangle [ai1,bi1]×…×[aip,bip]. This is a departure from classical analysis, and opens the possibility for different definitions of sample symbolic estimators. In the next sections, we start by presenting the various proposals for the sample mean, variance, and covariance. We then establish population definitions for the mean, variance, and covariance (and, from these, for the covariance and correlation matrices), that are in agreement with corresponding sample measures. Finally, we derive several properties for the population measures.

In all definitions, the sample symbolic mean is defined by (j=1,…,p):

This approach has the appeal of using the mean of the interval centers as sample symbolic mean, which makes sense, in particular, under the assumption that the micro-data, associated with [aij,bij], follows a symmetric distribution on [aij,bij].

Regarding the sample symbolic variance, the most straightforward approach is to follow the definition of conventional sample variance of the interval center:

This definition has the disadvantage of ignoring the contribution of the ranges to sample symbolic variance.

The second and third definitions try to overcome this limitation. The second definition, proposed by de Carvalho et al. [29], is based on the squared distances between the interval limits and the sample symbolic mean, and is given by:

The third alternative, proposed by Bertrand and Goupil [7], is obtained from the empirical density function of an interval-value variable, assuming that the micro-data follows a Uniform distribution, and is given by:

The first covariance definition, proposed Billard and Diday [2], is supported on the empirical joint density of two different interval-valued variables, Xj and Xl, and corresponds to the conventional sample covariance of the centers of Xj and Xl. It is given by (j,l=1,…,p):

Finally, the third definition, proposed by Billard [8], is based on the explicit decomposition of the covariance into within sum of products and between sum of products:

In this section, we seek population formulations for the symbolic mean, variance, covariance, correlation, covariance matrices, and correlation matrices. We start by rewriting (2.3) to (2.9) in terms of centers and ranges using (2.2). This leads to simpler expressions, with a more clear interpretation. A detailed derivation of the new expressions can be found in [13]. The sample symbolic mean, variances, and covariances are now:

The sample definitions can be used as starting point for the population definitions. Consider that a sample is written as the realization of a random sample of C and R. Then, population characteristics are obtained as limiting values111Almost sure convergence, when n goes to infinity. of the estimators whose realizations lead to the values (2.10) to (2.16

). This is a direct application of the strong law of large numbers. These results are summarized in the following theorem.

Let C=(C1,…,Cp)t and R=(R1,…,Rp)t be the random vectors of centers and ranges associated with the interval-valued random vector X=(X1,…,Xp)t, where the covariance matrix of C, Cov(C), and E(\boldmathRRt) exist. Let (C1,R1),(C2,R2)…, (Cn,Rn),… be a sequence of random vectors independent and identically distributed to (C,R). Then, for j=1,…,p, the strong law of large numbers guarantees that:

Theorem (2.1) compels us to define a new notation to represent the population symbolic means, symbolic variances, and symbolic covariances.

The definitions of population symbolic mean, variance, and covariance may be extended for interval-valued random vectors, similarly to what is done for conventional random vectors.

Let C=(C1,…,Cp)t and R=(R1,…,Rp)t be the random vectors of centers and ranges associated with the interval-valued random vector, X, where Cov(C)=\UpsigmaCC and E(\boldmathRRt) exist. Then, the population symbolic mean vector of X is E(\boldmathX)=E(C) and Covk(\boldmathX)=\Upsigmak,k=1,…,5 are the (p×p) population symbolic covariance matrices obtained according to the combinations of symbolic variances and covariances listed in Table 1.

The definitions of symbolic correlation matrices follow directly from those of symbolic covariance matrices, in the following way:

Let C=(C1,…,Cp)t and R=(R1,…,Rp)t be the random vectors of centers and ranges, respectively, associated with interval-valued random variable, X, where Cov(C)=\UpsigmaCC and E(\boldmathRRt) exist, and \Upsigmak=[σkij]222The “k” in σkij denotes an index and not an exponent. and \boldmathUk=Diag(√σk11,…,√σkpp). Then, the symbolic correlation matrices associated with definitions in Table 1 are given by \boldmathPk=\boldmathU−1k\Upsigmak\boldmathU−1k and, equivalently, \Upsigmak=\boldmathUk\boldmathPk\boldmathUk, k=1,…,5. Moreover, the k-th definition of symbolic correlation between two interval-valued random variables, Xj and Xl, is

To establish properties of symbolic means, variances, and covariances we need to introduce some basic results from Moore’s Interval Algebra [32]. These results are listed in [33], but we write them here in terms of interval-valued random variables described by their centers and ranges.

The definition of population symbolic mean (vide Definition (2.2)) leads to the following properties:

Since proofs of these properties are quite straightforward to obtain using Definition 2.3 and the Interval Algebra results summarized in Definition 2.5, they are omitted.

The definitions of symbolic variance (vide Definition 2.3) lead to the following properties:

Once again, the proof of the previous properties follows immediately from definitions 2.3 and 2.5, and is therefore not included here.

The proof of these results is shown in the Appendix A. ∎

Regarding the symbolic correlation, the next theorem establishes that it is a quantity between -1 and 1, as in the conventional case.

For k=1,2,3, considering the definitions of Cork(X1,X2) and the Cauchy-Schwarz inequality we obtain:

As usual, we are also interested in understanding if symbolic correlations are also invariant under linear transformations and in what cases they reach their extreme values (-1 and 1). The next theorem clarifies these issues.

Let Xj=[Cj−Rj2,Cj+Rj2], j=1,2, be interval-valued random variables such that their symbolic correlation, Cork(X1,X2), defined by (2.24) exists and ω1≠0. Then the following properties hold: