Autonomous vehicles, on the ground and in the air, are the next big evolution in human mobility. While autonomous driving in highway scenarios is already possible using only the vehicles sensors, the complex scenarios of big cities with all its different traffic participants is still a vision. Cellular Vehicle-to-Everything (C-V2X) communication is a necessary enabler of this vision and and an emerging field of interest in today's research. However, to the best of our knowledge open source simulators essential for open research do not exist yet. In this work we present our open source C-V2X mode 4 simulator based on the discrete-event network simulator ns-3. To analyze the performance of C-V2X mode 4 using our simulator, we created a worst case scenario and the 3GPP reference Manhattan grid scenario using the microscopic traffic simulator SUMO. We also added the WINNER+ B1 channel model to ns-3, as this is also used by 3GPP. Our results show, that C-V2X is scalable to 250 vehicles within a worst case scenario on a playground of 100 m x 100 m, with respect to the LTE rel. 14 V2X requirements. For the more realistic Manhattan grid scenario, the performance is better, as to be expected. We also analyzed the Packet Inter-Reception time with an outcome of max. 100 ms for more than 99 transmissions. In addition, we investigated the impact of the Resource Reservation Period and the Resource Reselection Probability on the system's Packet Reception Ratio. 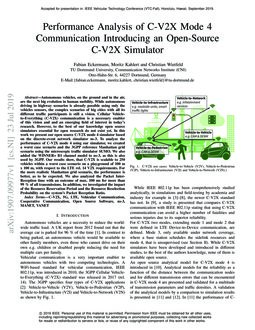 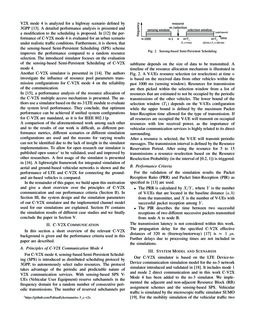 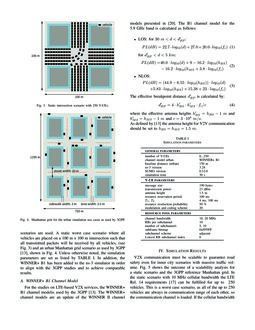 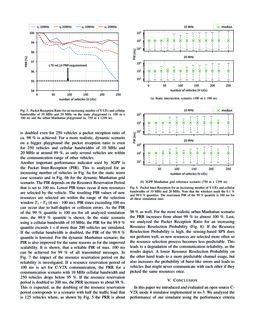 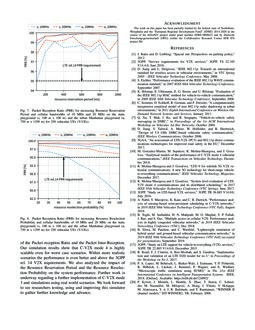 Studying the anonymity trilemma with a discrete-event mix network simulator

In this work, we present a discrete event mix network simulator, which a...
Ania M. Piotrowska, et al. ∙

Due to the rapid technology evolution and standardization activity in th...
Katerina Koutlia, et al. ∙

On the Application of Network Slicing for 5G-V2X

Autonomous vehicles are a necessity to reduce the worldwide traffic load. A UK report from 2012 found out that the average car is parked for 96 % of the time [1]. In contrast to being parked, an autonomous vehicle would be available to other family members, even those who cannot drive on their own e.g. children or disabled people reducing the need for multiple cars per family. Vehicular communication is a very important enabler to autonomous vehicles with two competing technologies. A WiFi-based standard for vehicular communication, IEEE 802.11p, was introduced in 2010, the 3GPP Cellular Vehicle-to-Everything (C-V2X) standard was released in 2017 (rel. 14). The 3GPP specifies four types of C-V2X applications [2]: Vehicle-to-Vehicle (V2V), Vehicle-to-Pedestrian (V2P), Vehicle-to-Infrastructure (V2I) and Vehicle-to-Network (V2N) as shown by Fig. 1.

While IEEE 802.11p has been comprehensively studied analytically, in simulations and field-testing by academia and industry for example in [3, 4, 5, 6, 7, 8], the newer C-V2X standard has not. In [9], a study is presented that compares C-V2X communication with IEEE 802.11p stating that using C-V2X communication can avoid a higher number of fatalities and serious injuries due to its superior reliability. For C-V2X two modes, extending mode 1 and mode 2 that were defined in LTE Device-to-Device communication, are defined. Mode 3, only available under network coverage, where a base station schedules the sidelink resources and mode 4, that is unsupervised (see Section II). While C-V2X simulators have been developed and introduced in different studies, to the best of the authors knowledge, none of them is available open source. An open source analytical model for C-V2X mode 4 is introduced in [10]. Analytical models for the reliability as a function of the distance between the communication nodes and for different transmission errors that can be encountered in C-V2X mode 4 are presented and validated for a multitude of transmission parameters and traffic densities. A validation of the analytical models by a comparison to simulation results is presented in [11] and [12]. In [11] the performance of C-V2X mode 4 is analyzed for a highway scenario defined by 3GPP [13]. A detailed performance analysis is presented and a modification to the scheduling is proposed. In [12] the performance of C-V2X mode 4 is evaluated for an urban scenario under realistic traffic conditions. Furthermore, it is shown, that the sensing-based Semi-Persistent Scheduling (SPS) scheme improves the performance compared to a random resource selection. The introduced simulator focuses on the evaluation of the sensing-based Semi-Persistent Scheduling of C-V2X mode 4. Another C-V2X simulator is presented in [14]. The authors investigate the influence of resource pool parameters transmission configurations for C-V2X mode 4 on the reliability of the communication. In [15], a performance analysis of the resource allocation of the C-V2X multiple access mechanism is presented. The authors use a simulator based on the ns-3 LTE module to evaluate the system level performance. They conclude, that optimum performance can be achieved if unified system configurations for C-V2X are mandated, as it is for IEEE 802.11p. A comparison of the aforementioned work among each other and to the results of our work is difficult, as different performance metrics, different scenarios or different simulation configurations are used and the reasons for varying results can not be identified due to the lack of insight in the simulator implementations. To allow for open research our simulator is published open source111https://github.com/FabianEckermann/ns-3_c-v2x to be validated, used and improved by other researchers. A first usage of the simulator is presented in [16]. A lightweight framework for integrated simulation of aerial and ground-based vehicular networks is shown and the performance of LTE and C-V2X for connecting the ground- and air-based vehicles is compared.

In the remainder of this paper, we build upon this motivation and give a short overview over the principles of C-V2X communication and our performance criteria (Section II). In Section III, the system design and the simulation parameters of our C-V2X simulator and the implemented channel model used for our simulations are explained. Section IV contains the simulation results of different case studies and we finally conclude the paper in Section V.

In this section a short overview of the relevant C-V2X background is given and the performance criteria used in this paper are described.

For C-V2X mode 4, sensing-based Semi-Persistent Scheduling (SPS) is introduced as distributed scheduling protocol by 3GPP, to autonomously select radio resources. The protocol takes advantage of the periodic and predictable nature of V2X communication services. With sensing-based SPS V-UEs (Vehicular User Equipment) reserve subchannels in the frequency domain for a random number of consecutive periodic transmissions. The number of reserved subchannels per subframe depends on the size of data to be transmitted.

A timeline of the resource allocation mechanism is illustrated in Fig. 2. A V-UEs resource selection (or reselection) at time n

T1) depends on the V-UEs configuration while the upper bound is defined by the maximum Packet Inter-Reception time allowed for the type of transmission. If all resources are occupied the V-UE will transmit on occupied resources with low received power, as the importance of vehicular communication services is highly related to its direct surrounding. After a resource is selected, the V-UE will transmit periodic messages. The transmission interval is defined by the Resource Reservation Period. After using the resource for 5 to 15 transmissions a resource reselection based on the Resource Reselection Probability (in the interval of [0.2, 1]) is triggered.

For the validation of the simulation results the Packet Reception Ratio (PRR) and Packet Inter-Reception (PIR) as specified in [13] are used.

The transmission latency is not considered within this work. The propagation delay for the specified C-V2X effective distances of 320 m (freeway/motorway) [17] is ≈1 μs. Further delays due to processing times are not included in the simulations.

Our C-V2X simulator is based on the LTE Device-to-Device communication simulation model for the ns-3 network simulator introduced and validated in [18]. It includes mode 1 and mode 2 direct communication and in this work C-V2X Mode 4 has been added to the ns-3 simulator. We implemented the adjacent and non-adjacent Resource Block (RB) assignment schemes and the sensing-based SPS. Vehicular traffic is simulated by the microscopic traffic simulator SUMO [19]. For the mobility simulation of the vehicular traffic two scenarios are used. A static worst case scenario where all vehicles are placed on a 100 m x 100 m intersection such that all transmitted packets will be received by all vehicles, (see Fig. 3) and an urban Manhattan grid scenario as used by 3GPP [13], shown in Fig. 4. Unless otherwise noted, the simulation parameters are set as listed by TABLE I. In addition, the WINNER+ B1 has been added to the ns-3 simulator in order to align with the 3GPP studies and to achieve comparable results.

The effective breakpoint distance d′BP is calculated by:

V2X communication must be scalable to guarantee road safety even for inner city scenarios with massive traffic volume. Fig. 5 shows the outcome of a scalability analysis for a static scenario and the 3GPP reference Manhattan grid. In the static scenario with 10 MHz cellular bandwidth the LTE Rel. 14 requirements [17] can be fulfilled for up to  250 vehicles. This is a worst case scenario, as all of the up to 250 vehicles are always in communication range of each other, so the communication channel is loaded. If the cellular bandwidth is doubled even for 250 vehicles a packet reception ratio of ca. 98 % is achieved. For a more realistic, dynamic scenario on a bigger playground the packet reception ratio is even for 250 vehicles and cellular bandwidths of 10 MHz and 20 MHz at around 99 %, as only several vehicles are within the communication range of other vehicles. Another important performance indicator used by 3GPP is the Packet Inter-Reception (PIR). This is analyzed for an increasing number of vehicles in Fig. LABEL:fig:pir_static for the static worst case scenario and in Fig. LABEL:fig:pir_urban for the dynamic Manhattan grid scenario. The PIR depends on the Resource Reservation Period that is set to 100 ms. Lower PIR times occur if new resources are selected by the vehicle. The resulting PIR values of new resources are selected are within the range of the selection window T1−T2

In this paper we introduced and evaluated an open source C-V2X mode 4 simulator implemented in ns-3. We analyzed the performance of our simulator using the performance criteria of the Packet reception Ratio and the Packet Inter-Reception. Our simulation results show that C-V2X mode 4 is highly scalable even for worst case scenarios. Within more realistic scenarios the performance is even better and above the 3GPP rel. 14 V2X requirements. We also analyzed the impact of the Resource Reservation Period and the Resource Reselection Probability on the system performance. Further work is underway regarding a further implementation of C-V2X mode 3 and simulations using real world scenarios. We look forward to see researchers testing, using and improving this simulator to gather further knowledge and advance.

The work on this paper has been partially funded by the federal state of Northrhine-Westphalia and the “European Regional Development Fund” (EFRE) 2014-2020 in the course of the InVerSiV project under grant number EFRE-0800422 and by Deutsche Forschungsgemeinschaft (DFG) within the Collaborative Research Center SFB 876 project B4.