The performance of deep network learning strongly depends on the choice of the non-linear activation function associated with each neuron. However, deciding on the best activation is non-trivial and the choice depends on the architecture, hyper-parameters, and even on the dataset. Typically these activations are fixed by hand before training. Here, we demonstrate how to eliminate the reliance on first picking fixed activation functions by using flexible parametric rational functions instead. The resulting Padé Activation Units (PAUs) can both approximate common activation functions and also learn new ones while providing compact representations. Our empirical evidence shows that end-to-end learning deep networks with PAUs can increase the predictive performance and reduce the training time of common deep architectures. Moreover, PAUs pave the way to approximations with provable robustness. The source code can be found at https://github.com/ml-research/pau 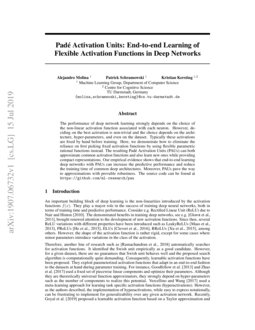 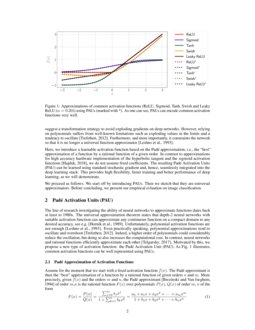 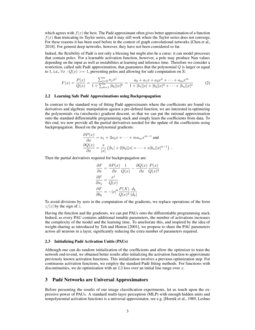 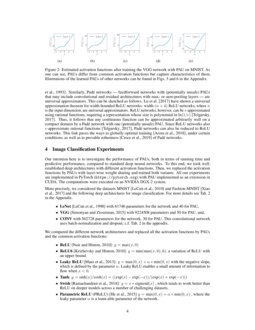 The Quest for the Golden Activation Function

Deep Neural Networks have been shown to be beneficial for a variety of t...
Mina Basirat, et al. ∙

This submission has been withdrawn by arXiv administrators because it is...
Cheng-Yang Fu, et al. ∙

Official and maintained implementation of the paper "Attention-Based Transformers for Instance Segmentation of Cells in Microstructures" [BIBM 2020].

Rational Networks in Supervized Learning such as MNIST, CIFAR and Imagenet Classification

. They play a mayor role in the success of training deep neural networks, both in terms of training time and predictive performance. Consider e.g. Rectified Linear Unit (ReLU) due to

Nair and Hinton [2010]. The demonstrated benefits in training deep networks, see e.g. [Glorot et al., 2011], brought renewed attention to the development of new activation functions. Since then, several ReLU variations with different properties have been introduced such as LeakyReLUs [Maas et al., 2013], PReLUs [He et al., 2015], ELUs [Clevert et al., 2016], RReLUs [Xu et al., 2015], among others. However, the shape of the activation function is rather rigid, except for some cases where minor parameters introduce variations in the class of the activation.

Therefore, another line of research such as [Ramachandran et al., 2018] automatically searches for activation functions. It identified the Swish unit empirically as a good candidate. However, for a given dataset, there are no guarantees that Swish unit behaves well and the proposed search algorithm is computationally quite demanding. Consequently, learnable activation functions have been proposed. They exploit parameterized activation functions that adapt in an end-to-end fashion to the datasets at hand during parameter training. For instance, Goodfellow et al. [2013] and Zhao et al. [2017] used a fixed set of piecewise linear components and optimize their parameters. Although they are theoretically universal function approximators, they strongly depend on hyper-parameters such as the number of components to realize this potential. Vercellino and Wang [2017] used a meta-learning approach for learning task specific activation functions (hyperactivations). However, as the authors described, the implementation of hyperactivations, while easy to express notationally, can be frustrating to implement for generalizability over any given activation network. Recently, Goyal et al. [2019] proposed a learnable activation function based on a Taylor approximation and suggest a transformation strategy to avoid exploding gradients on deep networks. However, relying on polynomials suffers from well-known limitations such as exploding values in the limits and a tendency to oscillate [Trefethen, 2012]. Furthermore, and more importantly, it constraints the network so that it is no longer a universal function approximator [Leshno et al., 1993].

Here, we introduce a learnable activation function based on the Padé approximation, i.e., the “best” approximation of a function by a rational function of a given order. In contrast to approximations for high accuracy hardware implementation of the hyperbolic tangent and the sigmoid activation functions [Hajduk, 2018], we do not assume fixed coefficients. The resulting Padé Activation Units (PAU) can be learned using standard stochastic gradient and, hence, seamlessly integrated into the deep learning stack. This provides high flexibility, faster training and better performance of deep learning, as we will demonstrate.

We proceed as follows. We start off by introducing PAUs. Then we sketch that they are universal approximators. Before concluding, we present our empirical evluation on image classification.

which agrees with f(x) the best. The Padé approximant often gives better approximation of a function f(x) than truncating its Taylor series, and it may still work where the Taylor series does not converge. For these reasons it has been used before in the context of graph convolutional networks [Chen et al., 2018]. For general deep networks, however, they have not been considered so far.

Indeed, the flexibility of Padé is not only a blessing but might also be a curse: it can model processes that contain poles. For a learnable activation function, however, a pole may produce Nan values depending on the input as well as instabilities at learning and inference time. Therefore we consider a restriction, called safe Padé approximation, that guarantees that the polynomial Q is larger or equal to 1, i.e., ∀x:Q(x)>=1, preventing poles and allowing for safe computation on R:

In contrast to the standard way of fitting Padé approximants where the coefficients are found via derivatives and algebraic manipulation against a pre-defined function, we are interested in optimizing the polynomials via (stochastic) gradient descent, so that we can put the rational approximation onto the standard differentiable programming stack and simply learn the coefficients from data. To this end, we now provide all the partial derivatives needed for the update of the coefficients using backpropagation. Based on the polynomial gradients:

Then the partial derivatives required for backpropagation are:

To avoid divisions by zero in the computation of the gradients, we replace operations of the form z/|z| by the sign of z.

Having the function and the gradients, we can put PAUs onto the differentiable programming stack. Indeed, as every PAU contains additional tunable parameters, the number of activations increases the complexity of the model and the learning time. To ameliorate this, and inspired by the idea of weight-sharing as introduced by Teh and Hinton [2001], we propose to share the PAU parameters across all neurons in a layer, significantly reducing the extra number of parameters required.

Before presenting the results of our image classification experiments, let us touch upon the expressive power of PAUs. A standard multi-layer perceptron (MLP) with enough hidden units and nonpolynomial activation functions is a universal approximator, see e.g.

[Hornik et al., 1989, Leshno et al., 1993]. Similarly, Padé networks — feedforward networks with (potentially unsafe) PAUs that may include convolutional and residual architectures with max- or sum-pooling layers — are universal approximators. This can be sketched as follows. Lu et al. [2017] have shown a universal approximation theorem for width-bounded ReLU networks: width-(n+4) ReLU networks, where n is the input dimension, are universal approximators. ReLU networks, however, can be ϵ-approximated using rational functions, requiring a representation whose size is polynomial in ln(1/ϵ) [Telgarsky, 2017]. Thus, it follows that any continuous function can be approximated arbitrarily well on a compact domain by a Padé network with one (potentially unsafe) PAU. Since ReLU networks also ϵ-approximate rational functions [Telgarsky, 2017], Padé networks can also be reduced to ReLU networks. This link paves the ways to globally optimal training [Arora et al., 2018], under certain conditions, as well as to provable robustness [Croce et al., 2019] of Padé networks.

Our intention here is to investigate the performance of PAUs, both in terms of running time and predictive performance, compared to standard deep neural networks. To this end, we took well-established deep architectures with different activation functions. Then, we replaced the activation functions by PAUs with layer-wise weight sharing and trained both variants. All our experiments are implemented in PyTorch (

https://pytorch.org) with PAU implemented as an extension in CUDA. The computations were executed on an NVIDIA DGX-2 system.

The parameters of the networks, both the layer weights and the coefficients of the PAUs, were trained over 100 epochs using Adam

[Kingma and Ba, 2015] with a learning rate of 0.002 or SGD [Qian, 1999] with a learning rate of 0.01. In all experiments we used a batch size of 256 samples. The weights of the networks were initialized randomly and the coefficients of the PAUs were initialized with the initialization constants of Leaky ReLU, see Tab. 3. We report the mean of 5 different runs for both the accuracy on the test-set and the loss on the train-set after each training epoch.

4.1 Results on MNIST and Fashion-MNIST Benchmarks

As can be seen in Fig. 3 and Fig. 4, PAU consistently outperforms the baseline activations on every network in terms of predictive performance and training speed. Furthermore, PAUs also enable the networks to achieve a lower loss during training compared to all baselines on all networks, see second column of Fig. 3 and Fig. 4. These results are more prominent both on the VGG network and even more so on our own defined network (CONV), which achieves the best performance of all networks.

4.2 Illustration of the Activation Functions learned by PAUs

PS and KK acknowedge the supported by funds of the German Federal Ministry of Food and Agriculture (BMEL) based on a decision of the Parliament of the Federal Republic of Germany via the Federal Office for Agriculture and Food (BLE) under the innovation support program, FKZ 2818204715.

As show in Table 3 we compute initial coefficients for PAU approximations to different known activation functions. We predefined the orders to be [5,4] and for Sigmoid, Tanh and Swish, we have computed the Padé approximant using the standard techniques. For the different variants of PRelu, LeakyRelu and Relu we optimized the coefficients using least squares over the line range between [-3,3] in steps of 0.000001.

A visualization of the different approximations can be found in Fig. 1.

Appendix C Illustration of the Activation Functions learned by PAUs

When looking at the activation functions learned from the data, we can clearly see similarities to standard functions. In particular, we can see in Fig. 5 and Fig. 6 that many learned activations seem to be smoothed versions of Leaky ReLUs. Consider that piecewise V-shaped activation function are simply Leaky ReLUs with negative α values. Furthermore, we see that unlike the standard activations, PAUs also choose to move the center of what would be the the piecewise transition in the ReLU family. As shown in Fig. 5j, the transition between the two ”linear” modes is negative. However, this can only be achieved by a Leaky ReLU with a negative α and then applying a shifting to the right, a non-standard procedure.