We consider the speed planning problem for a robotic manipulator. In particular, we present an algorithm for finding the time-optimal speed law along an assigned path that satisfies velocity and acceleration constraints and respects the maximum forces and torques allowed by the actuators. The addressed optimization problem is a finite dimensional reformulation of the continuous-time speed optimization problem, obtained by discretizing the speed profile with N points. The proposed algorithm has linear complexity with respect to N and to the number of degrees of freedom. Such complexity is the best possible for this problem. Numerical tests show that the proposed algorithm is significantly faster than algorithms already existing in literature. 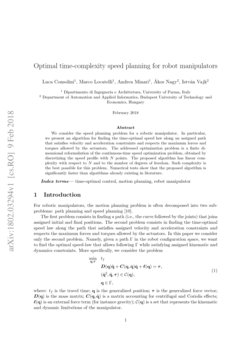 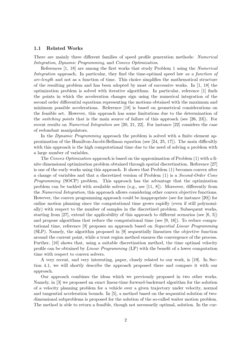 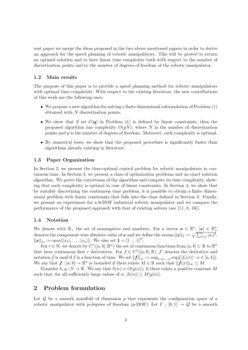 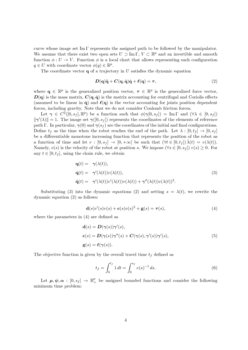 The first problem consists in finding a path (i.e., the curve followed by the joints) that joins assigned initial and final positions. The second problem consists in finding the time-optimal speed law along the path that satisfies assigned velocity and acceleration constraints and respects the maximum forces and torques allowed by the actuators. In this paper we consider only the second problem. Namely, given a path Γ in the robot configuration space, we want to find the optimal speed-law that allows following Γ while satisfying assigned kinematic and dynamics constraints. More specifically, we consider the problem

where: tf is the travel time; q is the generalized position; τ

is the generalized force vector;

D(q) is the mass matrix; C(q,˙q) is a matrix accounting for centrifugal and Coriolis effects; ℓ(q) is an external force term (for instance gravity); C(q) is a set that represents the kinematic and dynamic limitations of the manipulator.

References Bobrow, Dubowsky, and Gibson (1985); Pfeiffer and Johanni (1987) are among the first works that study Problem 1 using the Numerical Integration approach. In particular, they find the time-optimal speed law as a function of arc-length and not as a function of time. This choice simplifies the mathematical structure of the resulting problem and has been adopted by most of successive works. In Bobrow, Dubowsky, and Gibson (1985); Pfeiffer and Johanni (1987) the optimization problem is solved with iterative algorithms. In particular, reference Bobrow, Dubowsky, and Gibson (1985) finds the points in which the acceleration changes sign using the numerical integration of the second order differential equations representing the motions obtained with the maximum and minimum possible accelerations. Reference Pfeiffer and Johanni (1987) is based on geometrical considerations on the feasible set. However, this approach has some limitations due to the determination of the switching points that is the main source of failure of this approach (see Slotine and Yang (1989); Shiller and Lu (1992)). For recent results on Numerical Integration see Pham (2014); Pham, Caron, and Nakamura (2013); Pham and Stasse (2015). For instance Pham and Stasse (2015) considers the case of redundant manipulators.

In the Dynamic Programming approach the problem is solved with a finite element approximation of the Hamilton-Jacobi-Bellman equation (see Shin and McKay (1986); Singh and Leu (1987); Oberherber, Gattringer, and Müller (2015)). The main difficultly with this approach is the high computational time due to the need of solving a problem with a large number of variables.

The Convex Optimization approach is based on the approximation of Problem (1) with a finite dimensional optimization problem obtained through spatial discretization. Reference Verscheure, Demeulenaere, Swevers, Schutter, and Diehl (2009) is one of the early works using this approach. It shows that Problem (1) becomes convex after a change of variables and that a discretized version of Problem (1) is a Second-Order Cone Programming (SOCP) problem. This approach has the advantage that the optimization problem can be tackled with available solvers (e.g., see Lipp and Boyd (2014); Gurobi Optimization (2016)). Moreover, differently from the Numerical Integration, this approach allows considering other convex objective functions. However, the convex programming approach could be inappropriate (see for instance Pham (2014)) for online motion planning since the computational time grows rapidly (even if still polynomially) with respect to the number of samples in the discretized problem. Subsequent works, starting from Verscheure, Demeulenaere, Swevers, Schutter, and Diehl (2009), extend the applicability of this approach to different scenarios (see Debrouwere, Van Loock, Pipeleers, Dinh, Diehl, De Schutter, and Swevers (2013); Csorvási, Nagy, and Vajk (2017)) and propose algorithms that reduce the computational time (see Hauser (2014); Nagy and Vajk (2018)). To reduce computational time, reference Hauser (2014) proposes an approach based on

(SLP). Namely, the algorithm proposed in Hauser (2014) sequentially linearizes the objective function around the current point, while a trust region method ensures the convergence of the process. Further, Nagy and Vajk (2018) shows that, using a suitable discretization method, the time optimal velocity profile can be obtained by Linear Programming (LP) with the benefit of a lower computation time with respect to convex solvers.

A very recent, and very interesting, paper, closely related to our work, is Pham and Pham (2017). In Section 4.1, we will shortly describe the approach proposed there and compare it with our approach.

Our approach combines the ideas which we previously proposed in two other works. Namely, in Consolini, Locatelli, Minari, and Piazzi (2017a) we proposed an exact linear-time forward-backward algorithm for the solution of a velocity planning problem for a vehicle over a given trajectory under velocity, normal and tangential acceleration bounds. In Csorvási, Nagy, and Vajk (2017), a method based on the sequential solution of two-dimensional subproblems is proposed for the solution of the so-called waiter motion problem. The method is able to return a feasible, though not necessarily optimal, solution. In the current paper we merge the ideas proposed in the two above mentioned papers in order to derive an approach for the speed planning of robotic manipulators. This will be proved to return an optimal solution and to have linear time complexity both with respect to the number of discretization points and to the number of degrees of freedom of the robotic manipulator.

The purpose of this paper is to provide a speed planning method for robotic manipulators with optimal time complexity. With respect to the existing literature, the new contributions of this work are the following ones.

In Section 2, we present the time-optimal control problem for robotic manipulators in continuous time. In Section 3, we present a class of optimization problems and an exact solution algorithm. We prove the correctness of the algorithm and compute its time complexity, showing that such complexity is optimal in case of linear constraints. In Section 4, we show that by suitably discretizing the continuous time problem, it is possible to obtain a finite dimensional problem with linear constraints that falls into the class defined in Section 3. Finally, we present an experiment for a 6-DOF industrial robotic manipulator and we compare the performance of the proposed approach with that of existing solvers (see Lipp and Boyd (2014); Gurobi Optimization (2016); Nagy and Vajk (2018)).

Let Q be a smooth manifold of dimension p that represents the configuration space of a robotic manipulator with p-degrees of freedom (p-DOF). Let Γ:[0,1]→Q be a smooth curve whose image set ImΓ represents the assigned path to be followed by the manipulator. We assume that there exist two open sets U⊃ImΓ, V⊂Rp and an invertible and smooth function ϕ:U→V. Function ϕ is a local chart that allows representing each configuration q∈U with coordinate vector ϕ(q)∈Rp.

, using the chain rule, we obtain

where the parameters in (4) are defined as

) specify the interpolation conditions at the beginning and at the end of the path.

The following assumption is a basic requirement for fulfilling constraint (12).

Next assumption requires that the maximum allowed generalized forces are able to counteract external forces (such as gravity) when the manipulator is fixed at each point of Γ.

Problem 1 is nonconvex, but it becomes convex after a simple change of variables (as previously noted in Verscheure, Demeulenaere, Swevers, Schutter, and Diehl (2009)). Indeed, (∀s∈[0,sf]) set

where the squares of the two vectors γ′(s) and ψ(s) in (23) are to be intended component-wise. Problem 2 is convex since the objective function (18) is convex and the constraints (19)-(25) are linear.

The following proposition (that will be proved in the appendix) shows that Problem 2 admits a solution.

where U is a constant depending on problem data.

We do not directly solve Problem 2, but find an approximated solution based on a finite dimensional approximation. Namely, consider the following problem, obtained by uniformly sampling the interval [0,sf] in n points  s1, s2,…,sn from s1=0 to sn=sf :

Thank to constraints (28)-(30), it is possible to eliminate variables τi and ai and use only bi, with i=1,…,n, as decision variables. The feasible set of Problem 3 is a non-empty set since b=0 is a feasible solution (in fact, it also has a nonempty interior).

Since Problem 3 is convex, we can easily find a solution with an interior point method (see Verscheure, Demeulenaere, Swevers, Schutter, and Diehl (2009)).

The following proposition, whose proof is presented in appendix, defines the interpolating quadratic spline fulfilling (36).

For any b∈Rn, there exists a unique element p∈P such that the following interpolation conditions hold

Note that p is continuously differentiable and that (36) holds. Such element will be denoted by Ib.

Note that by Proposition 2, there exists a unique function b=Ib that interpolates the solution of Problem 3. Then a and τ are computed from b by using relations (17) and (19), namely we set (∀s∈[0,sf])

3 Solution algorithms and complexity issues for the generalized problem

In this section we present an optimal time complexity algorithm that solves a specific class of optimization problems. In the subsequent section we will show that Problem 2 can be approximated by a finite dimensional problem that belongs to this class.

3.1 Exact algorithm for the solution of some special structured problems

The problems under consideration have the form

where we make the following assumptions.

The constraints in (38) can be rewritten in compact form as follows:

Note that Fi and Bi are both concave and increasing over R+, since they are the minimum of a finite number of functions with the same properties. We prove that the same holds for Fi∘Bi.

Fi∘Bi is increasing and concave over R+.

The fact that Fi∘Bi is increasing follows immediately from the increasingness of Fi and Bi. For what concerns concavity, ∀x,y≥0, λ∈[0,1]:

It immediately follows that:

We consider Algorithm 1 for the solution of problem (38).

The algorithm is correct, as stated in the following proposition.

We first remark that at each iteration ¯u≥v∗ holds. If a fixed point ¯vi+1 for Fi∘Bi exists, then after the backward propagation, ¯ui+1≤¯vi+1, and ¯ui=min{¯uoldi,Bi(¯ui+1)}, where ¯uoldi denotes the upper bound for vi after the forward phase. We show that

from which the result is proved. Otherwise, if no fixed point exists,

form which the result is still proved. ∎

Under a given condition, Algorithm 1 can be further simplified.

If Fi and Bi, i=1,…,n, fulfill the so called superiority condition, i.e.

then ¯vi,¯vi+1=+∞ and the forward phase can be reduced to

3.2 Solving the subproblems in the forward phase and complexity results

We first remark that

Alternatively, ¯ui,¯ui+1 can also be detected as fixed points of B¯ui∘F¯ui and F¯ui∘B¯ui, respectively, where

Although any convex optimization or any fixed point solver could be exploited for detecting these values, we propose the simple Algorithm 2, which turns out to be quite effective in practice. We denote by

We illustrate how the algorithm works through an example.

In the second iteration we have

In the third iteration we have