In this paper, we introduce OpenVSLAM, a visual SLAM framework with high usability and extensibility. Visual SLAM systems are essential for AR devices, autonomous control of robots and drones, etc. However, conventional open-source visual SLAM frameworks are not appropriately designed as libraries called from third-party programs. To overcome this situation, we have developed a novel visual SLAM framework. This software is designed to be easily used and extended. It incorporates several useful features and functions for research and development. OpenVSLAM is released at https://github.com/xdspacelab/openvslam under the 2-clause BSD license. 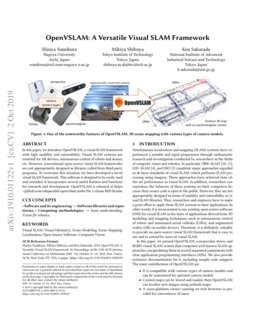 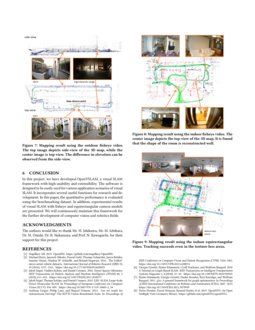 Extensive research in the field of Visual SLAM for the past fifteen year...
Georges Younes, et al. ∙

Simultaneous localization and mapping (SLAM) systems have experienced a notable and rapid progression through enthusiastic research and investigation conducted by researchers in the fields of computer vision and robotics. In particular, ORB–SLAM (Mur-Artal et al., 2015; Mur-Artal and Tardós, 2017), LSD–SLAM (Engel et al., 2014), and DSO (Engel et al., 2018) constitute major approaches regarded as de facto standards of visual SLAM, which performs SLAM processing using imagery. These approaches have achieved state-of-the-art performance as visual SLAM. In addition, researchers can reproduce the behavior of these systems on their computers because their source code is open to the public. However, they are not appropriately designed in terms of usability and extensibility as visual SLAM libraries. Thus, researchers and engineers have to make a great effort to apply those SLAM systems to their applications. In other words, it is inconvenient to use existing open-source software (OSS) for visual SLAM as the basis of applications derived from 3D modeling and mapping techniques, such as autonomous control of robots and unmanned aerial vehicles (UAVs), and augmented reality (AR) on mobile devices. Therefore, it is definitely valuable to provide an open-source visual SLAM framework that is easy to use and to extend by users of visual SLAM.

In this paper, we present OpenVSLAM, a monocular, stereo, and RGBD visual SLAM system that comprises well-known SLAM approaches, encapsulating them in several separated components with clear application programming interfaces (APIs). We also provide extensive documentation for it, including sample code snippets. The main contributions of OpenVSLAM are

One of the noteworthy features of OpenVSLAM is that the system can deal with various types of camera models, such as perspective, fisheye, and equirectangular, as shown in Figure 1. AR on mobile devices such as smartphones needs a SLAM system with a regular perspective camera. Meanwhile, fisheye cameras are often mounted on UAVs and robots for visual SLAM and scene understanding because they have a wider field of view (FoV) than perspective cameras. OpenVSLAM can be used with almost the same implementation between perspective and fisheye camera models. In addition, it is a significant contribution that equirectangular images can constitute inputs to our SLAM system. By using cameras that can capture omnidirectional imagery, the tracking performance of SLAM can be improved. Our efforts to make use of equirectangular images for visual SLAM enable tracking and mapping not to depend on the direction of a camera. Furthermore, OpenVSLAM provides interfaces that can be employed for applications and researches that use visual SLAM. For example, our SLAM system incorporates interfaces to store and load a map database and a localization function based on a prebuilt map.

We contribute to the community of computer vision and robotics by providing this SLAM framework with a more lax OSS license than most of the conventional visual SLAM frameworks, as shown in Table 1. Additionally, we continuously maintain the software so that researchers can jointly contribute to its development. Our code is released at https://github.com/xdspacelab/openvslam.

In this section, mapping and localization techniques whose programs are released as OSS are briefly described. Such techniques are essential in a wide variety of application scenarios for autonomous control of UAVs and robots, AR on mobile devices, etc. Some OSS packages for those tasks using images have been open to the public.

Structure from motion (SfM) and visual SLAM are often employed as scene modeling techniques based on imagery. Regarding SfM, it is usually assumed that the entire image set is prepared in advance. Then the algorithm performs 3D reconstruction via batch processing. Concerning visual SLAM, 3D reconstruction is processed in real-time. Therefore, it assumes that images are sequentially input. OpenMVG (Moulon et al., 2019), Theia (Sweeney et al., 2015), OpenSfM (AB, 2019), and COLMAP (Schönberger and Frahm, 2016) are well-known OSS packages for SfM. Some SfM frameworks (Moulon et al., 2019; AB, 2019) are capable of dealing with fisheye and equirectangular imagery. The compatibility with such images has improved the performance and usability of SfM packages as 3D modeling frameworks. Meanwhile, researchers often use visual SLAM, such as ORB–SLAM (Mur-Artal et al., 2015; Mur-Artal and Tardós, 2017), LSD–SLAM (Engel et al., 2014), and DSO (Engel et al., 2018), for real-time 3D mapping. Unlike some SfM frameworks, most of the visual SLAM software programs can only handle perspective imagery. In our case, inspired by the aforementioned SfM frameworks, we do provide a novel visual SLAM framework compatible with various types of camera models. We thus aim at improving usability and extensibility of visual SLAM for 3D mapping and localization.

Some visual SLAM programs are introduced and some of their features are explained in this section. Table 1 compares characteristics of well-known visual SLAM frameworks with our OpenVSLAM.

is used for keypoint detection. The binary vector

(Rublee et al., 2011) is then used for its descriptor. Quick methods that can extract keypoints and match feature vectors enable visual SLAM algorithms to be processed in real-time. Similar approaches are employed in ProSLAM (Schlegel et al., 2018), which is the simple visual SLAM framework for perspective stereo and RGBD camera systems. UcoSLAM (Muñoz-Salinas and Medina Carnicer, 2019) adopts an algorithm that combines artificial landmarks, such as squared fiducial markers, and binary descriptor used by ORB–SLAM and ProSLAM. Meanwhile, LSD–SLAM (Engel et al., 2014) and DSO (Engel et al., 2018) are two different approaches of direct SLAM, which realizes visual SLAM processing directly exploiting brightness information of each pixel in images. It should be noted that the direct method does not have to explicitly extract any keypoints from images. Unlike the indirect method, the direct method can be correctly operated in more texture-less environments because it utilizes whole information from images. However, the direct method presents more susceptibility to changes in lighting conditions. Additionally, it has been reported that the direct method achieves lower performance than the indirect one when using rolling shutter cameras (Engel et al., 2014, 2018). Given that image sensors in smartphones and consumer cameras are rolling shutter, OpenVSLAM adopts the indirect method for visual SLAM.

Most of the visual SLAM frameworks cannot store and load map databases, as highlighted in Table 1. Localization based on a prebuilt map is important in practical terms for a lot of application. Accordingly, it is clear that the ability to store and load created maps improves the usability and extensibility of a visual SLAM framework. Therefore, functions for I/O of map databases are implemented in OpenVSLAM.

for I/O operation of images and feature extraction, and g2o

(Kümmerle et al., 2011) for map optimization. In addition, extensive documentation including sample code snippets is provided. Users can employ these snippets for their programs.

The software of OpenVSLAM is roughly divided into three modules, as shown in Figure 2

OpenVSLAM can accept images captured with perspective, fisheye, and equirectangular cameras. In regard to perspective and fisheye camera models, the framework is compatible not only with monocular but also with stereo and RGBD setups. Additionally, users can easily add new camera models (e.g., dual fisheye and catadioptric) by implementing new camera model classes derived from a base class camera::base. This is a great advantage compared to other SLAM frameworks because new camera models can be implemented easily.

As opposed to most of the visual SLAM frameworks, OpenVSLAM has functions to store and load map information, as shown in Table 1. In addition, users can localize new frames based on a prebuilt map. The map database is stored in MessagePack format, hence the map information can be reused for any third-party applications in addition to OpenVSLAM.

In this section, tracking accuracy of OpenVSLAM is evaluated using EuRoC MAV dataset (Burri et al., 2016) and KITTI Odomery dataset (Geiger et al., 2012), both of which have ground-truth trajectories. ORB–SLAM2 (Mur-Artal and Tardós, 2017), the typical indirect SLAM, is selected for comparison. In addition to tracking accuracy, tracking times are also compared.

Figure 3 shows ATEs on the 11 sequences of EuRoC MAV dataset. From the graph, it is found that OpenVSLAM is comparable to ORB–SLAM with respect to tracking accuracy for UAV-mounted cameras. Concerning the sequences including dark scenes (MH_04 and MH_05), the trajectories estimated with OpenVSLAM are more accurate than that with ORB–SLAM. This is mainly because frame tracking method based on robust matching is additionally implemented in OpenVSLAM.

Subsequently, tracking times measured using the MH_02 sequence of EuRoC MAV dataset are shown in Figure 4. Mean and median tracking times are presented in the table as well. From the table, it is found that OpenVSLAM consumes less tracking time than ORB–SLAM. This is mainly because the implementation of ORB extraction in OpenVSLAM is more optimized than that in ORB–SLAM. In addition, it should be noted that OpenVSLAM requires less tracking time than ORB–SLAM in later parts of the sequence as shown in the graph. This is because OpenVSLAM efficiently prevents a local map from being enlarged in the tracking module when a global map is expanded.

Figure 5 shows ATEs on the 11 sequences of KITTI Odometry dataset. From the graph, it is found that OpenVSLAM has comparable performance to ORB–SLAM with respect to tracking accuracy for car-mounted cameras.

In this section, experimental results of visual SLAM with a fisheye camera are presented both outdoors and indoors. A LUMIX DMC-GX8 which equips an 8mm fisheye lens (Panasonic Corp.) is used for capturing image sequences. The FPS of the camera is 30.0.

The 3D map shown in Figure 7 is created with OpenVSLAM using a fisheye video captured outdoor. The number of frames is about 6400. The difference in elevation is observed from the side-view of the 3D map. Also, it should be noted that camera pose tracking succeeded even in high dynamic range scenes.

Figure 8 presents the 3D map built from an indoor fisheye video. The number of frames is about 6700. It is found that the shape of the room is reconstructed clearly. In addition, tracking succeeded even in areas which have less common views (e.g., the right-bottom image of Figure 8).

These results allow us to conclude that visual SLAM with fisheye cameras is correctly performed both outdoors and indoors.

In this section, experimental results of visual SLAM with a THETA V (RICOH Co., Ltd.), a consumer equirectangular camera, are presented.

The 3D map shown in the right half of Figure 1 is created with OpenVSLAM using an equirectangular video captured outdoor. The FPS is 10.0 and the number of frames is 15000. It is found that tracking of camera movement, loop-closing, and global optimization work well even for the large-scale sequence.

Meanwhile, Figure 9 presents the 3D map based on an indoor equirectangular video. In this case, the FPS is 10.0 and the number of frames is 1430. It should be noted that the camera poses are correctly tracked even in texture-less areas thanks to omnidirectional observation.

These results allow us to conclude that visual SLAM with equirectangular cameras is correctly performed both outdoors and indoors.

In this project, we have developed OpenVSLAM, a visual SLAM framework with high usability and extensibility. The software is designed to be easily used for various application scenarios of visual SLAM. It incorporates several useful functions for research and development. In this paper, the quantitative performance is evaluated using the benchmarking dataset. In addition, experimental results of visual SLAM with fisheye and equirectangular camera models are presented. We will continuously maintain this framework for the further development of computer vision and robotics fields.

The authors would like to thank Mr. H. Ishikawa, Mr. M. Ichihara, Dr. M. Onishi, Dr. R. Nakamura, and Prof. N. Kawaguchi, for their support for this project.