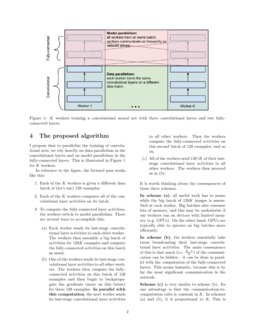 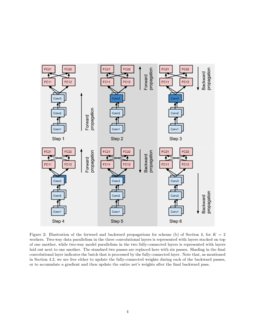 Learning the Representations of Moist Convection with Convolutional Neural Networks

This is meant to be a short note introducing a new way to parallelize the training of convolutional neural networks with stochastic gradient descent (SGD). I present two variants of the algorithm. The first variant perfectly simulates the synchronous execution of SGD on one core, while the second introduces an approximation such that it no longer perfectly simulates SGD, but nonetheless works better in practice.

Convolutional neural networks are big models trained on big datasets. So there are two obvious ways to parallelize their training:

These are called model parallelism and data parallelism, respectively.

Another factor affecting all of this is batch size. We can make data parallelism arbitrarily efficient if we are willing to increase the batch size (because the weight synchronization step is performed once per batch). But very big batch sizes adversely affect the rate at which SGD converges as well as the quality of the final solution. So here I target batch sizes in the hundreds or possibly thousands of examples.

This is precisely what I’m proposing. In the remainder of this note I will explain the scheme in more detail and also mention several nice properties.

In reference to the figure, the forward pass works like this:

The backward pass is quite similar:

The forward and backward propagations for scheme (b) are illustrated in Figure 2 for the case of K=2 workers.

Once the backward pass is complete, the workers can update the weights. In the convolutional layers, the workers must also synchronize the weights (or weight gradients) with one another. The simplest way that I can think of doing this is the following:

It’s pretty hard to implement this step badly because there are so few convolutional weights.

So what we have here in schemes (b) and (c) is a slight modification to the standard forward-backward propagation which is, nonetheless, completely equivalent to running synchronous SGD with a batch size of 128K. Notice also that schemes (b) and (c) perform K forward and backward passes through the fully-connected layers, each time with a different batch of 128 examples. This means that we can, if we wish, update the fully-connected weights after each of these partial backward passes, at virtually no extra computational cost. We can think of this as using a batch size of 128 in the fully-connected layers and 128K in the convolutional layers. With this kind of variable batch size, the algorithm ceases to be a pure parallelization of SGD, since it no longer computes a gradient update for any consistent model in the convolutional layers. But it turns out that this doesn’t matter much in practice. As we take the effective batch size, 128K, into the thousands, using a smaller batch size in the fully-connected layers leads to faster convergence to better minima.

The first question that I investigate is the accuracy cost of larger batch sizes. This is a somewhat complicated question because the answer is dataset-dependent. Small, relatively homogeneous datasets benefit from smaller batch sizes more so than large, heterogeneous, noisy datasets. Here, I report experiments on the widely-used ImageNet 2012 contest dataset (ILSVRC 2012)

(Deng et al., 2009). At 1.2 million images in 1000 categories, it falls somewhere in between the two extremes. It isn’t tiny, but it isn’t “internet-scale” either. With current GPUs (and CPUs) we can afford to iterate through it many times when training a model.

The model that I consider is a minor variation on the winning model from the ILSVRC 2012 contest (Krizhevsky et al., 2012). The main difference is that it consists of one “tower” instead of two. This model has 0.2% more parameters and 2.4% fewer connections than the two-tower model. It has the same number of layers as the two-tower model, and the (x,y) map dimensions in each layer are equivalent to the (x,y) map dimensions in the two-tower model. The minor difference in parameters and connections arises from a necessary adjustment in the number of kernels in the convolutional layers, due to the unrestricted layer-to-layer connectivity in the single-tower model.111In detail, the single-column model has 64, 192, 384, 384, 256 filters in the five convolutional layers, respectively.

222This is not an important point with only 1000 classes. But with tens of thousands of classes, the cost of normalization becomes noticeable.

I trained all models for exactly 90 epochs, and multiplied the learning rate by

The weight update rule that I used was

When experimenting with different batch sizes, one must decide how to adjust the hyperparameters

μ,ω, and ϵ. It seems plausible that the smoothing effects of momentum may be less necessary with bigger batch sizes, but in my experiments I used μ=0.9 for all batch sizes. Theory suggests that when multiplying the batch size by k, one should multiply the learning rate ϵ by √k

to keep the variance in the gradient expectation constant. How should we adjust the weight decay

so we want to pick ω′ such that

Theory aside, for the batch sizes considered in this note, the heuristic that I found to work the best was to multiply the learning rate by

k when multiplying the batch size by k. I can’t explain this discrepancy between theory and practice333This heuristic does eventually break down for batch sizes larger than the ones considered in this note.. Since I multiplied the learning rate ϵ by k instead of √k, and the total weight decay coefficient is ϵ′ω′, I used ω′=ω=0.0005 for all experiments.

The machine on which I performed the experiments has eight NVIDIA K20 GPUs and two Intel 12-core CPUs. Each CPU provides two PCI-Express 2.0 lanes for four GPUs. GPUs which have the same CPU “parent” can communicate amongst themselves simultaneously at the full PCI-Express 2.0 rate (about 6GB/sec) through a PCI-Express switch. Communication outside this set must happen through the host memory and incurs a latency penalty, as well as a throughput penalty of 50% if all GPUs wish to communicate simultaneously.

Table 1 summarizes the error rates and training times of this model using scheme (b) of Section 4. The main take-away is that there is an accuracy cost associated with bigger batch sizes, but it can be greatly reduced by using the variable batch size trick described in Section 4.2. The parallelization scheme scales pretty well for the model considered here, but the scaling is not quite linear. Here are some reasons for this:

6 Comparisons to other work on parallel convolutional neural network training

, the authors use a GPU cluster to train a locally-connected neural network on images. To parallelize training, they exploit the fact that their network is locally-connected but not convolutional. This allows them to distribute workers spatially across the image, and only neuron activations near the edges of the workers’ areas of responsibility need to be communicated. This scheme could potentially work for convolutional nets as well, but the convolutional weights would need to be synchronized amongst the workers as well. This is probably not a significant handicap as there aren’t many convolutional weights. The two other disadvantages of this approach are that it requires synchronization at every convolutional layer, and that with 8 or more workers, each worker is left with a rather small area of responsibility (particularly near the upper layers of the convolutional net), which has the potential to make computation inefficient. Nonetheless, this remains an attractive dimension of parallelization for convolutional neural nets, to be exploited alongside the other dimensions.

The scheme introduced in this note seems like a reasonable way to parallelize the training of convolutional neural networks. The fact that it works quite well on existing model architectures, which have not been adapted in any way to the multi-GPU setting, is promising. When we begin to consider architectures which are more suited to the multi-GPU setting, we can expect even better scaling. In particular, as we scale the algorithm past 8 GPUs, we should:

We can expect some loss of accuracy when training with bigger batch sizes. The magnitude of this loss is dataset-dependent, and it is generally smaller for larger, more varied datasets.