On the Problem of p_1^-1 in Locality-Sensitive Hashing

A Locality-Sensitive Hash (LSH) function is called (r,cr,p_1,p_2)-sensitive, if two data-points with a distance less than r collide with probability at least p_1 while data points with a distance greater than cr collide with probability at most p_2. These functions form the basis of the successful Indyk-Motwani algorithm (STOC 1998) for nearest neighbour problems. In particular one may build a c-approximate nearest neighbour data structure with query time Õ(n^ρ/p_1) where ρ=log1/p_1/log1/p_2∈(0,1). That is, sub-linear time, as long as p_1 is not too small. This is significant since most high dimensional nearest neighbour problems suffer from the curse of dimensionality, and can't be solved exact, faster than a brute force linear-time scan of the database. Unfortunately, the best LSH functions tend to have very low collision probabilities, p_1 and p_2. Including the best functions for Cosine and Jaccard Similarity. This means that the n^ρ/p_1 query time of LSH is often not sub-linear after all, even for approximate nearest neighbours! In this paper, we improve the general Indyk-Motwani algorithm to reduce the query time of LSH to Õ(n^ρ/p_1^1-ρ) (and the space usage correspondingly.) Since n^ρ p_1^ρ-1 < n ⇔ p_1 > n^-1, our algorithm always obtains sublinear query time, for any collision probabilities at least 1/n. For p_1 and p_2 small enough, our improvement over all previous methods can be up to a factor n in both query time and space. The improvement comes from a simple change to the Indyk-Motwani algorithm, which can easily be implemented in existing software packages. 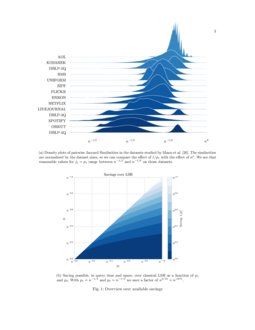 Locality Sensitive-Hashing (LSH) framework [18] is one of the most efficient approaches to the nearest neighbour search problem in high dimensional spaces. It comes with theoretical guarantees, and it has the advantage of easy adaption to nearly any metric or similarity function one might want to search.

The (r1,r2)-near neighbour problem is defined as follows: Given a set X of points, we build a data-structure, such that given a query, q we can quickly find a point x∈X with distance <r2 to q, or determine that X has no points with distance ≤r1 to q. Given a solution to this “gap” problem, one can obtain a r1/r2-approximate nearest neighbour data structure, or even an exact111In general we expect the exact problem to be impossible to solve in sub-linear time, given the hardness results of [5, 1]. However for practical datasets it is often possible. solution using known reductions [2, 14, 17].

For any measure of similarity, the gap problem can be solved by LSH: we find a distribution of functions H, such that p1≥Prh∼H[h(x)=h(y)] when x and y are similar, and p2≤Prh∼H[h(x)=h(y)] when x and y are dissimilar. Such a distribution is called (r1,r2,p1,p2)-sensitive. If p1>p2 the LSH framework gives a data-structure with query time ~O(nρ/p1) for ρ=log1/p1log1/p2, which is usually significantly faster than the alternatives.

At least when p1 is not too small.

for Cosine similarity and MinHash

(which corresponds to near orthogonal vectors) the

1/p1 factor results in a factor d slow-down. For larger τ∈(√2,2] the slow-down can grow arbitrary large. Using dimensionality reduction techniques, like the Johnson Lindenstrauss transform, one may assume d=ε−2logn at the cost of a factor 1+ε distortion of the distances. However if ε is just 1/100, the slow-down factor of d is still worse than, say, n1/2 for datasets of size up to 108, and so if c≤√2 we get that nρ/p1 s larger than n. So worse than a brute force scan of the database!

The MinHash algorithm was introduced by Broder et al. for the Alta Vista search engine, but is used today for similarity search on sets in everything from natural language processing to gene sequencing. MinHash solves the

The improvements to LSH comes from a simple observation: During the algorithm of Indyk and a certain “amplification” procedure has to be applied lognlog1/p2 times. When log1/p2 does not divide n, which is extremely likely, the amount of amplification has to be approximated by the next integer. We propose instead an ensemble of LSH tables with different amounts of amplification, which when analysed sufficiently precisely yields the improvements described above.

We will review various directions in which LSH has been improved and generalized, and how those results related to what is presented in the present article.

In many cases, the time required to sample and evaluate the hash functions dominate the time required by LSH. Recent papers [16, 12] have reduced the number of distinct calls to the hash functions which is needed. The most recent paper in the line of work is [12], which reduces the number of calls to (lognlog1/p2)2/p1. On top of that, however, they still require nρ/p1 work, so the issue with small p1 isn’t touched upon. In fact, some of the some of the algorithms in [12] increase the dependency from nρ/p1 to nρ/(p1−p2).

Other work has sought to generalize the concept of Locality Sensitive Hashing to so-called Locality Sensitive Filtering, LSF [9]. However, the best work for set similarity search based on LSF [4, 13] still have factors similar in spirit to p−11. E.g., the Chosen Path algorithm in [13] uses query time ~O(nρ/b1), where b1 is the similarity between close sets.

A third line of work has sought to derandomize LSH. The result is so-called Las Vegas LSH [3, 22]. Here the families H are built combinatorially, rather than at random, to guarantee the data structure always return a near neighbour, when one exists. While these methods don’t have probabilities, they still end up with similar factors for similar reasons.

As mentioned, the reason p−11 shows up in all these different approaches, is that they all rely on the same amplification procedure, which has to be applied an integer number of times. One might wonder if tree based methods, which do an adaptive amount of amplification, could get rid of the 1/p1 dependency. However as evidenced by the classical and current work [8, 7, 14, 15] these methods still have a factor 1/p1. We leave it open whether this might be avoidable with better analysis, perhaps inspired by the results in this paper.

Before we give the new LSH algorithm, we will recap the traditional analysis. For a more comprehensive introduction to LSH, see the Mining of Massive Datasets book [19], Chapter 3. In the remainder of the article we will use the notation [n]={1,…,n}.

Assume we are given a (r1,r2,p1,p2)-sensitive LSH family, H, as defined in the introduction. Let k and L be some integers defined later, and let [m] be the range of the hash functions, h∈H. Let n be an upper bound on the number of points to be inserted. 222If we don’t know how many points will be inserted, several black box reductions allow transforming LSH into a dynamic data structure. The Indyk-Motwani data-structure consists of L hash tables, each with mk hash buckets.

To insert a point, x, we draw L⋅k functions from H, denoted by (hi,j)i∈[L],j∈[k]. In each table i∈[L] we insert x into the bucket keyed by (hi,1(x),hi,2(x),…,hi,k(x)). Given a query point q, the algorithm iterates over the L tables and retrieves the data points hashed into the same buckets as q. The process stops as soon as a point is found within distance r1 from q.

The algorithm as described has the performance characteristics listed below. Here we assume the hash functions can be sampled and evaluated in constant time. If this is not the case, one can use the improvements discussed in the related work.

To get these bounds, we have defined k=⌈lognlog1/p2⌉ and

It’s clear from this analysis that the p−11 factor is only necessary when lognlog1/p2 is not an integer. However in those cases it is clearly necessary, since there is no obvious way to make a non-integer number of function evaluations. We also cannot round k down instead of up, since the number of false positives would explode: rounding down would result in a factor of p−12 instead of p−11 — much worse.

The main theorem is the following:

For the second equality, we used the definition of κ: pκ2=1/n. We only count the expected number of points seen that are at least r2 away from the query. This is because the algorithm, like classical LSH, terminates as soon as it sees a point with distance less than r2.

Given any point in the database within distance r1 we must be able to find it with high enough probability. This requires that the query and the point shares a hash-bucket in one of the tables. The probability that this is not the case is

For the equality, we used the definition of κ and ρ: pκ1=pρκ2=n−ρ. For the last inequality we have assumed p2>1/n so ⌊κ⌋≥1, and that p1<1/2, since otherwise we could just get the theorem from the classical LSH algorithm.

We now define a,b such that ap−1+α2+bpα2=a+b and ap−1+α1+bpα1=nρ. By the previous calculations this will guarantee the number of false positives is not more than the number of tables, and a constant success probability.

We can achieve this by taking

We note that both values are non-negative, since α∈[0,1].

When actually implementing the LSH algorithm width High-Low buckets, these are the values you should use for the number of respectively the high and low probability tables. That will ensure you take full advantage of when α is not worst case, and you may do even better than the theorem assumes.

To complete the theorem we need to prove a+b≤nρpρ−11. For this we bound

is the Kullback-Leibler divergence. The two inequalities are proven in the Appendix as

lemma 1 and lemma 3. The first bound comes from maximizing over α, so in principle we might be able to do better if κ=lognlog1/p2 is close to an integer. The second bound is harder, but the realization that the left hand side can be written on the form of a divergence helps a lot. The bound is tight up to a factor 2, so no significant improvement is possible.

Finally we can boost the success probability from 1−2/e≈0.26 to 99% by repeating the entire data-structure 16 times.

We first show that f(α) is log-concave, which implies it is maximized at the unique α such that f′(α)=0. Log-concavity follows easily by noting

which implies f(α) is maximized in

Plugging into f yields the lemma.

Note that f(α) is not regularly concave as p1 and p2 gets small enough. Hence the use of log-concavity is necessary.

Next, we state a useful inequality, which is needed for the last proof.

Using the upper bound of lemma 2 it follows directly that x∈(0,r). This suffices to show the first inequality of (21), since for x≤r we have 1−r1−x≤1 and so the second term of D(r∥x) is non-positive.

For the second inequality, we note that it is equivalent after manipulations to x≥rp1/r−1. Plugging in x, and after more simple manipulations, that’s equivalent in the range to p1/r≥1−1−pr, which is lemma 2.

This finishes the proof of lemma 3.

It’s somewhat surprising that the last argument in the proof of lemma 3 works, since if we had plugged the lower bound from lemma 2 directly into the problem we would have had

which is much weaker than what we prove, and not even defined for p+r<1.