Rectified Linear Units (ReLU) have become the main model for the neural units in current deep learning systems. This choice has been originally suggested as a way to compensate for the so called vanishing gradient problem which can undercut stochastic gradient descent (SGD) learning in networks composed of multiple layers. Here we provide analytical results on the effects of ReLUs on the capacity and on the geometrical landscape of the solution space in two-layer neural networks with either binary or real-valued weights. We study the problem of storing an extensive number of random patterns and find that, quite unexpectedly, the capacity of the network remains finite as the number of neurons in the hidden layer increases, at odds with the case of threshold units in which the capacity diverges. Possibly more important, a large deviation approach allows us to find that the geometrical landscape of the solution space has a peculiar structure: while the majority of solutions are close in distance but still isolated, there exist rare regions of solutions which are much more dense than the similar ones in the case of threshold units. These solutions are robust to perturbations of the weights and can tolerate large perturbations of the inputs. The analytical results are corroborated by numerical findings. 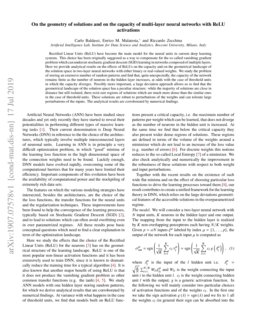 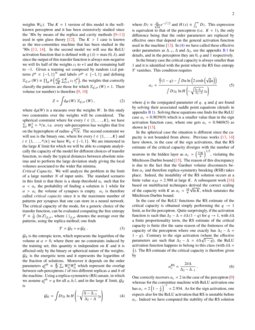 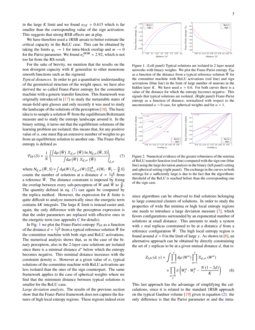 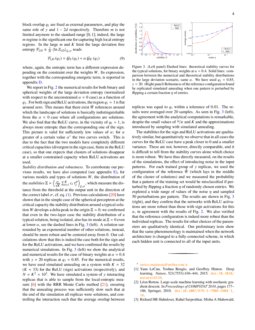 An Exponential Improvement on the Memorization Capacity of Deep Threshold Networks

Our model is a tree-like committee machine with N weights Wli divided into K groups of \nicefracNK entries. We use the index l=1,…,K for the group and i=1,…,NK for the entry. We consider two cases, the binary case Wli=±1for all l,i and the continuous case with spherical constraints on each group, ∑N/Ki=1W2li=N/K for all l.

The training set consists of p=αN random binary i.i.d. patterns. The inputs are denoted by ξμli and the outputs by σμ, where μ=1,…,p is the pattern index.

In our analysis, we write the model using a generic activation function g(x) for the first layer (hidden) units. We will consider two cases: the sign case g(x)=sgn(x) and the ReLU case g(x)=max(0,x). The output of any given unit l in response to a pattern μ is thus written as

A configuration of the weights W solves the training problem if it classifies correctly all the patterns; we denote this with the indicator function

where Θ(x)=1 if x>0 and 0 otherwise is the Heaviside step function.

where dμ(W) is the flat measure over the admissible values of the W, depending on whether we’re analyzing the binary or the spherical case. The average of the log-volume over the distribution of the patterns, ⟨logZ⟩ξ,σ, is the free entropy of the model F. We can evaluate it in the large N limit with the the “replica trick”, using the formula logZ=limn→0∂nZn, computing the average for integer n and then taking the limit n→0.

As explained in the main text, in all cases the resulting expression takes the form

where the GS part is only affected by the spherical or binary nature of the weights, whereas the GE part is only affected by K and by the activation function g. Determining their value requires to compute a saddle-point over some overlap parameters qabl with a,b=1,…,n representing overlaps between replicas, and their conjugates ^qabl; in turn, this requires an ansatz about the structure of the saddle-point in order to perform the n→0 limit.

For the spherical weights, the GS part (before the n→0 limit) reads

while for the binary case we have a very similar expression, except that the summations don’t have the a=b case and the integral over Wa becomes a summation:

In all cases, we study the problem in the large K

limit, which allows to invoke the central limit theorem and leads to a crucial simplification of the expressions.

In the replica-symmetric (RS) case we seek solutions of the form qabl=δab+(1−δab)q for all l,a,b, where δab is the Kronecker delta symbol, and similarly for the conjugated parameters, ^qabl=δab^Q+(1−δab)^q for all l,a,b. The resulting expressions, as reported in the main text, are:

The values of the overlaps and conjugated parameters are found by setting to 0 the derivatives of the free entropy.

The critical capacity αc is found in the binary case by seeking numerically the value of α for which the saddle point solutions returns a zero free entropy.For the spherical case, instead, αc is determined by finding the value of α such that q→1, which can be obtained analytically by reparametrizing q=1−δq and expanding around δq≪1. In this limit, we must also reparametrize Δ using Δ2−Δ=δΔδqx, where x is an exponent that depends on the activation function: it is x=\nicefrac12 for the sign and x=1 for the ReLU. Due to this difference in this exponent, αc diverges in the sign activation case (as was shown in (barkai1992broken, ; engel1992storage, )), while for the ReLU activations it converges to 2(1−1π)−1. However, the RS result for the spherical case is only an upper bound, and a more accurate result requires replica-symmetry breaking.

In the one-step replica-symmetry-breaking (1-RSB) ansatz we seek solutions with 3 possible values of the overlaps qabl and their conjugates. We group the n replicas in nm groups of m replicas each, and denote with q0 the overlaps among different groups and with q1 the overlaps within the same group. As before, the self overlap is qaa=1 and its conjugate ^qaa=^Q (these are only relevant in the spherical case).

The resulting expressions are:

Similarly to the RS case, in order to determine the critical capacity αc in the spherical case, we need to find the value of α such that q1→1. In this case however we must also have m→0. The scaling is such that ~m=m/(1−q1) is finite. The final expression reads

The expression of δΔ is the same as in the RS case using Δ1 instead of Δ; the values of q0 and ~m are determined by saddle point equations as usual.

where Nξ,σ(~W,S)=∫dμ(W)Xξ,σ(W)∏Kl=1δ(Wl⋅~Wl−NKS) counts the number of solutions at a distance 1−S2 from the reference ~W. In this expression, ~W represents a typical solution. The evaluation of this quantity requires the use of two sets of replicas: n replicas of the reference configuration ~W, for which we use the indices a and b, and r replicas of the surrounding configurations W, for which we use the indices c and d. The computation proceeds following standard steps, leading to these expressions, written in terms of the overlaps qabl=KN∑N/Ki=1~Wali~Wbli, pcdl=KN∑N/Ki=1WcliWdli, tacl=KN∑N/Ki=1~WaliWcli and their conjugate quantities:

The calculation proceeds by taking the RS ansatz with the same structure as that of sec. B.1 and the limit n→0, r→0. We obtain, in the large K limit:

where we introduced the auxiliary quantities Σ0, Σ1, Γ, D0, D1 and Δ3 which depend on the choice of the activation function (like the Δ−1/0/1/2 of the previous section). For the sign activations we get:

For the ReLU activations we get:

In order to find the order parameters for any given α and S, we need to set to 0 the derivatives of the free entropy w.r.t. the order parameters q, p, t and the conjugates ^Q, ^q, ^P, ^p, ^t, ^S, thus obtaining a system of 9 equations (7 for the binary case) to be solved numerically. The equations actually reduce to 6 (5 in the binary case) since q, ^Q and ^q are the same ones derived from the typical case (sec. B.1).

Following (baldassi2019shaping, ), the large deviation analysis for the description of the high-local-entropy landscape uses the same equations as the standard 1RSB expressions eqs. (20), (21) and (22). In this case, however, the overlap q1 is not determined by a saddle point equation, but rather it is treated as an external parameter that controls the mutual overlap between the y replicas of the system. Also, the parameter m is not optimized and it is not restricted to the range [0,1]; instead, it plays the role of the number of replicas y and it is generally taken to be large (we normally use either a large integer number to compare the results with numerical simulations, or we take the limit m→∞). For these reason, there are two saddle point equations less compared to the standard 1RSB calculation.

The resulting expression for the free entropy FLD(q1) represents, in the spherical case, the log-volume of valid configurations (solutions at the correct overlap) of the system of y replicas. These configurations are thus embedded in SKy where S is the \nicefracNK-dimensional sphere of radius √\nicefracNK. In order to quantify the solution density, we must normalize FLD(q1), subtracting the log-volume of all the admissible configurations at a given q1 without the solution constraint (which is obtained by the analogous computation with α=0). The resulting quantity is thus upper-bounded by 0 (cf. Fig. (2) of the main text). For the binary case, FLD(q1) is the log of the number of admissible solutions, and the same normalization procedure can be applied.

In the m→∞ case the order parameters q0 and ^q0 need to be rescaled with m and reparametrized with two new quantities δq0 and δ^q0, as follows:

As a consequence, we also reparametrize Δ0 with a new parameter δΔ0 defined as:

The stability for a given pattern/label pair ξ∗,σ∗ is defined as:

where we arbitrarily chose the first pattern/label pair ξ1, σ1 without loss of generality. The expression can be computed by the replica method as usual, and the order parameters are simply obtained from the solutions of the saddle point equations for the free entropy. The resulting expression at the RS level is:

In the large deviation case, we simply compute the expression with a 1RSB ansatz and fix q1 and m as described in the previous section. The resulting expression is

where the effective parameters Δ−1 , Δ0, Δ1 and Δ2 are the same defined in section B.2. In the m→∞ limit the previous expression reduces to