On the convergence of gradient descent for two layer neural networks 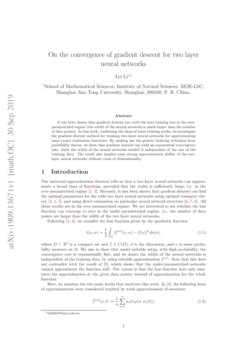 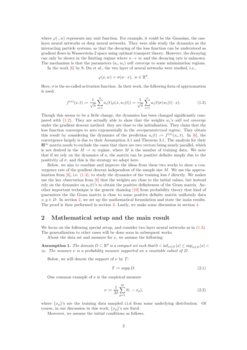 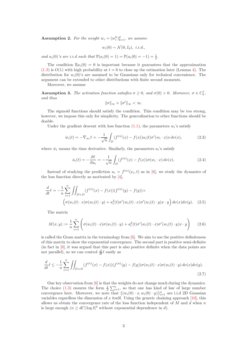 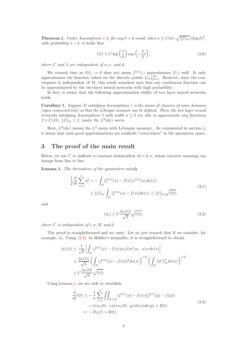 The universal approximation theorem tells us that a two-layer neural networks can approximate a broad class of functions, provided that the width is sufficiently large, i.e. in the over-parametrized regime [1, 2]. Recently, it has been shown that gradient descent can find the optimal parameters for the wide two layer neural networks using optimal transport theory [3, 4, 5]

Following [4, 6], we consider the loss function given by the quadratic function

where D⊂Rd is a compact set and f∈C(D), d is the dimension, and ν is some probability measure on D. We aim to show that under suitable setup, with high probability, the convergence rate is exponentially fast, and we desire the width of the neural networks is independent of the training data, by using suitable approximation f(n). Note that this does not contradict with the result of [9], which shows that the under-parametrized networks cannot approximate the function well. The reason is that the loss function here only measures the approximation at the given data points, instead of approximation for the whole function.

Here, we mention the two main works that motivate this work. In [4], the following form of approximations were considered inspired by weak approximation of measures

where φ(⋅,w) represents any unit function. For example, it could be the Gaussian, the one-layer neural networks or deep neural networks. They were able study the dynamics as the interacting particle systems, so that the decaying of the loss function can be understood as gradient flows in Wasserstein-2 space using optimal transport theory. However, the decaying can only be shown in the limiting regime where n→∞ and the decaying rate is unknown. The mechanism is that the parameters (ai,wi) will converge to some minimization regions.

is the so-called activation function. In their work, the following form of apprxomation is used:

Though this seems to be a little change, the dynamics has been changed significantly compared with (1.2). They are actually able to show that the weights wi’s will not converge under the gradient descent method: they are close to the initialization. They claim that the loss function converges to zero exponentially in the overparamterized regime. They obtain this result by considering the dynamics of the prediction ui(t):=f(n)(xi,t). In [6], the convergence largely is due to their Assumption 3.1 and Theorem 3.1. The analysis for their H∞

matrix needs to exclude the cases that there are two vectors being nearly parallel, which is not desired in the

M→∞ regime, where M is the number of training data. We note that if we rely on the dynamics of a, the matrix can be positive definite simply due to the positivity of σ, and this is the strategy we adopt here.

Below, we aim to combine and improve the ideas from these two works to show a convergence rate of the gradient descent independent of the sample size M. We use the approximation from [6], i.e. (1.3), to study the dynamics of the training loss ℓ directly. We makes use the key observation from [6] that the weights are close to the initial values, but instead rely on the dynamics on ai(t)’s to obtain the positive definiteness of the Gram matrix. Another important technique is the generic chaining [10] from probability theory that kind of guarantees the the Gram matrix is close to some positive definite matrix uniformly data x,y∈D. In section 2, we set up the mathematical formulation and state the main results. The proof is then performed in section 3. Lastly, we make some discussion in section 4.

2 Mathematical setup and the main result

We focus on the following special setup, and consider two layer neural networks as in (1.3). The generalization to other cases will be done soon in subsequent works.

About the data set and measure for x, we assume the following:

The domain D⊂Rd is a compact set such that 0<infx∈D|x|≤supx∈D|x|<∞. The measure ν is a probability measure supported on a countable subset of D.

Below, we will denote the support of ν by T:

One common example of ν is the empirical measure

where {xp}’s are the training data sampled i.i.d from some underlying distribution. Of course, in our discussion in this work, {xp}’s are fixed.

Moreover, we assume the initial conditions as follows.

For the weight wi=(wki)dk=1, we assume

The condition Eai(0)=0 is important because it guarantees that the approximation (1.3) is O(1) with high probability at t=0 to close up the estimation later (Lemma 4). The distribution for wi(0)

’s are assumed to be Gaussians only for technical convenience. The argument can be extended to other distributions with finite second moments.

Under the gradient descent with loss function (1.1), the parameters wi’s satisfy

Instead of studying the prediction ui=f(n)(xi,t) as in [6], we study the dynamics of the loss function directly as motivated by [4],

is called the Gram matrix in the terminology from [6]. We aim to use the positive definiteness of this matrix to show the exponential convergence. The second part is positive semi-definite (in fact in [6], it was argued that this part is also positive definite when the data points are not parallel), so we can control ddtℓ easily as

One key observation from [6] is that the weights do not change much during the dynamics. The choice (1.3) ensures the form 1n∑ni=1

, so that one has kind of law of large number convergence here. Moreover, we note that

{(wi(0)⋅x,wi(0)⋅y)}ni=1 are i.i.d 2D Gaussian variables regardless the dimension of x itself. Using the generic chaining approach [10], this allows us obtain the convergence rate of the loss function independent of M and d when n is large enough (n≥dC|logδ|2 without exponential dependence in d).

where C and λ are independent of n,ν, and d.

We remark that as ℓ(t)→0 does not mean f(n)(⋅) approximates f(⋅) well. It only approximates the function values on the discrete points {xp}Mp=1. However, since the convergence is independent of M, this result somehow says that any continuous function can be approximated by the two-layer neural networks with high probability.

In fact, it seems that the following approximation ability of two layer neural networks holds.

Here, L2(dx) means the L2 norm with Lebesgue measure,. As commented in section 4, it seems that such good approximations are available ”everywhere” in the parameter space.

3 The proof of the main result

Below, we use C to indicate a constant independent of ν d,n, whose concrete meaning can change from line to line.

The derivatives of the parameters satisfy

where C is independent of i,n,M and d.

Using Lemma 1, we are able to establish:

where we have introduced

First of all, one finds

where we have used the fact that

The claim then follows. ∎

We are now in a position to take n→∞ in Dn(t). In particular, we need to estimate

For fixed x,y, it is clear that this converges to

and the rate is independent of d. However, to obtain the uniform convergence rate for Dn(x,y) is challenging. The usual technique is the union bound, which gives a quantity involving M2, and this further requires the over-parametrized regime. One may also use the convergence of empirical measures in the so called Wasserstein spaces [11], which yields a quantity independent of the training data, but suffers from curse of dimensionality. In our problem here, we are essentially considering the projections of high dimensional Gaussians. Hence, we expect the convergence rate will not suffer from curse of dimensionality. We find that the generic chaining approach in [10, 12] useful.

We introduce the following result essentially derived from [12, Proposition 2.2] and the proof of [12, Theorem 1.1]. The proof is then deferred to Appendix A using generic chaining approach.

Suppose that for any given x, {Yix}’s are independent, and for any x≠y, Yix and Yjy are independent for i≠j. Moreover, {Yix}’s have the same distribution, satisfying the following.

then there is a parameter γ2 only depending on D with magnitude γ2≤C√d, such that for any small δ>0 and T⊂D that is countable, when n≥Cγ22(log(1δ))2, with probability 1−δ,

where C is independent of d,T,n.

We now move to the estimates of Dn(t). We have

Clearly, we need to identity

Note that the boundedness of σ is also used here for the Bernstein inequality in Appendix A. Consequently, when (3.9) holds, one has

Now, we move onto the initial values of ℓ(0). If we identify

For any small δ>0, with probability 1−δ, it holds that

The proof is done via the Rademacher complexity, and we refer the readers to [8].

Now, we estimate the Gram matrix.

There exists λ>0 independent of d,n,M such that

Now, we should estimate P((z1,z2)∈I×I). The expectation can be rewritten as

where ζ1 and ζ2 are independent standard normal variables, and

We are now able to prove the main result.

We first of all note that ℓ(t) is nonincreasing. We now consider a fixed ω∈Ac. Then, all the quantities below are essentially discussed for such ω, and we omit this dependence for convenience.

still holds. Then, by continuity, there exists ϵ>0 such that on t∈(Tb,Tb+ϵ) this still holds. This then contradicts with the definition of Tb.

We now move to the corollary regarding approximation.

We fix ϵ>0. Clearly, one can use a function that is Lipschitz to approximate f with small error under L2 norm. Hence, we assume that f is Lipschitz.

We first of all have the following estimates:

is the empirical measure for data {xp}Mp=1.

By the standard result of convergence empirical measures [11], there exists such νM with M≫1 such that,

where W1 is the Wasserstein distance.

The important consequence of Theorem 1 is that n is independent of νM (and thus M).

Now, we fix such t>0 and estimate the Lipschitz constant of |f(x)−f(n)|2. The gradient of this function is

Current works show the convergence of loss function in the overparametrized regime for neural networks. By considering the loss function directly, we obtain the decay of the loss function in a rate independent of the number of training data, where the approximation is given specifically by (1.3). The key observation was made by S. Du et al that the weights are close to the initialization. In this sense, the loss function has global minimizations “everywhere” in the parameter space. As we have seen, the proof works for large number of data M→∞, and as Corollary 1

indicates, the parameters that can achieve the good approximation seems to be available ”everywhere” in the parameter space, which we strongly believe leads to the good performance of stochastic gradient descent. If we instead use the approximation of the form (

1.2) inspired by mean field limit, then one must wait the weights to converge to some specific regions to gain global minimization. This probably means the approximation (1.3) has larger capacity and may be used to explain why SGD behaves well.

There are many instant subsequent works, for example, one may explore whether the ideas and techniques here can be applied to improve the the generalization error estimates in literature, and to get better explanation of why stochastic gradient descent works well. These should be challenging but exciting problems.

Appendix A Proof of Proposition 1

The proof divides into several steps.

where {Yix−Yiy}’s are still independent with mean zero. By Bernstein inequality [13], one has for any x,y

Hence, one defines the metric (note that the maximum of two metrics is still a metric)

Now consider the domain D equipped with the metric g in (A.4). Define a number

where Ts⊂D is a set containing 22s points. The inf is taken over the collections of such sets {Ts}∞s=0. From s to s+1, the number of points in Ts is squared. Hence, the distance g(x,Ts) decays double exponentially if the sequence {Ts} is chosen suitably. Hence, γα is well-defined. For a given Ts, for every x∈D, there must be y∈Ts, such that

Let ge(x,Ts):=infy∈Ts|x−y| be the usual Euclidean distance, and we find that on the suitable sequence of subsets, √ge(x,Ts)∼ge(x,Ts−1). Hence, the number γα is comparable to

By the definition of γ2, we are able to choose the collection of {Ts} such that

which holds for all x∈D.