On the Convergence of Adaptive Gradient Methods for Nonconvex Optimization

Adaptive gradient methods are workhorses in deep learning. However, the convergence guarantees of adaptive gradient methods for nonconvex optimization have not been sufficiently studied. In this paper, we provide a sharp analysis of a recently proposed adaptive gradient method namely partially adaptive momentum estimation method (Padam) (Chen and Gu, 2018), which admits many existing adaptive gradient methods such as AdaGrad, RMSProp and AMSGrad as special cases. Our analysis shows that, for smooth nonconvex functions, Padam converges to a first-order stationary point at the rate of O((∑_i=1^dg_1:T,i_2)^1/2/T^3/4 + d/T), where T is the number of iterations, d is the dimension, g_1,...,g_T are the stochastic gradients, and g_1:T,i = [g_1,i,g_2,i,...,g_T,i]^. Our theoretical result also suggests that in order to achieve faster convergence rate, it is necessary to use Padam instead of AMSGrad. This is well-aligned with the empirical results of deep learning reported in Chen and Gu (2018). 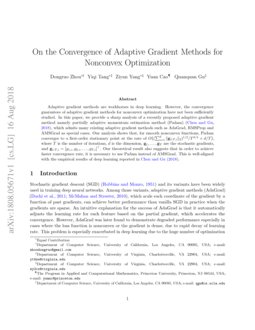 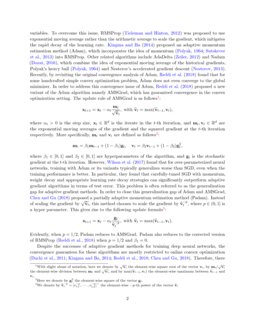 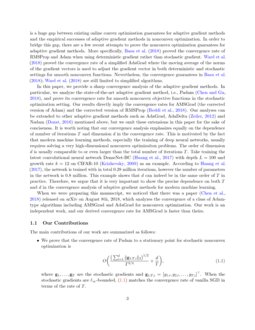 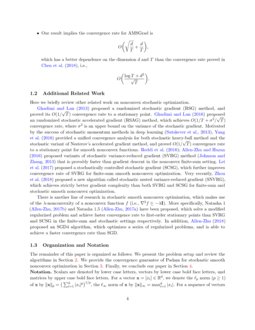 and its variants have been widely used in training deep neural networks. Among those variants, adaptive gradient methods (AdaGrad)

, which scale each coordinate of the gradient by a function of past gradients, can achieve better performance than vanilla SGD in practice when the gradients are sparse. An intuitive explanation for the success of AdaGrad is that it automatically adjusts the learning rate for each feature based on the partial gradient, which accelerates the convergence. However, AdaGrad was later found to demonstrate degraded performance especially in cases where the loss function is nonconvex or the gradient is dense, due to rapid decay of learning rate. This problem is especially exacerbated in deep learning due to the huge number of optimization variables. To overcome this issue, RMSProp

(Tieleman and Hinton, 2012) was proposed to use exponential moving average rather than the arithmetic average to scale the gradient, which mitigates the rapid decay of the learning rate. Kingma and Ba (2014) proposed an adaptive momentum estimation method (Adam), which incorporates the idea of momentum (Polyak, 1964; Sutskever et al., 2013) into RMSProp. Other related algorithms include AdaDelta (Zeiler, 2012) and Nadam (Dozat, 2016), which combine the idea of exponential moving average of the historical gradients, Polyak’s heavy ball (Polyak, 1964) and Nesterov’s accelerated gradient descent (Nesterov, 2013). Recently, by revisiting the original convergence analysis of Adam, Reddi et al. (2018) found that for some handcrafted simple convex optimization problem, Adam does not even converge to the global minimizer. In order to address this convergence issue of Adam, Reddi et al. (2018) proposed a new variant of the Adam algorithm namely AMSGrad, which has guaranteed convergence in the convex optimization setting. The update rule of AMSGrad is as follows111With slight abuse of notation, here we denote by √vt

the element-wise square root of the vector

where αt>0 is the step size, xt∈Rd is the iterate in the t-th iteration, and mt,vt∈Rd are the exponential moving averages of the gradient and the squared gradient at the t-th iteration respectively. More specifically, mt and vt are defined as follows222Here we denote by g2t the element-wise square of the vector gt.:

are hyperparameters of the algorithm, and

gt is the stochastic gradient at the t-th iteration. However, Wilson et al. (2017) found that for over-parameterized neural networks, training with Adam or its variants typically generalizes worse than SGD, even when the training performance is better. In particular, they found that carefully-tuned SGD with momentum, weight decay and appropriate learning rate decay strategies can significantly outperform adaptive gradient algorithms in terms of test error. This problem is often referred to as the generalization gap for adaptive gradient methods. In order to close this generalization gap of Adam and AMSGrad, Chen and Gu (2018) proposed a partially adaptive momentum estimation method (Padam). Instead of scaling the gradient by √^vt, this method chooses to scale the gradient by ^v−pt, where p∈(0,1] is a hyper parameter. This gives rise to the following update formula333We denote by ^v−pt=[v−pt,1,⋯,v−pt,d]⊤ the element-wise −p-th power of the vector ^vt:

In this paper, we provide a sharp convergence analysis of the adaptive gradient methods. In particular, we analyze the state-of-the-art adaptive gradient method, i.e., Padam (Chen and Gu, 2018), and prove its convergence rate for smooth nonconvex objective functions in the stochastic optimization setting. Our results directly imply the convergence rates for AMSGrad (the corrected version of Adam) and the corrected version of RMSProp (Reddi et al., 2018). Our analyses can be extended to other adaptive gradient methods such as AdaGrad, AdaDelta (Zeiler, 2012) and Nadam (Dozat, 2016) mentioned above, but we omit these extensions in this paper for the sake of conciseness. It is worth noting that our convergence analysis emphasizes equally on the dependence of number of iterations T and dimension d

in the convergence rate. This is motivated by the fact that modern machine learning methods, especially the training of deep neural networks, usually requires solving a very high-dimensional nonconvex optimization problem. The order of dimension

(Huang et al., 2017) with depth L=100 and growth rate k=12 on CIFAR-10 (Krizhevsky, 2009) as an example. According to Huang et al. (2017), the network is trained with in total 0.28 million iterations, however the number of parameters in the network is 0.8 million. This example shows that d can indeed be in the same order of T in practice. Therefore, we argue that it is very important to show the precise dependence on both T and d in the convergence analysis of adaptive gradient methods for modern machine learning.

When we were preparing this manuscript, we noticed that there was a paper (Chen et al., 2018) released on arXiv on August 8th, 2018, which analyzes the convergence of a class of Adam-type algorithms including AMSGrad and AdaGrad for nonconvex optimization. Our work is an independent work, and our derived convergence rate for AMSGrad is faster than theirs.

The main contributions of our work are summarized as follows:

is an upper bound on the variance of the stochastic gradient. Motivated by the success of stochastic momentum methods in deep learning

There is another line of research in stochastic smooth nonconvex optimization, which makes use of the λ-nonconvexity of a nonconvex function f (i.e., ∇2f⪰−λI). More specifically, Natasha 1 (Allen-Zhu, 2017b) and Natasha 1.5 (Allen-Zhu, 2017a) have been proposed, which solve a modified regularized problem and achieve faster convergence rate to first-order stationary points than SVRG and SCSG in the finite-sum and stochastic settings respectively. In addition, Allen-Zhu (2018) proposed an SGD4 algorithm, which optimizes a series of regularized problems, and is able to achieve a faster convergence rate than SGD.

The remainder of this paper is organized as follows: We present the problem setup and review the algorithms in Section 2. We provide the convergence guarantee of Padam for stochastic smooth nonconvex optimization in Section 3. Finally, we conclude our paper in Section 4.

In this section, we first introduce the preliminary definitions used in this paper, followed by the problem setup of stochastic nonconvex optimization. Then we review the state-of-the-art adaptive gradient method, i.e., Padam (Chen and Gu, 2018), along with AMSGrad (the corrected version of Adam) (Reddi et al., 2018) and the corrected version of RMSProp (Tieleman and Hinton, 2012; Reddi et al., 2018).

f(x;ξ):Rd→R is a L-smooth nonconvex function. In the stochastic setting, one cannot directly access the full gradient of f(x)

. Instead, one can only get unbiased estimators of the gradient of

The Padam algorithm is given in Algorithm 1. It is originally proposed by Chen and Gu (2018) to improve the generalization performance of adaptive gradient methods. As is shown in Algorithm 1, the learning rate of Padam is αt^V−pt, where p is a partially adaptive parameter. With this parameter p, Padam unifies AMSGrad and SGD with momentum, and gives a general framework of algorithms with exponential moving average. Padam reduces to the AMSGrad algorithm when p=1/2. If p=1/2 and β1=0, Padam reduces to a corrected version of the RMSProp algorithm given by Reddi et al. (2018). As important special cases of Padam, we show AMSGrad and the corrected version of RMSProp in Algorithms 2 and 3 respectively.

In this section we present our main theoretical results. We first introduce the following assumptions.

[Bounded Gradient] f(x)=Eξf(x;ξ) has G∞-bounded stochastic gradient. That is, for any ξ, we assume that

Assumption 3 is a standard assumption frequently used in analysis of gradient-based algorithms. It is equivalent to the L-gradient Lipschitz condition, which is often written as ∥∇f(x)−∇f(y)∥2≤L∥x−y∥2.

We are now ready to present our main result.

Corollary 3 simplifies the result of Theorem 3 by choosing q=0 under the condition p∈[0,1/4]. We remark that this choice of q is optimal in an important special case studied in Duchi et al. (2011); Reddi et al. (2018): when the gradient vectors are sparse, we assume that ∑di=1∥g1:T,i∥2≪√dT. Then for q>0, it follows that

(4) implies that the upper bound provided by (3) is strictly better than (2) with q>0. Therefore when the gradient vectors are sparse, Padam achieves faster convergence when p is located in [0,1/4]. We show the convergence rate under different choices of step size α. If

which matches the rate O(1/√T) achieved by nonconvex SGD (Ghadimi and Lan, 2016), considering the dependence of T.

which matches the convergence result in nonconvex SGD (Ghadimi and Lan, 2016) considering the dependence of T.

Next we show the convergence analysis of two popular algorithms: AMSGrad and RMSProp. Since AMSGrad and RMSProp can be seen as two specific instances of Padam, we can apply Theorem 3 with specific parameter choice, and obtain the following two corollaries.

where {MAi}3i=1 are defined as follows:

It can be seen that the dependence of d in their bound is quadratic, which is worse than the linear dependence implied by (7). Moreover, by Corollary 3, Corollary 3 and (4), it is easy to see that Padam with p∈[0,1/4] is faster than AMSGrad where p=1/2, which backups the experimental results in Chen and Gu (2018).

[corrected version of RMSProp] Under the same conditions of Theorem 3, for RMSProp in Algorithm 3, if αt=α=1/√dT for t=1,…,T, then the output xout satisfies that

where {MRi}3i=1 are defined in the following:

In this paper, we provided a sharp analysis of the state-of-the-art adaptive gradient method Padam (Chen and Gu, 2018), and proved its convergence rate for smooth nonconvex optimization. Our results directly imply the convergence rates of AMSGrad and the corrected version of RMSProp for smooth nonconvex optimization. In terms of the number of iterations T, the derived convergence rates in this paper match the O(1/√T) rate achieved by SGD; in terms of dimension d, our results give better rate than existing work. Our results also offer some insights into the choice of the partially adaptive parameter p in the Padam algorithm: when the gradients are sparse, Padam with p∈[0,1/4] achieves the fastest convergence rate. This theoretically backups the experimental results in existing work (Chen and Gu, 2018).

We would like to thank Jinghui Chen for discussion on this work.

Appendix A Proof of the Main Theory

Here we provide the detailed proof of the main theorem.

Let x0=x1. To prove Theorem 3, we need the following lemmas:

To deal with stochastic momentum mt and stochastic weight ^V−pt, following Yang et al. (2016), we define an auxiliary sequence zt as follows: let x0=x1, and for each t≥1,

Lemma A.1 shows that zt+1−zt can be represented in two different ways.

The following two lemmas give bounds on ∥zt+1−zt∥2 and ∥∇f(zt)−∇f(xt)∥2, which play important roles in our proof.

Now we are ready to prove Theorem 3.

Since f is L-smooth, we have:

In the following, we bound I1, I2 and I3 separately.

The first inequality holds because for a positive diagonal matrix \Ab, we have x⊤\Aby≤∥x∥∞⋅∥\Ab∥1,1⋅∥y∥∞. The second inequality holds due to αt−1^V−pt−1⪰αt^V−pt⪰0. Next we bound −∇f(xt)⊤αt^V−ptgt. We have

The first inequality is obtained by introducing Lemma A.1.