We consider finite n-person deterministic graphical (DG) games. These games are modelled by finite directed graphs (digraphs) G which may have directed cycles and, hence, infinite plays. Yet, it is assumed that all these plays are equivalent and form a single outcome c, while the terminal vertices V_T = {a_1, …, a_p} form p remaining outcomes. We study the existence of Nash equilibria (NE) in pure stationary strategies. It is known that NE exist when n=2 and may fail to exist when n > 2. Yet, the question becomes open for n > 2 under the following extra condition: (C) For each of n players, c is worse than each of p terminal outcomes. In other words, all players are interested in terminating the play, which is a natural assumption. Moreover, Nash-solvability remains open even if we replace (C) by a weaker condition: (C22) There exist no two players for whom c is better than (at least) two terminal outcomes. We conjecture that such two players exist in each NE-free DG game, or in other words, that (C22) implies Nash-solvability, for all n. Recently, the DG games were extended to a wider class of the DG multi-stage (DGMS) games, whose outcomes are the strongly connected components (SCC) of digraph G. Merging all outcomes of a DGMS game that correspond to its non-terminal SCCs we obtain a DG game. Clearly, this operation respects Nash-solvability (NS). Basic conditions and conjectures related to NS can be extended from the DG to DGMS games: in both cases NE exist if n=2 and may fail to exist when n > 2; furthermore, we modify conditions (C) and (C22) to adapt them for the DGMS games. Keywords: n-person deterministic graphical (multi-stage) games, Nash equilibrium, Nash-solvability, pure stationary strategy, digraph, directed cycle, strongly connected component. 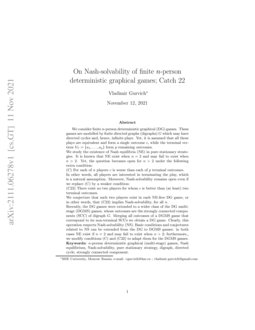 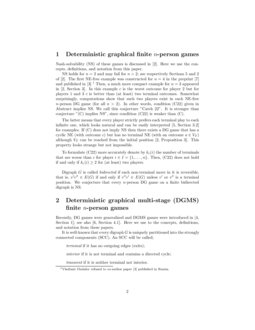 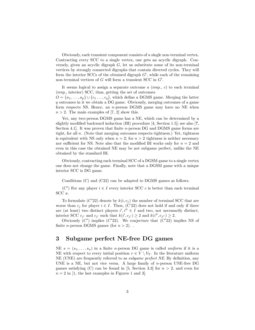 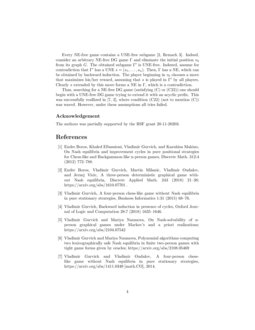 On Nash Equilibria in Normal-Form Games With Vectorial Payoffs

From Behavior to Sparse Graphical Games: Efficient Recovery of Equilibria

In this paper we study the problem of exact recovery of the pure-strateg...
Asish Ghoshal, et al. ∙

Nash-solvability (NS) of these games is discussed in [2]. Here we use the concepts, definitions, and notation from this paper.

NS holds for n=2 and may fail for n>2; see respectively Sections 5 and 2 of [2]. The first NE-free example was constructed for n=4 in the preprint [7] and published in [3] 111Vladimir Oudalov refused to co-author paper [3] published in Russia. Then, a much more compact example for n=3 appeared in [2, Section 3]. In this example c is the worst outcome for player 2 but for players 1 and 3 c is better than (at least) two terminal outcomes. Somewhat surprisingly, computations show that such two players exist in each NE-free n-person DG game (for all n>2). In other words, condition (C22) given in Abstract implies NS. We call this conjecture ”Catch 22”. It is stronger than conjecture ”(C) implies NS”, since condition (C22) is weaker than (C).

The latter means that every player strictly prefers each terminal play to each infinite one, which looks natural and can be easily interpreted [5, Section 3.2] for examples. If (C) does not imply NS then there exists a DG game that has a cyclic NE (with outcome c) but has no terminal NE (with an outcome a∈VT) although VT can be reached from the initial position [2, Proposition 3]. This property looks strange but not impossible.

Digraph G is called bidirected if each non-terminal move in it is reversible, that is, v′v′′∈E(G) if and only if v′′v′∈E(G) unless v′ or v′′ is a terminal position. We conjecture that every n-person DG game on a finite bidirected digraph is NS.

Recently, DG games were generalized and DGMS games were introduced in [4, Section 1]; see also [6, Section 4.1]. Here we use to the concepts, definitions, and notation from these papers.

It is well-known that every digraph G is uniquely partitioned into the strongly connected components (SCC). An SCC will be called;

It seems logical to assign a separate outcome a (resp., c) to each terminal (resp., interior) SCC, thus, getting the set of outcomes O={a1,…,ap}∪{c1…,cq}, which define a DGMS game. Merging the latter q outcomes in it we obtain a DG game. Obviously, merging outcomes of a game form respects NS. Hence, an n-person DGMS game may have no NE when n>2. The main examples of [7, 2] show this.

Yet, any two-person DGMS game has a NE, which can be determined by a slightly modified backward induction (BI) procedure [4, Section 1.5]; see also [MN21B, Section 4.1]. It was proven that finite n-person DG and DGMS game forms are tight, for all n. (Note that merging outcomes respects tightness.) Yet, tightness is equivalent with NS only when n=2; for n>2 tightness is neither necessary nor sufficient for NS. Note also that the modified BI works only for n=2 and even in this case the obtained NE may be not subgame perfect, unlike the NE obtained by the standard BI.

Obviously, contracting each terminal SCC of a DGSM game to a single vertex one does not change the game. Finally, note that a DGSM game with a unique interior SCC is DG game.

Conditions (C) and (C22) can be adapted to DGMS games as follows.

(C′) For any player i∈I every interior SCC c is better than each terminal SCC a.

NE s=(s1,…,sn) in a finite n-person DG game is called uniform if it is a NE with respect to every initial position v∈V∖VT. In the literature uniform NE (UNE) are frequently referred to as subgame perfect NE. By definition, any UNE is a NE, but not vice versa. A large family of n-person UNE-free DG games satisfying (C) can be found in [5, Section 3.3] for n>2, and even for n=2 in [1, the last examples in Figures 1 and 3].

Every NE-free game contains a UNE-free subgame [2, Remark 3]. Indeed, consider an arbitrary NE-free DG game Γ and eliminate the initial position v0 from its graph G. The obtained subgame Γ′ is UNE-free. Indeeed, assume for contradiction that Γ′ has a UNE s=(s1,…,sn). Then, Γ has a NE, which can be obtained by backward induction. The player beginning in v0 chooses a move that maximizes his/her reward, assuming that s is played in Γ′ by all players. Clearly s extended by this move forms a NE in Γ, which is a contradiction.

Thus, searching for a NE-free DG game (satisfying (C) or (C22)) one should begin with a UNE-free DG game trying to extend it with an acyclic prefix. This was successfully reallized in [7, 2], where condition (C22) (not to mention (C)) was waved. However, under these assumptions all tries failed.