Two recently introduced criteria for estimation of generative models are both based on a reduction to binary classification. Noise-contrastive estimation (NCE) is an estimation procedure in which a generative model is trained to be able to distinguish data samples from noise samples. Generative adversarial networks (GANs) are pairs of generator and discriminator networks, with the generator network learning to generate samples by attempting to fool the discriminator network into believing its samples are real data. Both estimation procedures use the same function to drive learning, which naturally raises questions about how they are related to each other, as well as whether this function is related to maximum likelihood estimation (MLE). NCE corresponds to training an internal data model belonging to the discriminator network but using a fixed generator network. We show that a variant of NCE, with a dynamic generator network, is equivalent to maximum likelihood estimation. Since pairing a learned discriminator with an appropriate dynamically selected generator recovers MLE, one might expect the reverse to hold for pairing a learned generator with a certain discriminator. However, we show that recovering MLE for a learned generator requires departing from the distinguishability game. Specifically: (i) The expected gradient of the NCE discriminator can be made to match the expected gradient of MLE, if one is allowed to use a non-stationary noise distribution for NCE, (ii) No choice of discriminator network can make the expected gradient for the GAN generator match that of MLE, and (iii) The existing theory does not guarantee that GANs will converge in the non-convex case. This suggests that the key next step in GAN research is to determine whether GANs converge, and if not, to modify their training algorithm to force convergence. 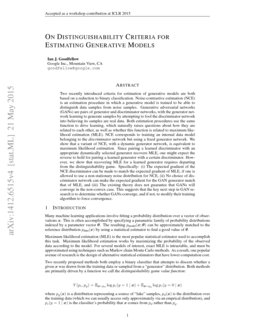 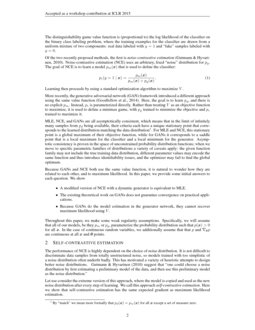 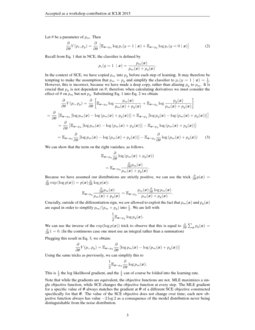 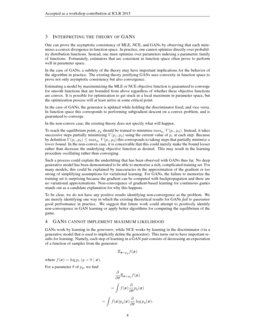 One of the most significant challenges in statistical signal processing ...
Pegah Salehi, et al. ∙

WGAN with an Infinitely Wide Generator Has No Spurious Stationary Points

An Adversarial Approach to Structural Estimation

KGAN: How to Break The Minimax Game in GAN

x. This is often accomplished by specifying a parametric family of probability distributions indexed by a parameter vector θ. The resulting pmodel(x;θ) can be approximately matched to the reference distribution pdata(x) by using a statistical estimator to find a good value of θ.

Maximum likelihood estimation (MLE) is the most popular statistical estimator used to accomplish this task. Maximum likelihood estimation works by maximizing the probability of the observed data according to the model. For several models of interest, exact MLE is intractable, and must be approximated using techniques such as Markov chain Monte Carlo methods. As a result, one popular avenue of research is the design of alternative statistical estimators that have lower computation cost.

x was drawn from the training data or sampled from a “generator” distribution. Both methods are primarily driven by a function we call the distinguishability game value function:

where pg(x) is a distribution representing a source of “fake” samples, pd(x) is the distribution over the training data (which we can usually access only approximately via an emprical distribution), and pc(y=1∣x) is the classifier’s probability that x comes from pd rather than pg.

The distinguishability game value function is (proportional to) the log likelihood of the classifier on the binary class labeling problem, where the training examples for the classifier are drawn from a uniform mixture of two components: real data labeled with y=1 and “fake” samples labeled with y=0.

Learning then proceeds by using a standard optimization algorithm to maximize V.

More recently, the generative adversarial network (GAN) framework introduced a different approach using the same value function (Goodfellow et al., 2014). Here, the goal is to learn pg, and there is no explicit pm. Instead, pc is parameterized directly. Rather than treating V as an objective function to maximize, it is used to define a minimax game, with pg trained to minimize the objective and pc trained to maximize it.

MLE, NCE, and GANs are all asymptotically consistent, which means that in the limit of infinitely many samples from pd being available, their criteria each have a unique stationary point that corresponds to the learned distribution matching the data distribution111 By “match” we mean more formally that pd(x)=pm(x) for all x except a set of measure zero. . For MLE and NCE, this stationary point is a global maximum of their objective function, while for GANs it corresponds to a saddle point that is a local maximum for the classifier and a local minimum for the generator. Asymptotic consistency is proven in the space of unconstrained probability distribution functions; when we move to specific parametric families of distributions a variety of caveats apply: the given function family may not include the true training data distribution, different parameter values may encode the same function and thus introduce identifiability issues, and the optimizer may fail to find the global optimum.

Because GANs and NCE both use the same value function, it is natural to wonder how they are related to each other, and to maximum likelihood. In this paper, we provide some initial answers to each question. We show

Throughout this paper, we make some weak regularity assumptions. Specifically, we will assume that all of our models, be they pm or pg, parameterize the probability distribution such that p(x)>0 for all x

. In the case of continuous random variables, we additionally assume that that

p and ∇θp are continuous at all x and θ points.

The performance of NCE is highly dependent on the choice of noise distribution. It is not difficult to discriminate data samples from totally unstructured noise, so models trained with too simplistic of a noise distribution often underfit badly. This has motivated a variety of heuristic attempts to design better noise distributions.

Let θ be a parameter of pm. Then

Recall from Eq. 1 that in NCE, the classifier is defined by

In the context of SCE, we have copied pm into pg before each step of learning. It may therefore be tempting to make the assumption that pm=pg and simplify the classifier to pc(y=1∣x)=12. However, this is incorrect, because we have made a deep copy, rather than aliasing pg to pm. It is crucial that pg is not dependent on θ; therefore when calculating derivatives we must consider the effect of θ on pm but not pg. Substituting Eq. 1 into Eq. 2 we obtain

We can show that the term on the right vanishes, as follows.

Because we have assumed our distributions are strictly positive, we can use the trick ∂∂θp(x)=∂∂θexp(logp(x))=p(x)∂∂θlogp(x):

Crucially, outside of the differentiation sign, we are allowed to exploit the fact that pm(x) and pg(x) are equal in order to simplify pm/(pm+pg) into 12. We are left with

We can use the inverse of the exp(logp(x)) trick to observe that this is equal to ∂∂θ∑xpg(x)=∂∂θ1=0. (In the continuous case one must use an integral rather than a summation)

Plugging this result in Eq. 3, we obtain:

Using the same tricks as previously, we can simplify this to

This is 12 the log likelihood gradient, and the 12 can of course be folded into the learning rate.

3 Interpreting the theory of GANs

One can prove the asymptotic consistency of MLE, NCE, and GANs by observing that each minimizes a convex divergence in function space. In practice, one cannot optimize directly over probability distribution functions. Instead, one must optimize over parameters indexing a parametric family of functions. Fortunately, estimators that are consistent in function space often prove to perform well in parameter space.

In the case of GANs, a subtlety of the theory may have important implications for the behavior of the algorithm in practice. The existing theory justifying GANs uses convexity in function space to prove not only asymptotic consistency but also convergence.

Estimating a model by maximimizing the MLE or NCE objective function is guaranteed to converge for smooth functions that are bounded from above regardless of whether these objective functions are convex. It is possible for optimization to get stuck in a local maximum in parameter space, but the optimization process will at least arrive at some critical point.

In the case of GANs, the generator is updated while holding the discriminator fixed, and vice versa. In function space this corresponds to performing subgradient descent on a convex problem, and is guaranteed to converge.

In the non-convex case, the existing theory does not specify what will happen.

To reach the equilibrium point, pg should be trained to minimize maxpcV(pc,pd). Instead, it takes successive steps partially minimizing V(pc,pd) using the current value of pc at each step. Because by definition V(pc,pd)≤maxpcV(pc,pd) this corresponds to taking steps that partially minimize a lower bound. In the non-convex case, it is conceivable that this could merely make the bound looser rather than decrease the underlying objective function as desired. This may result in the learning procedure oscillating rather than converging.

Such a process could explain the underfitting that has been observed with GANs thus far. No deep generative model has been demonstrated to be able to memorize a rich, complicated training set. For many models, this could be explained by inaccuracies in the approximation of the gradient or too strong of simplifying assumptions for variational learning. For GANs, the failure to memorize the training set is surprising because the gradient can be computed with backpropagation and there are no variational approximations. Non-convergence of gradient-based learning for continuous games stands out as a candidate explanation for why this happens.

To be clear, we do not have any positive results identifying non-convergence as the problem. We are merely identifying one way in which the existing theoretical results for GANs fail to guarantee good performance in practice. We suggest that future work could attempt to positively identify non-convergence in GAN learning or apply better algorithms for computing the equilibrium of the game.

For a parameter θ of pg, we find

From this vantage point it is clear that to obtain the maximum likelihood derivatives, we need

is the logistic sigmoid function. Suppose further that our discriminator has converged to its optimal value for the current generator,

Then f(x)=−exp(a(x)). This is clearly different from the value given by the distinguishability game, which simplifies to f(x)=−ζ(a(x)), where ζ is the softplus function. See this function plotted alongside the GAN cost in Fig 1.

In other words, the discriminator gives us the necessary information to compute the maximum likelihood gradient of the generator, but it requires that we abandon the distinguishability game. In practice, the estimator based on exp(a(x)) has too high of variance. For an untrained model, sampling from the generator almost always yields very low values of pd(x)pg(x). The value of the expectation is dominated by the rare cases where the generator manages to sample something that resembles the data by chance. Empirically, GANs have been able to overcome this problem but it is not entirely clear why. Further study is needed to understand exactly what tradeoff GANs are making.

Our analysis has shown a close relationship between noise contrastive estimation and maximum likelihood. We can now interpret noise-contrastive estimation as being a one-sided version of a distinguishability game. Our analysis has also shown that generative adversarial networks are not as closely related to noise contrastive estimation as previously believed. The fact that the primary model is the generator turns out to result in a departure from maximum likelihood even in situations where NCE and MLE are equivalent. Further study is needed to understand exactly what tradeoff is incurred when using adversarial learning. Finally, the problem of non-convergence of independent SGD in the non-convex case may explain the underfitting observed in GANs and suggests the application of better algorithms for solving for the equilibrium strategies of the distinguishability game.

We would like to thank Andrew Dai, Greg Corrado, David Sussillo, Jeff Dean and David Warde-Farley for their feedback on drafts of this article.