It is known that for a ρ-weighted L_q-approximation of single variable functions f with the rth derivatives in a ψ-weighted L_p space, the minimal error of approximations that use n samples of f is proportional to ω^1/α_L_1^αf^(r)ψ_L_pn^-r+(1/p-1/q)_+, where ω=ρ/ψ and α=r-1/p+1/q. Moreover, the optimal sample points are determined by quantiles of ω^1/α. In this paper, we show how the error of best approximations changes when the sample points are determined by a quantizer κ other than ω. Our results can be applied in situations when an alternative quantizer has to be used because ω is not known exactly or is too complicated to handle computationally. The results for q=1 are also applicable to ρ-weighted integration over unbounded domains. 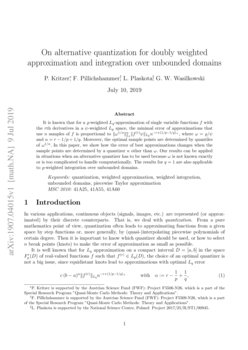 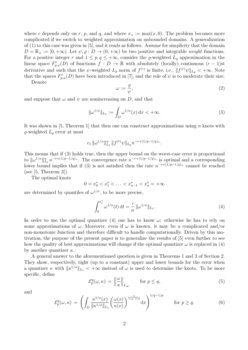 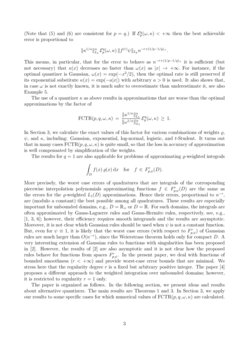 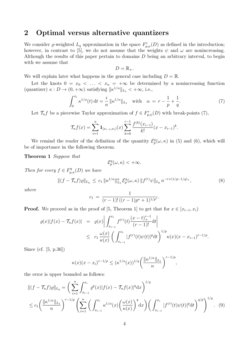 In this paper, we address the problem of approximating a multivariate fu...
Ben Adcock, et al. ∙

This paper is concerned with the approximation of a function u in a give...
Cécile Haberstich, et al. ∙

On the Approximability of Weighted Model Integration on DNF Structures

Weighted ℓ_q approximation problems on the ball and on the sphere

We prove that a variant of the classical Sobolev space of first-order do...
Alexander D. Gilbert, et al. ∙

In various applications, continuous objects (signals, images, etc.) are represented (or approximated) by their discrete counterparts. That is, we deal with quantization

. From a pure mathematics point of view, quantization often leads to approximating functions from a given space by step functions or, more generally, by (quasi-)interpolating piecewise polynomials of certain degree. Then it is important to know which quantizer should be used, or how to select

n break points (knots) to make the error of approximation as small as possible.

It is well known that for Lq approximation on a compact interval D=[a,b] in the space Frp(D) of real-valued functions f such that f(r)∈Lp(D), the choice of an optimal quantizer is not a big issue, since equidistant knots lead to approximations with optimal Lq error

where c depends only on r, p, and q, and where x+:=max(x,0). The problem becomes more complicated if we switch to weighted approximation on unbounded domains. A generalization of (1) to this case was given in [5], and it reads as follows. Assume for simplicity that the domain D=R+:=[0,+∞). Let ψ,ϱ:D→(0,+∞) be two positive and integrable weight functions. For a positive integer r and 1≤p,q≤+∞, consider the ϱ-weighted Lq approximation in the linear space Frp,ψ(D) of functions f:D→R with absolutely (locally) continuous (r−1)st derivative and such that the ψ-weighted Lp norm of f(r) is finite, i.e., ∥f(r)ψ∥Lp<+∞. Note that the spaces Frp,ψ(D) have been introduced in [7], and the role of ψ is to moderate their size.

and suppose that ω and ψ are nonincreasing on D, and that

It was shown in [5, Theorem 1] that then one can construct approximations using n knots with ϱ-weighted Lq error at most

are determined by quantiles of ω1/α, to be more precise,

In order to use the optimal quantizer (4) one has to know ω; otherwise he has to rely on some approximations of ω. Moreover, even if ω is known, it may be a complicated and/or non-monotonic function and therefore difficult to handle computationally. Driven by this motivation, the purpose of the present paper is to generalize the results of [5] even further to see how the quality of best approximations will change if the optimal quantizer ω is replaced in (4) by another quantizer κ.

A general answer to the aforementioned question is given in Theorems 1 and 3 of Section 2. They show, respectively, tight (up to a constant) upper and lower bounds for the error when a quantizer κ with ∥κ1/α∥L1<+∞ instead of ω is used to determine the knots. To be more specific, define

This means, in particular, that for the error to behave as n−r+(1/p−1/q)+ it is sufficient (but not necessary) that κ(x) decreases no faster than ω(x) as |x|→+∞. For instance, if the optimal quantizer is Gaussian, ω(x)=exp(−x2/2), then the optimal rate is still preserved if its exponential substitute κ(x)=exp(−a|x|) with arbitrary a>0 is used. It also shows that, in case ω is not exactly known, it is much safer to overestimate than underestimate it, see also Example 5.

In Section 3, we calculate the exact values of this factor for various combinations of weights ϱ, ψ, and κ, including: Gaussian, exponential, log-normal, logistic, and t-Student. It turns out that in many cases FCTR(p,q,ω,κ) is quite small, so that the loss in accuracy of approximation is well compensated by simplification of the weights.

More precisely, the worst case errors of quadratures that are integrals of the corresponding piecewise interpolation polynomials approximating functions f∈Frp,ψ(D) are the same as the errors for the ϱ-weighted L1(D) approximations. Hence their errors, proportional to n−r, are (modulo a constant) the best possible among all quadratures. These results are especially important for unbounded domains, e.g., D=R+ or D=R. For such domains, the integrals are often approximated by Gauss-Laguerre rules and Gauss-Hermite rules, respectively, see, e.g., [1, 3, 6]; however, their efficiency requires smooth integrands and the results are asymptotic. Moreover, it is not clear which Gaussian rules should be used when ψ is not a constant function. But, even for ψ≡1, it is likely that the worst case errors (with respect to Frp,ψ) of Gaussian rules are much larger than O(n−r), since the Weierstrass theorem holds only for compact D. A very interesting extension of Gaussian rules to functions with singularities has been proposed in [2]. However, the results of [2] are also asymptotic and it is not clear how the proposed rules behave for functions from spaces Frp,ψ. In the present paper, we deal with functions of bounded smoothness (r<+∞) and provide worst-case error bounds that are minimal. We stress here that the regularity degree r is a fixed but arbitrary positive integer. The paper [4] proposes a different approach to the weighted integration over unbounded domains; however, it is restricted to regularity r=1 only.

The paper is organized as follows. In the following section, we present ideas and results about alternative quantizers. The main results are Theorems 1 and 3. In Section 3, we apply our results to some specific cases for which numerical values of FCTR(p,q,ω,κ) are calculated.

We consider ϱ-weighted Lq approximation in the space Frp,ψ(D) as defined in the introduction; however, in contrast to [5], we do not assume that the weights ψ and ω are nonincreasing. Although the results of this paper pertain to domains D being an arbitrary interval, to begin with we assume that

We will explain later what happens in the general case including D=R.

Let Tnf be a piecewise Taylor approximation of f∈Frp,ψ(D) with break-points (7),

We remind the reader of the definition of the quantity Eqp(ω,κ) in (5) and (6), which will be of importance in the following theorem.

Then for every f∈Fqp,ψ(D) we have

If derivatives of f are difficult to compute or to sample, a piecewise Lagrange interpolation Ln can be used, as in [5]. Then the result is slightly weaker than that of the present Theorem 1; namely (cf. [5, Theorem 2]), there exists c′1>0 depending only on p, q, and r, such that

We now show that the error estimate of Theorem

There exists c2>0 depending only on p, q, and r with the following property. For any approximation An that uses only information about function values and/or its derivatives (up to order r−1) at the knots x0,…,xn given by (7), we have

We now comment on what happens when the domain is different from R+. It is clear that Theorems 1 and 3 remain valid for D being a compact interval, say D=[0,c] with c<+∞. Consider

In this case, we assume that κ is nonincreasing on [0,+∞) and nondecreasing on (−∞,0]. We have 2n+1 knots xi, which are determined by the condition

(where ∫−a0=−∫0a). Note that (12) automatically implies x0=0. The piecewise Taylor approximation is also correspondingly defined for negative arguments. With these modifications, the corresponding Theorems 1 and 3 have literally the same formulation for D=R and for D=R+.

From this definition it is clear that for any s,t>0 we have

This quantity satisfies the following estimates.

The rightmost inequality is actually an equality whenever p≤q.

Although the main idea of this paper is to replace ω by another function κ that is easier to handle, our results allow a further interesting observation that is illustrated in the following example.

Since p>q, we have

. It follows that it is safer to overestimate the actual variance

σ2=1 than to underestimate it.

Below we apply our results to specific weights ϱ,ψ, and specific values of p and q.

for positive σ and λ. Since

We now consider the two cases p≤q and p>q separately:

Hence, for p≤q we have that

Note that FCTR(p,q,ω,κa∗) does not depend on σ and λ (as long as λ>σ). For instance, we have the following rounded values: